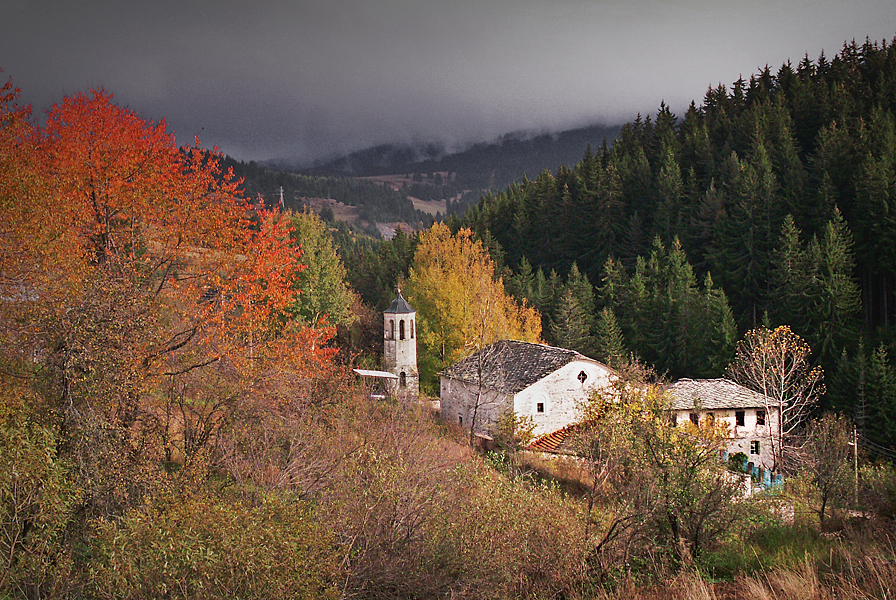 Some of the most beautiful and picturesque places in Bulgaria are located in the Rhodope Mountain. Lush meadows in unbelievable nuances of green alternate with dark coniferous forests, steep cliffs and picturesque canyons. If there is a destination, which is worth visiting by every tourist in every season of the year, then this is certainly the Rhodope mountain. The mountain spreads on a vast territory and occupies a large part of Central South Bulgaria. It is conditionally divided into Western and Eastern Rhodope.

The vegetation in the West Rhodope Mountain is preliminarily central European, and in the East part – Mediterranean and sub-Mediterranean. Forests in the mountain occupy an area of about 800,000 hectares, which is about 28% of the forests in the country. In the higher places they are preliminarily coniferous – fir tree (Abies), spruce (Picea), black pine (Pinus nigra), white pine (Pinus sylvestris), and in the lower places they are broadleaved – shaggy oak (Quercus pubescensWilld.), flowering-ash (Fraxinus ornus), juniper (J. oxycedrus L.), eastern oak (Fagus orientalis). Over 2,000 species of higher plants have been registered in the mountain. There are a lot of protected species, many herbs, and field flowers. One of the most interesting vegetation species is the Rhodope haberlea (Haberlea rhodopensis), which only grows here. A legend says that it appeared from the blood of Orpheus. Haberlea has the unique ability to return to life after it had been dried.

The favorable climate and the diverse vegetation are the reason for the great diversity of animal species. 291 bird species had been registered, as 4 of them are of global importance – royal eagle (Aquila heliaca), white falcon (Falco naumanni), landrail (Crex crex) and small cormorant (Phalacrocorax pygmeus). Many birds of prey are concentrated in the Eastern Rhodope Mountain. Here you can see Egyptian vulture (Neophron percnopterus), white-headed vulture (Gyps fulvus), etc.

According to the most famous legend, the mythical singer Orpheus was born in the Rhodope mountain. He was enchanting people and animals with his magical music. Another ancient saying tells about the Thracian king Hem and the queen Rhodope, who loved each other so much that they were calling each other with the godly names – Zeus and Hera. Gods got so angry at their insolence that they separated them and transformed them into distantly located mountains (the Balkan Mountain and the Rhodope mountain). These and other legends turned the Rhodope mountain into a place with special mysticism. The rock complex Perperikon is situated in the eastern part of the mountain. The temple of God Dionysus was situated at this exact place. It is also related to many legends. According to two of them, two prophecies which had come true had been said at the altar of this temple – one of them foretold the glory of Alexander of Macedonia as a world ruler, and the other one foretold the might of the first Roman emperor Gaius Julius Caesar Augustus.

The Rhodope mountain is one of the most preferred destinations for winter tourism – two ski resorts – Pamporovo and Chepelare – are situated here at a distance of only 10 km.

During the summer season the Rhodope mountain is an exceptionally pleasant place for hiking and biking. The natural landmark and The Wonderful Bridges are situated in close proximity to Chepelare. It had turned into one of the symbols of the mountain.

The well developed country tourism in the Rhodope mountain is a very good option for acquaintance with the local culture and cuisine. People in the region are hospitable, and when staying in some of the country houses, guests will certainly have the option to taste various Rhodope dishes, such as the renowned Patatnik, Cheverme, Smilyan Beans, etc. Some of the villages which are the most preferred by tourists are Shiroka Laka, Gela, Mogilitsa, Kovachevitsa, Leshten, Arda, Trigrad, Yagodina, Momchilovtsi, Orehovo, Smilyan and many others.

The tour of the Rhodope landmarks includes passing through the magnificent Trigrad Gorge and Buynovo Gorge. Three unique caves are located in the region of the two gorges – the Devil’s Cave, Haramyiska Cave and Yagodinska Cave, which are accessible for visits.

Besides the villages, the Rhodope towns also offer very good accommodation options. Some of the most popular Bulgarian balneological and SPA resorts – Velingrad and Devin – are also located in the Rhodope mountain. The combination of healing mineral water and the clean mountain air has been attracting people to these lands for thousands of years. A holiday in a SPA resort can be combined with cultural tourism – the museums in Smolyan, Chepelare, Batak, Zlatograd, Kardzhali preserve the history of the region and the unique local culture.

In order to get completely acquainted with the local customs and culture, you must visit the Rhodope mountain during some of the festivals and celebrations. The Rhozhen gathering has a hundred years of history. Each 4th year in August, Bulgarians from all parts of the country come below the Rhozhen peak for a gathering, where singers and performers sing and play music on a number of stages. The performance of the 100 Rhodope Bagpipes orchestra is exceptionally impressive.

According to a centuries-old tradition, every year in the beginning of August, on the Ilinden meadows by the Rhodope village of Gela local families gather and celebrate, play music, sing and dance. The tradition has been observed to the present day and it preserves the song diversity of the Rhodope mountain. The aim of the festival is to popularize the authentic Rhodope folklore.

The festival “Mysteries of Orpheus” is conducted every year in the end of July at the Trigrad Gorge. It includes demonstrations of pagan rituals of various ages.

The only ethnographic complex where you can get to know the centuries-old traditions of the local craftsmen in the Rhodope mountain is situated in Zlatograd.

The remains of multiple ancient and medieval fortresses can be seen even nowadays in the mountain. The most popular ones of them are Monyak near Kardzhali, Ustra near the town of Dzhebel, Tsepina near the village of Dorkovo, Asen’s Fortress, Monchil’s Fortress, etc.

The Dospat and Batak dams are preferred destinations for fishermen. They also offer good conditions for water sports.

The vast territory of the Rhodope mountain offers options for various experiences. The combination of natural and historical landmarks with the diverse accommodation options and the delicious local cuisine turn the Rhodope mountain into a place which, leaves a deep imprint and offers unforgettable memories.