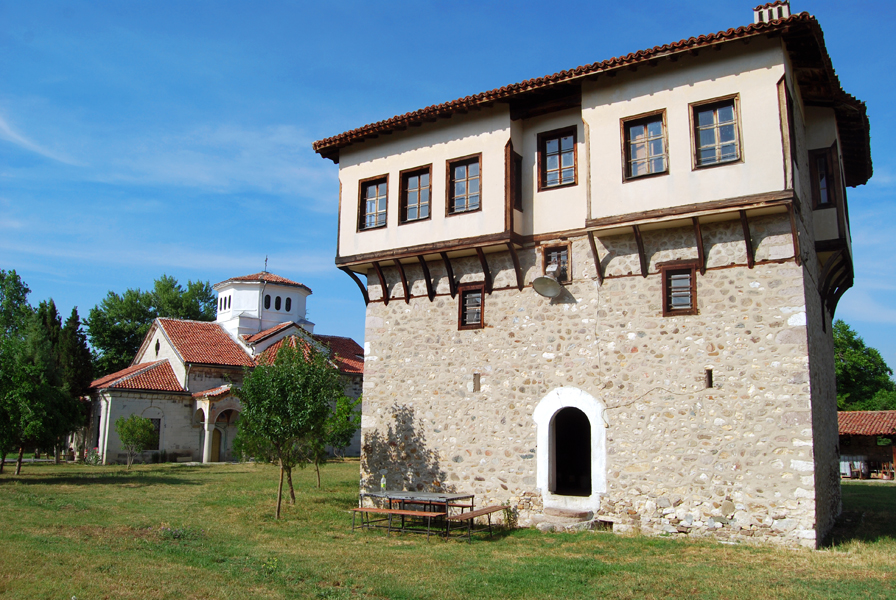 The Arapovo Monastery of Saint Nedelya is located 8 km east of Asenovgrad, on the right-hand side of the road to Parvomay.

The monastery was founded in 1856, near an ancient healing holy spring, not far away from the village of Zlatovrah (Golden Peak), Asenovgrad Region that was once called Arapovo. The Arapovo Monastery is the only monastery built during the Ottoman rule of which there is no evidence of previous existence. A school for the poor children living in the region was established in the monastery in 1868.

The monastery complex comprises several two- and three-storey dorters and farm buildings, as well as a large cross-in-square church. According to an inscription on the back door of the temple it was completed in 1859.

The wall-paintings in the temple are extremely interesting because they are the first to break away from the canon related to the way the lives of St. Cyril and St. Methodius are depicted: the two saints are portrayed as preachers and Baptists of the Bulgarian people. Similar style is used for the depiction of episodes from the lives of St. Ivan of Rila and other Bulgarian saints. An old icon of the Virgin Mary, which is believed to possess wonder-working powers, is also kept in the temple. Many people from all around the country come to the monastery precisely because of this icon.

The holy spring, which, according to local legends, has healing powers, is located near the north gate of the monastery. The building of the first chapel of the monastery that has been preserved to this day is situated next to it.

A three-storey tower stands in the yard of the monastery. According to local beliefs it was built by the legendary Angel Voivode – a brave rebel who protected the people from the Ottomans. The first two levels of the tower were built for military purposes: they are made of stone and have narrow slits. The third level is a dwelling area with four rooms.

The patron saint’s day of the monastery is celebrated on 7 July – the Day of Saint Nedelya.