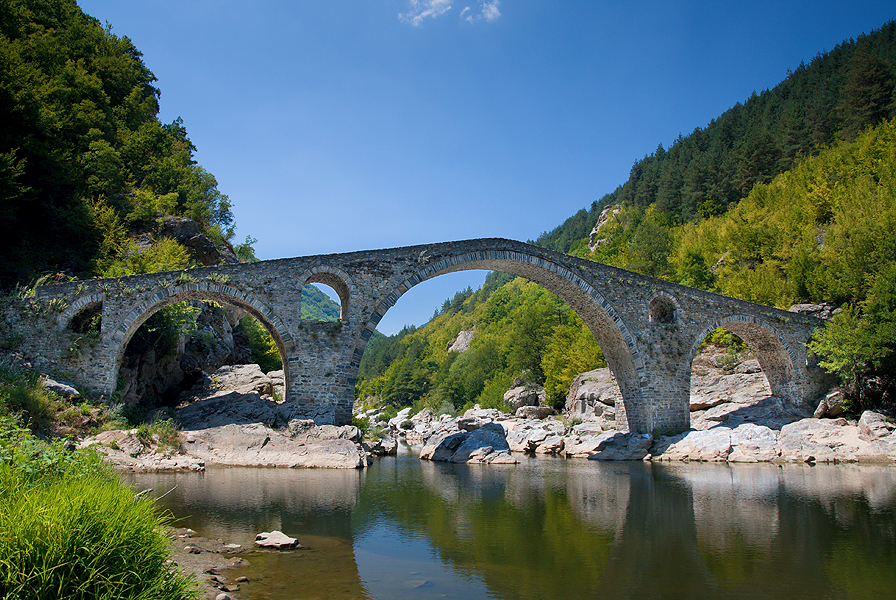 The Dyavolski Most (Devil’s Bridge), (also known as Sheytan Kyupriya) is a medieval bridge over the Arda river. It is situated in a picturesque valley about 10 kilometers northwest of the town of Ardino and 4 kilometers east of the village of Galabovo (municipality of Banite).

The bridge was built in 1515 – 1518 by the builder Dimitar from the village of Nedelino (which is a town nowadays) upon the remains of an ancient Roman bridge on the road, linking the Aegean region with Northern Thracian valley (Gornotrakiyski Nizina) through the Makaza pass.

The bridge is situated 420 meters above sea level and is surrounded on both sides by steep slopes. Its length is 56 meters, and its width is 3.5. The bridge has three vaults; it has holes with small arches in its side vaults, made for drainage. The height of the middle vault is 11.5 – 12 meters, with a stone parapet on the edge, 12 cm high.

In 1984 the bridge was declared a cultural monument. The bridge can be reached by car, passing along a rough road. Tourist infrastructure had been built near it for picnic and recreation.