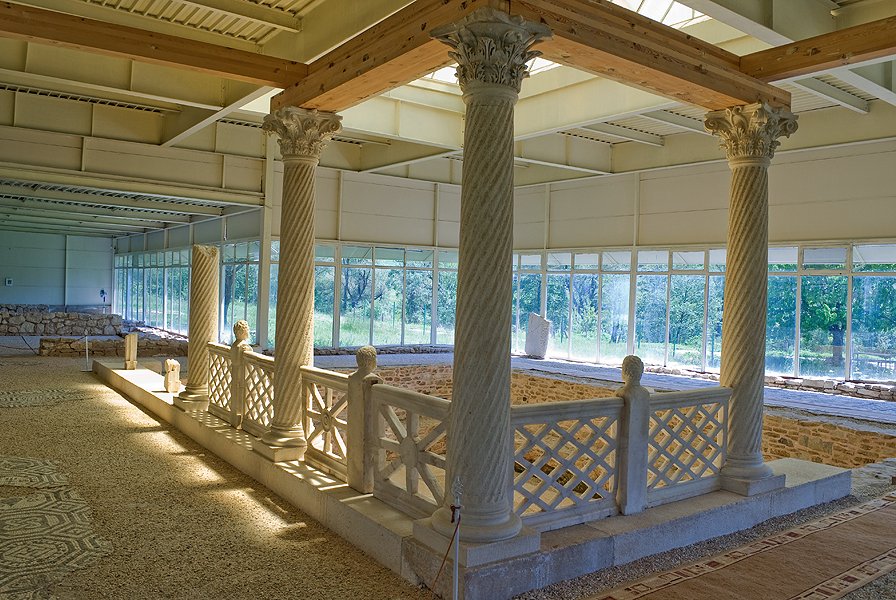 Armira Villa, one of the most interesting monuments from the time of the Roman Empire, is located in Southern Bulgaria, 4 km southwest of Ivaylovgrad.

In 1964 while building a dam, developers accidentally stumbled upon traces of an ancient building. The archaeological excavations that followed revealed the remains of a suburban villa dated from the period when the Roman Empire reigned over what is now Bulgarian territory. It was named Armira Villa after the small tributary of the River Arda whose bank the villa was built on.

The villa was luxurious, with remarkable design, magnificent marble decorations and original floor mosaics. It is one of the oldest and most precisely dated Roman villa complexes studied so far in Bulgaria and also the most luxurious private palace from the Roman period discovered on the territory of modern-day Bulgaria. It was built in the second half of the 1st century AD by a renowned Thracian aristocrat as a centre of a large estate in the valley of Armira River. An impressive 3600 sq m two-storey building with a panoramic terrace and many different rooms and premises surrounding an outdoor pool from three sides used to stand in a beautiful garden suited for walks. The first floor alone had 22 rooms.

Gradually the villa grew too small for its owners and at the beginning of the 3rd century it was extended to the east by adding a spacious guest hall – triclinium and service premises. Part of the building had a hypocaust – a Roman heating system, traces of which can still be seen today.

A studio for arts with the white marble produced in the region was founded at Armira Villa as early as the first half of the 2nd century. Masters from the town of Aphrodisias in Asia Minor, where the biggest sculpture school in the world in Roman times was set up, were invited to work in the studio. Thanks to them the villa gradually took on the brilliant and splendid look of a real Roman palace.

The entire first floor was clad with perfectly shaped marble tiles and panels. They used to cover the walls of the corridors and all the rooms accessible to guests from floor to ceiling, as well as the pool itself which was surrounded by a wall colonnade and a beautiful fence. Nearly 3000 very well preserved marble fragments were discovered during the excavations.

The quantity, the variety and the quality of the marble decoration turned Armira Villa into a one-of-a-kind monument not only in modern-day Bulgaria but on the territory of the former Roman provinces on the Balkans as well. Its wall decorations make it a unique monument of ancient architecture and art.

All rooms were floored with high-quality artistic mosaics that depicted traditional painting patterns from the Age of Antiquity. The mosaic in the master bedroom is extremely valuable. In the northern part of the room there is a portrait of the owner of the house with his two children dated as far back as the first half of the 2nd century – these are the only mosaic portraits from the Roman period found in Bulgaria to date.

The mosaic in the triclinium which was laid later (beginning of the 3rd century) is also particularly interesting. It depicts the Gorgon Medusa – a symbol that is constantly repeated in the decoration of the villa. This is the biggest and the most diverse mosaic find in Bulgaria. It is greater in quantity than all other mosaics discovered on the territory of modern-day Bulgaria.

After it had flourished for nearly 300 years, Armira Villa was burnt down and plundered during the second half of the 4thcentury. This event had to do with the massive destruction of the region around Hadrianopolis in 378 when the Roman army led by Emperor Valens (364 – 378) was defeated by the Goths.

The villa was declared an architectural monument by virtue of publication in State Gazette, issue No 67 of 1968.