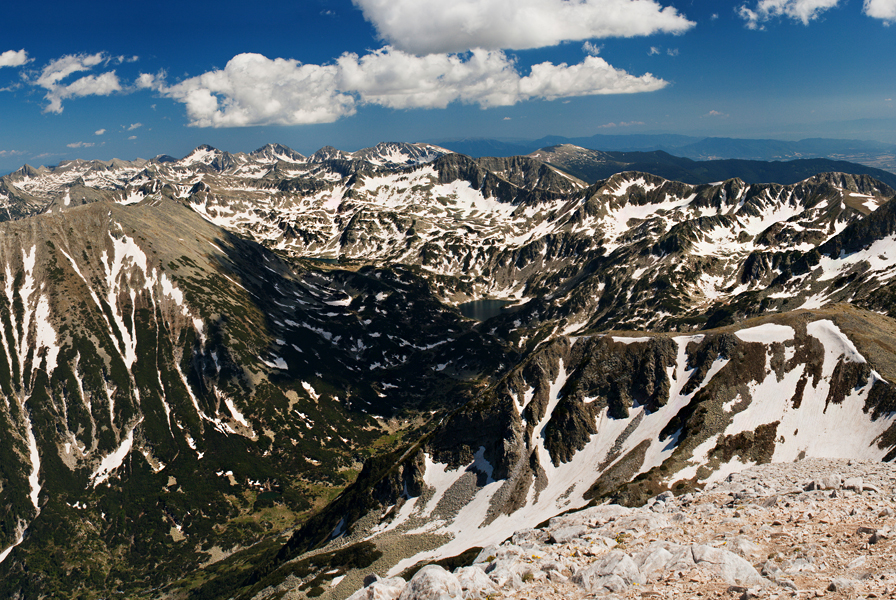 In 1962, when Pirin National Park was established, it was known as the Vihren Nature Reserve. At that time it covered 6,212 decares and comprised the highest points of the Demyanishka and Vihren regions. Over the years the territory of the park was increased many times over, and it now covers 40,000 decares. Since 1983, the park has been protected as a UNESCO Heritage Site.

The park includes one of the oldest reserves in Bulgaria – Bayuvi Dupki – Dzhindzhiritsa. The area was granted this status in 1934 so as to protect the endangered black and white fir (Pinum peuce) and the habitats of many other plants and animals. In 1977, this reserve was included by UNESCO on its list of reserves as part of the “Man and Biosphere” program, as was the park’s Yulen Reserve, in 1994.

Within the park there are more than 182 species of medicinal plants and 1,315 other plant species – roughly 1/3 of Bulgaria’s total. The park also harbors roughly 320 kinds of moss and lichen and 165 varieties of algae.

The wide variety of plant life supports many kinds of animals – more than 2,000 invertebrate species and more than 200 vertebrate species. Among them are the European tree frog (Hila arborea) and the Eastern Hermann’s tortoise (Testudo hermanni), both of which are included in The Red Book, an international list of endangered species.

Within the boundaries of the park 159 species of birds have been recorded, amounting to some 40% of all bird species in Bulgaria.

The park is divided into a number of regions: Sinanitsa, Bayuvki Dupki, Vihren, Bezbog, and Kamenitsa, part of which includes the Three Rivers region.

The international hikers’ route E4, which  goes from the Pyrennees through the Alps before crossing Bulgaria’s Rila Pirin ranges and ending in the Peloponnese, traverses the park’s Bayuvi Dupki reserve. The part of the route in Pirin National Park– goes from the Predel Shelter to the Yavorov Shelter and the Vihren Shelter, then to Tevno Lake, the Pirin Shelter ands on to the Popov Grasslands. Another trail begins in the city of Razlog at the Betolovo Base and proceeds to the Yavorov Shelter and along the Suhondol Ridge to Kresna. There is a park information center in Razlog, in the city’s Museum of History.

The Vihren region of the park is most closely associated with the city of Bansko. At 2,914 meters, Vihren Peak is the highest point in the Pirin Mountains, second only to Musala in the Rila Range. The peak is included among Buolgaria’s prime tourist destinations, and a stamp confirming ascent of the peak may be obtained at the Vihren Shelter. It is in this region of the park where Bulgaria’s onldest tree grows – the Baykusheva Fir, which is more than 1,300 years old. This region of the park is served by a tourist information office located in Bansko.

In the Bezbog Region of the park is found the Yulken Reserve, notable for Polezhan Peak and the Polezhan circus of lakes. The office for this region is locate in Dobrinishte.

Located throughout the park are 8 larger shelters and 4 hikers’ huts.

The park’s main information center in Bansko houses an interactive exhibit on the park’s forests with 22 modules, allowing visitors to acquaint themselves with interesting facts about the park’s trees, animals, and vegetation. There is also a 30-seat projection room that is equipped with multimedia equipment and a large screen, where visitors may choose from 150 entertaining and informative films about the park’s plants and animals, Pirin Park in general, and other nature reserves in Bulgaria. The center also offers lectures prepared by staff experts. The center also offers a range of classes for both younger visitors and adults, held in the park’s outdoor “classroom”, as part of the center’s program “Nature’s Lessons Are Best Learned First-Hand.”

The Pirin Nature Park is an extremely important national resource and visitors should take great care to preserve its beauty by not littering. Hunting is strictly prohibited, as is fishing in many of the park’s rivers. Logging is also forbidden, as is tampering with the park’s signs and trail markers.