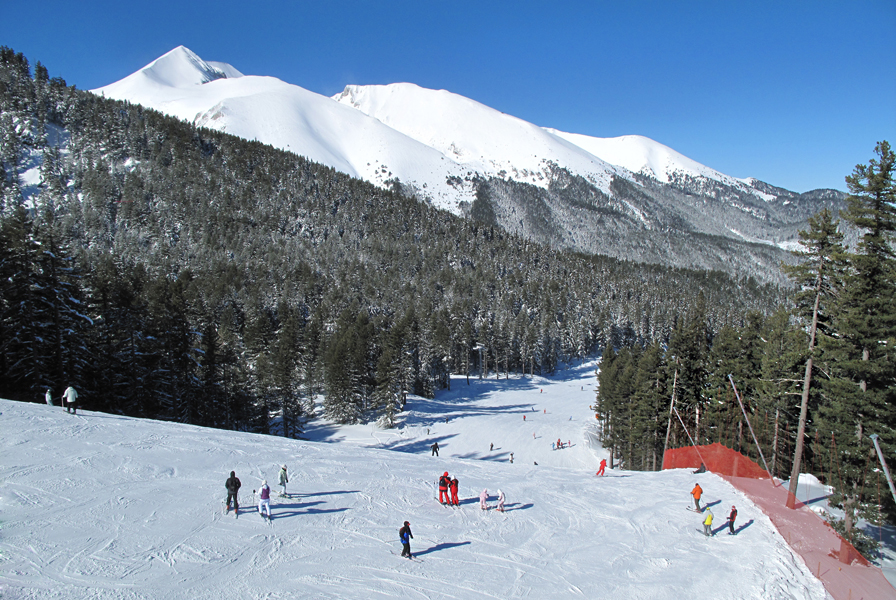 One of the largest winter resorts of Bulgaria is situated on 925 meters above the sea level at the foot of the Pirin mountain– at a distance of 150 km from Sofia and 96 km from Blagoevgrad. Over the years, Bansko gradually established itself as one of the leading winter ski resorts in the country and the region, which attracts many Bulgarian and foreign tourists.

Without a doubt, Bansko is famous among tourists basically as a skiing and a snowboarding destination. The total length of the ski tracks is 75 km, as the longest of them is 16 km long. About 90% of all 16 tracks are equipped with canons for artificial snow for high-quality and long-lasting snow cover. There is also a track equipped with lights for night skiing in the region. An open-air ice skating ring works in the town during the winter season. The highest point of the ski center is 2560. The greatest challenge for the skiers in Bansko is the track Tomba, named after the Italian skier Alberto Tomba. A cabin lift is available for the tourists. It takes them from the starting point of the ski lift station in the town of Bansko to Banderishka Polyana. The town is connected with the ski zone and with a 7 km long ski road.

There are multiple museums and landmarks in the town. 130 architectural and historical monuments of culture are registered, seven of which are of national significance.

The Museum House of Nikola Vaptsarov was established in 1952 and it laid the beginning of the museum activity in the town. The life of the poet Nikola Vaptsarov (1909 – 1942) is presented in the museum, from his childhood to his death. An Art Center functions in it, where permanent and temporary exhibitions are organized, as well as scientific forums, meetings with cultural figures, etc. A permanent ethnographic exposition and bazaar is exhibited on the second floor. It presents authentic handmade materials, art souvenirs and works of art.

The architecture of the typical houses in Bansko from the period of Revival (18th – 19th century) can be seen in the rest of the museum complex on the territory of the town. The Velyanova house is one of the best models of the Revival architecture. It was built in the 18th century, and nowadays it is declared a monument of culture with national significance and a model of the architectural type of reinforced house. The unique wall paintings and fretworks on the ceilings are made by the artist Velyan Ognev.

The Benina House, in which the Museum House of Neofit Rilski is housed, is also impressive with its architecture.

An exhibition of icons of the Bansko icon-painting school was exposed in 1986 in the old convent, situated opposite to the monument of Paisiy Hilendarski. A special place is provided for the school founder – Toma Vishanov, his son Dimitar, and his grandson Simeon, and other icon-painters from Bansko.

The church “St. Trinity” is a basilica with a nave and two aisles, built in 1835 by local builders. It was the largest one in Bulgaria, before the construction of the monumental temple “Alexander Nevski”.

In the intellectual and historical center “St. Paisiy Hilendarski” the guests can see an exact restoration of the cell of Paisiy Hilendarski (1722 – 1773) in the Hilendarski Monastery, where he wrote Istoriya Slavyanobalgarska (Slav-Bulgarian History). Infrastructure for people with special needs is provided in the center.

The basic tourist landmarks in Bansko are situated next to one another, which facilitates their visiting.

The locality of Sveti Nikola is situated in the south-east part of National Park Pirin, between Bansko and Dobrinishte. A small chapel was restored on this place from its foundations in 2003. Archaeological excavations are conducted in the region. Remains of fortified walls and residential buildings were found during these works.

Bansko falls into the territory of the National Park Pirin, which makes it an appropriate place for winter, as well as summer tourism. Since 1983 the park had fallen under the protection of UNESCO. The town is a starting point for tourist routes to the following huts: Banderitsa, near which is situated the Baykusheva Mura (a white fir) (the oldest tree in Bulgaria – more than 1300 years old), Demyanitsa, Vihren, as well as the shelter of Tevno lake, etc. There are multiple protected sites in the park. The routes with varying levels of difficulty are available for people of all ages. You can learn more for the park and the tourism options it offers in the Visitors Information Center of the National Park Pirin, which is situated in the town of Bansko.

The Bansko region is famous for its mineral waters, which turns the resort into an attractive SPA destination. Many of the large hotels in the town have swimming pools and contemporary SPA centers, which offer a large number of wellness procedures.

During the summer season the roads and the ski tracks can also be used as routes for mountain cycling. The resort is also popular among tourists during the summer season, because of the various types of activities and sports that can be practiced there – mountain climbing, horse riding, mountain passages, rafting in the region of Kresnensko defile, etc.

Very typical for Bansko are the traditional taverns, in which dishes from the region of Bansko are served. Among the town specialties are: Kapama, Chomlek, Bansko Kebap, Sache, Banski Starets, etc.

One of the most modern golf courses in the country functions in the region of Bansko. It offers excellent conditions for playing gold, combined with beautiful nature and clean air.

The town of Bansko is a host of an annual jazz festival. It is conducted on the central square in the month of August. The admission for the concerts is free. During the festival the town livens up by the thousands of guests and admirers of jazz music.

The places for accommodation in Bansko are more than diverse and there are options for every preference and budget – from luxurious 5-star complexes to guest houses and apartment hotels.

The towns of Razlog and Dobrinishte also are situated near Bansko. They are also popular among the tourist destinations. The town of Belitsa is situated at a distance of 20 km north from Bansko. There is a park for adaptation of dancing bears in close proximity to it.