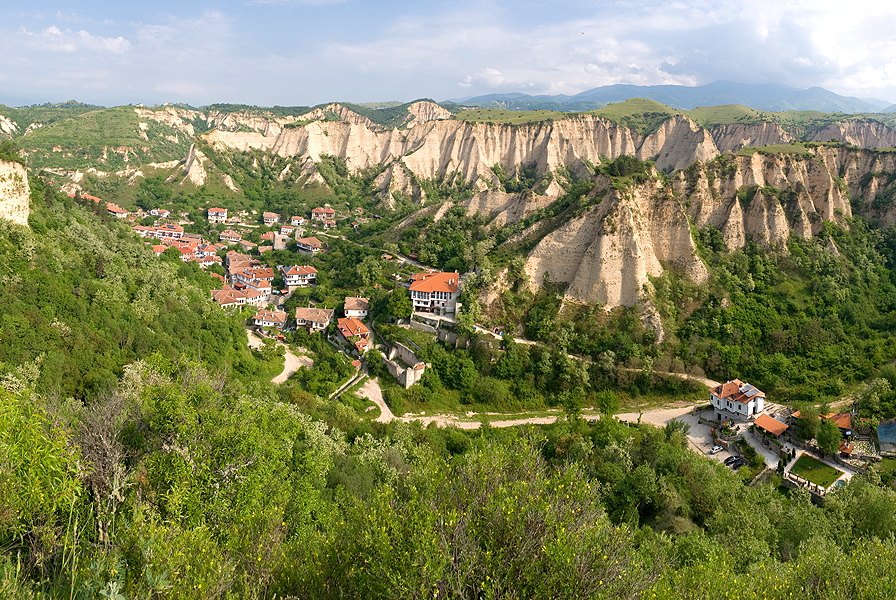 The smallest town in Bulgaria (208 residents), Melnik, is nested in the south slopes of Pirin, among sand pyramids with queer forms. It is situated in the Sandanski Municipality, Blagoevgrad county, 175 km north from Sofia, and it is only 30 km from the borderline with Greece. The finds from the antiquity discovered upon the archaeological diggings testify for its centuries-old history.

The first written evidences for the Melnik Fortress refer to the beginning of the 11th century. The first settlers on the territory of contemporary Melnik were the Thracians, and more particularly the Thracian tribe Maedi, of which the legendary rebel Spartacus originated. A few centuries later the Romans lived on this ground. This proves the ancient Roman bridge, which is still preserved in the town of Melnik. The Slavs, who were consequently residing on this territory, had called their settlement Melnik, because of the surrounding sand pyramids. The name comes from the Slavonic word “mel”, which means white clay, crayon.

In 1215 Melnik turned into a capital of an independent feudal principality, ruled by Despot Alexius Slav. The ruins of his fortress are preserved to the present days, near the town.

In 1395 the Bulgarian lands, as well as Melnik, fell under Ottoman Dominion for whole 5 centuries. Melnik remained within the borders of the Ottoman Empire until 1912.

During the 18th century, in the age of the Bulgarian Revival, the town was raised for new life. Melnik turned into a blooming, significant in size and population town, with a large market. The local tradespeople were selling their goods in Budapest, Wien, Genoa, Venice. Melnik also became famous in entire Europe for its good wine, with which it is famous even nowadays.

As a center of the ecclesiastic life in the region was recognized the Rozhen Monastery, which is situated 5 km east from Melnik. It is the largest Orthodox monastery in the Pirin region. The monastery is comparatively well preserved to the present day and every year it is visited by many tourists from various countries. The monastery holiday is on 8 September, when people from the whole region gather in order to participate in the celebrations.

During the Ottoman Dominion, Melnik was a large administrative center. In the town there was a Turkish cantonment, which was performing its administrative functions in the so called Turkish town hall – the police station at that time. This building is preserved to the present day. It is situated in the center of the town of Melnik opposite to the town library.

The most vivid architectural monuments which testify for the economic upsurge of the town at that time are also from the age of Revival. One of the oldest houses on the Balkan Peninsula is the Boyar’s House (declared an architectural monument in Issue 32 of the State Gazette of 1965), which was a residence of Despot Alexius Slav. In the middle of the 13th century a part of it was set on fire and destroyed, and during the following centuries it was restored and reconstructed. In the end of the 17th century it was demolished in some of its sections, but in the beginning of the 18th century it was subjected to overall reconstruction, related to construction of an attic floor and a clock tower, which existed until the beginning of the 20th century. The site can be examined only on the outside, because reconstruction activities are being conducted inside it.

Other two houses which are architectural monuments of the Revival are the Kordopulova House and the Pashova House.

The Kordopulova House (declared an architecture and construction, art and history monument in Issue 25 of the State Gazette of 1998) is the largest building from the Bulgarian National Revival in our country. It was built in 1754 and it was owned by the rich Melnik family Kordopulovi, which were involved in wine producing. The cellars, excavated under and behind the house, with their constant temperature and ventilation, were used for preparing and growing the renowned Melnik wine.

The Pashova House (declared an architecture and construction monument in Issue 25 of the State Gazette of 1998) was built in 1815. The house can be examined only on the outside due to restoration activities.

From the once renowned town with population of 7-8 thousand citizens, with about 1300 residential buildings, today Melnik is the smallest town in Bulgaria with about 208 residents.

Another sightseeing is the remains of the Metropolitan’s church “St. Nikola” near the town of Melnik, in the central part of the hill St. Nikola. Only the west wall is preserved and a few elements of the interior of the church.

The church (basilica) St. Antonius (declared an art and architecture and construction monument of culture in Issue 52 of the State Gazette of 1977) is situated in the north-east part of the town. It is a part of the cultural and historical reservation “Melnik”. It was built in 1765.

The Monastery “St. Virgin Mary Spileotisa” is situated in the east part of the St. Nikola hill, to the south of the town of Melnik. It is one of the valuable cultural and historical monuments of the town. The monastery was built on a hard to reach place in the beginning of the 13th century by order of Despot Alexius Slav. Nowadays the monastery is partly active.

The remains of the church “St. Varvara” are situated in the north-east part of the town of Melnik beneath the Kordopulova house. Nowadays at the place of the ruins one can see a vague shape of the past majesty and beauty of the temple.

Another interesting temple is the Metropolitan’s Church “St. Nikolas the Wonderworker” (declared an architecture and construction and an art monument of culture by Protocol No 14/09.11.1998), which is situated in the south-east part of Melnik, near the center of the town. It was built in the 13th century. Nowadays it is one of the few active churches in the town.

It is also worth visiting the churches “St. Peter and St. Paul” (declared an architecture and construction and an art monument of culture by Protocol No 14/09.11.1998) and “St. John the Baptist”.

The Melnik pyramids are situated near the town, and they are declared a natural landmark by Decree No 156 of 11.04.1978. They are a unique natural formation which attracts tourists from the whole world. It is considered that the present look of the pyramids has been caused by erosion of the clay soil. The Melnik pyramids are in a process of shaping and their appearance and shape are changing with time. Besides the pyramid form, the sand formations have the shape of mushrooms, cones, needles, etc. The height of the pyramids reaches 100 m. It is typical of the Melnik pyramids that the inclinations are sandy, in some places they are completely vertical, and broad-leaved plants and grass grow on their tops.

Melnik is declared a natural and architectural reservation, and it attracts thousands of tourists annually. The wine which is produced by the unique Bulgarian brand Wide Melnik Vine has a wonderful quality, scents of ripe cherry, herbs, and in the presence of an oak it develops nuances of tobacco and leather. It is one of the attractions of the town and the region, and it attracts many admirers from the whole world. You can sample it in some of the wineries and cellars in the town and around it. The combination of good wine and wonderful local cuisine turns Melnik into an excellent destination for gourmet and wine tourism, which also offers the quests many interesting landmarks. The possibilities for accommodation are various – from luxurious hotels to cozy guest houses.