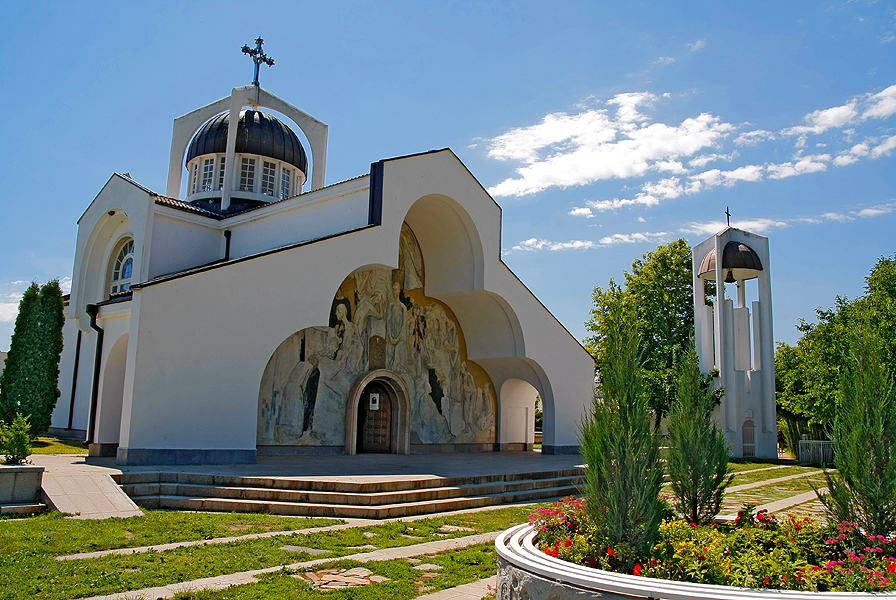 The Memorial Temple “St. Petka of Bulgaria” is situated in the village of Rupite, 10 km northeast of the town of Petrich. The church was built in close proximity to the temple in which the prophet Vanga lived (1911 – 1996). The temple was established on its memorial day on 14 October 1994, and it was built by monetary means provided by Vanga.

The wall paintings and the icons are made by the great Bulgarian artist Svetlin Rusev, who was a close acquaintance of Vanga; the fretworks were made by Grigor Paunov. The church is a part of a large complex, situated on an area of 200 dca.

The temple provokes great attention because of its location, architecture, and its unusual artistic decorations, in which the canons of icon-painting have not been followed completely. Very interestingly it is also visited because of its relation with Grandmother Vanga. Despite the fact that the temple was not built according to the rules of the Orthodox church, it attracts thousands of worshippers and tourists.

The prophet is famous to all Bulgarians and also known in many other countries of the world. She was considered a phenomenon and she was asked for advice and prophesies by thousands of people. Her real name was Vangeliya Gushterova. According to a legend, when she was young, Vanga lost her sight in a storm. Then she had her first vision, which set the beginning of her phenomenal abilities. During her life, Vanga made thousands of prophecies which had come true for global and local events, for personal fates, for natural disasters and wars.

She spent the last years of her life in a small house in the locality of Rupite. According to her relatives, Vanga was feeling that the mystic locality was giving her powers and energy.