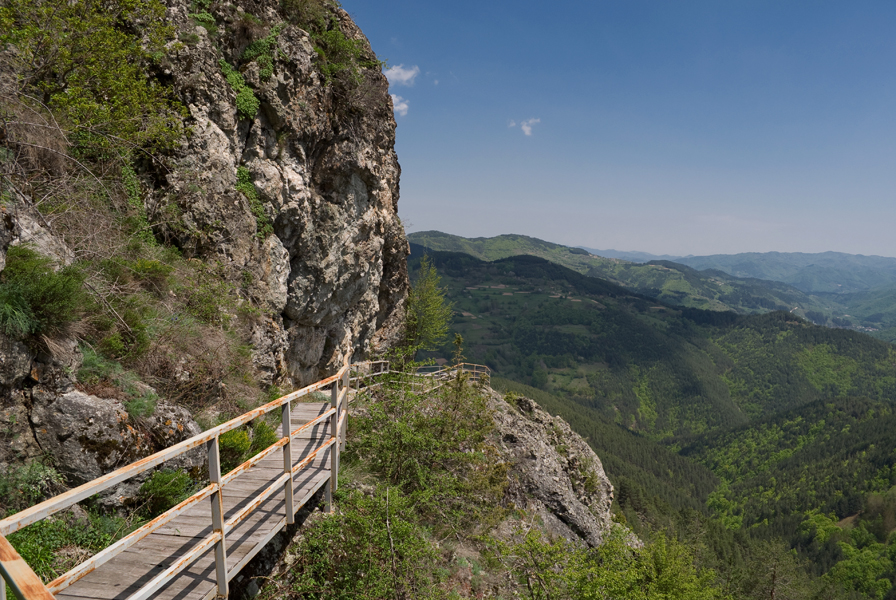 The fortress was built during the reign of Emperor Justinian I (who ruled in the period 527-565). He launched massive military construction projects on the territory of the entire Balkan Peninsula and built several fortified lines: around Constantinople, the capital city, in the Rhodopes, in Stara planina (Old Mountain), and along the Danube River. The fortification facility was successor to a Thracian rock sanctuary from the end of the 5th millennium BC. It lies in the highest spot on the territory of the fortress and offers a view of Golyam Perelik Peak (2191 m), Snezhanka Tower (Snow White Tower) in Pamporovo, Rozhen National Astronomical Observatory, and Svoboda Peak (Freedom Peak – 1943 m). From this spot one can also see the rock pinnacles where the other two fortresses that were part of the defence line of Emperor Justinian I against the Barbarian raids from the north are situated. These are Kaleto Fortress (Stronghold) in Turluka Area, north of Smolyan, and Koznik Fortress, south of Rudozem.

The fortress existed for a relatively short period of time. It was burnt down by the Slavs and was reconstructed around the 11th century. In 1343 it fell under the control of Rhodope ruler Momchil. Back then it was called Podvis. It functioned as a fortification facility until the invasion of the Ottomans at the end of the 14th century. At that time it was burnt down again and was never reconstructed.

The independent Rhodope ruler Momchil, whom the fortress is named after today, was of Bulgarian origin. In the first half of the 14th century he got involved in the intestine wars for the Byzantine throne. Empress Ana of Savoy gave him the title of despot. He was declared a sebastokrator by Emperor John Kantakouzenos and was given the control over Podvis Fortress and St. Irene Fortress. He later conquered Xanthi Fortress and made it his residence. He led the resistance against the Ottoman invaders himself and won the battle of Abdera (located in modern-day Greece). He was killed on 7 July 1345 in a battle with the Ottomans at Peritor Fortress on the shore of White Sea.

Momchil Hero is glorified as a fighter against the Ottomans in Bulgarian, Serbian, and Herzegovian epic folklore.

The first research in the Rhodope Mountains was carried out in the end of the 19th century. It was then that Momchilova Fortress stirred up interest. In 1966 it was declared an archaeological monument of culture of national importance. The archaeological research of the fortress began in 1986.

The valuable artefacts discovered during the archaeological research are exhibited in Stoyu Shishkov Regional Museum of History in Smolyan.

There is an Information Centre on the second floor of the Village Town Hall in Gradat Village. It is open all year round.