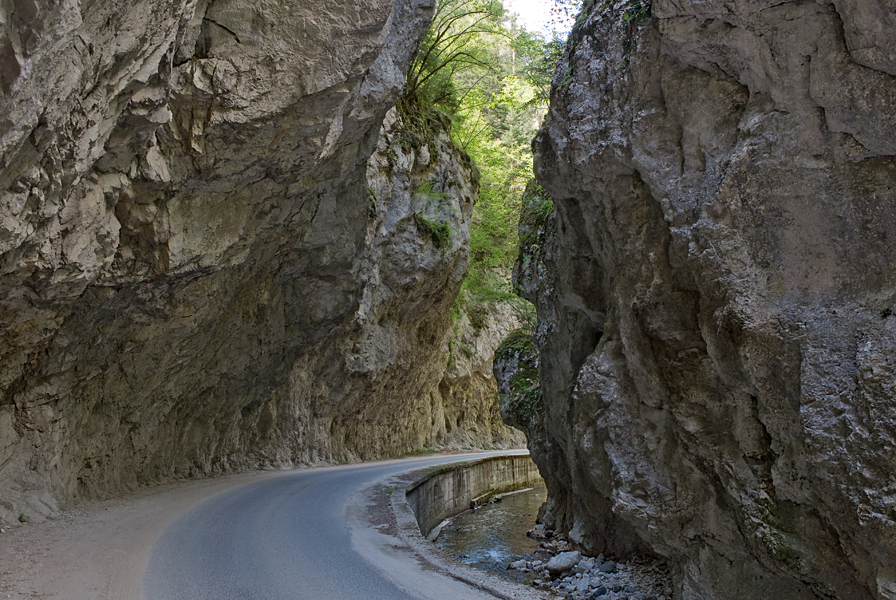 The Buinovo Gorge is the longest gorge in Bulgaria. It is located between the villages of Yagodina and Teshel. Formed by erosion as the Buinovo River flows through layers of marble rock, the canyon developed into an impressive natural phenomenon. The cliffs on both sides of the canyon rise hundreds of meters. The narrowest gap between the cliffs is called “The Wolfs’ Leap” – local residents say that during winter wolves would leap the chasm to attack the sheepfolds. While this is only a legend, it is plain to see that the gorge is so narrow at this point that the cliffs practically touch.

The limestone sediment has been eroded throughout the entire region; in the vicinity of the village Yagodina alone there are 36 caves, the most famous of which is The Yagodina Cave. It is the longest cave in the Rhodope Mountains at 8,051 meters, of which roughly 1½ kilometers is open to tourists. Near The Yagodina is the beautiful Sanchov Cave, with its many sinter lakes filled with cave pearls. However, tourists can only visit this cave with proper equipment and accompanied by a guide.

Besides caves, the river has carved other interesting formations in the marble cliff. Not far from The Yagodina Cave there is a natural bridge, and close to the bridge is the beautiful Praskolo waterfall.
The Buinovo Gorge can be visited on foot, by car on a paved road that winds along the base of the cliffs. It is a one-lane road with traffic in both directions, not suitable for oversized vehicles or impatient drivers.

The beauty of the Buinovo Gorge can be appreciated from “a bird’s-eye view,” thanks to the creative ideas of the local tourist association. They have constructed what they call The Eagle’s Eye, a metal platform built on the precipitous cliff face of the Saint Iliya Peak at a height of 1,563 meters, with impressive views of the entire surround area. During good weather, the entire Rhodope Range and even parts of Greece are visible, and individual peaks can be identified.

Several hiking trails have been built in the region. The Buinovo Gorge was designated as a nature reserve in 1971, and is one of Bulgaria’s 100 national tourist sites. There are many rare and endangered species in the area, such as the rosette perennial Haberlea rhodopensis, a plant renowned for its ability to survive for years even during drought on just a few drops of water. Running parallel to the Buinovo Gorge is the equally impressive Trigrad Gorge, only a few kilometers from its larger
neighbor, which boasts its own fair share of caves, legends, rock formations, awe-inspiring natural beauty, and hospitable village accommodations.