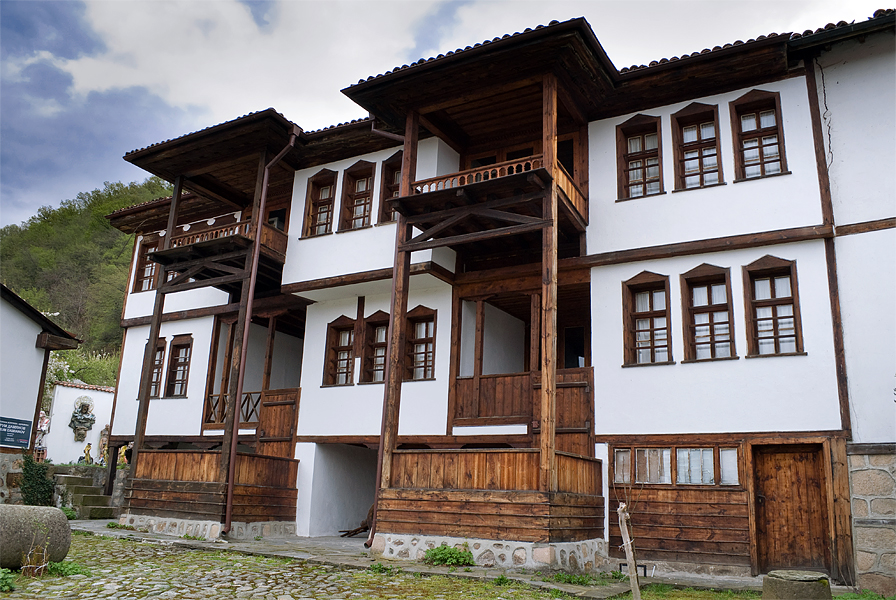 Bratsigovo is a small city in southern Bulgaria, set in a grassy expanse in the Rhodope Mountains. It is 140 km from Sofia and 45 km from Plovdiv.

The city historical museum in Bratsigovo was opened in 1926, to display the local school’s collection of historical materials. In the ensuing years, the collection grew considerably, and in 1988 a new site that was found to house it, which became the current museum location.

The museum follows the history of the region and its people, and its centerpiece are the preparations and events of the April Uprising of 1876 against Ottoman rule. Here is displayed the only original cherrywood cannon in Bulgaria. Among the displays are original rifles, yatagani (Turkish scimitars), pistols, the revolutionaries’ banners, and needlework of the local Ana Gizdova.

In 2009, a picture gallery was opened on the third floor of the museum, displaying the skill of a number of Bulgarian artists.

The museum includes the house of Vasil Petleshkov (1845-1876), the Bulgarian revolutionary who led the April Uprising in the city. This residence-museum opened its doors in 1976, to commemorate the hundredth anniversary of the uprising. The exhibition displays Petleshkov’s personal effects, and photographs document his role as a member of the local revolutionary committee.

More about the lives and daily customs of the region’s people can be gleaned from the ethnographic exhibit in the Kanev House. On its first floor are photographs and authentic tools used by the local inhabitants to cultivate roses, since a large percentage of the land in Bratsitovo was once devoted to the production of rose oil. There are also examples of the equipment originally used for local handicrafts – distaffs, spindles, looms for rug weaving, and so forth. Also on display are breadstuffs and musical instruments such as gudulkas, gaydas, and other instruments.

In 1981, another exposition was opened at the Popov House, Architecture and Construction in Bratsigovo during the Bulgarian Renaissance. Architecture and building developed in the city during the 18th century after the resettlement there of some 150 families from Kosturka in Macedonia who brought with them their special building skills. On display are photographs depicting the lives of master builders, contractors, journeymen, and apprentices. There are also examples of their tools and specimens of their craft. Visitors may view the chronicles (minutes) of the local masons’ guild, along with an admirable building master’s glossary containing over 700 terms describing the most important practices and technical aspects related to their closely-guarded trade secrets.

The exposition also includes models of the most important churches that these masters constructed. They were regularly commissioned to construct public buildings, schools, and residential ensembles in Plovdiv’s Old, Sofia, Karlovo, Elhovo, Pazardzhik, Bratsigovo, and elsewhere.

To visit the Vasil Petleshkov residence-museum, the Kanev House, and the Bratsigovo school of architecture exhibition, visitors must first contact the Bratsigovo Historical Museum. The three exhibits don’t have regular opening hours, but members of the museum staff are always ready to open these sites for interested tourists.