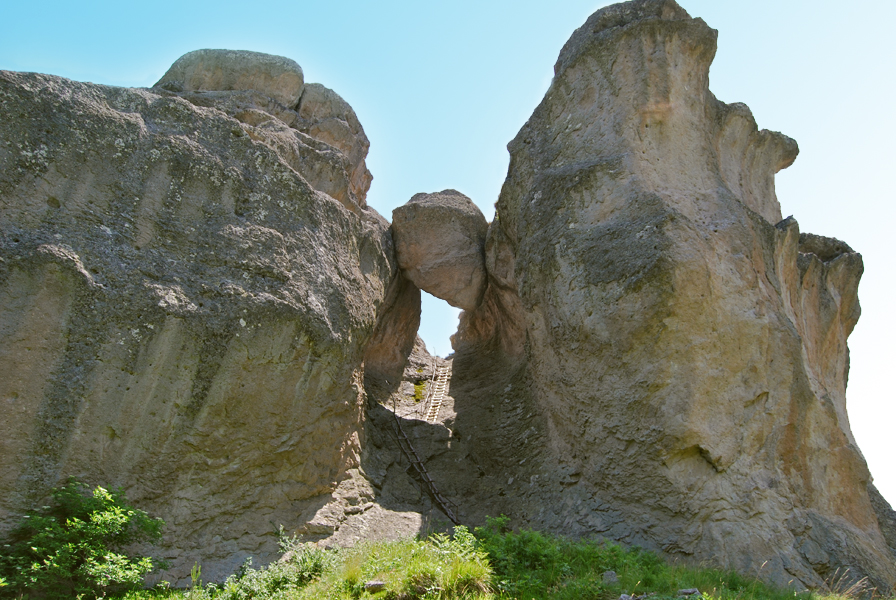 The Karadzhov Boulder is a remarkable rock formation located near the village of Mostovo in the Rhodope Mountains. The formation is two stone pillars that rise to plateaus with a peak that is 1,448 meters high, and with walls so steep and narrow that they form a deep fissure. In this fissure rests a giant stone, testimony to the massive forces needed to wedge it there. This stone is called The Karadzhov Boulder. The phenomenon was officially declared a natural landmark in Decree № 1015 on August 6, 2003.

From ancient times, this stone has been seen as something extraordinary – the ancient Thracians erected a sanctuary at the site to honor their dead. There are still circular declivities in the stone that had religious importance when they were hollowed out, and there is a stone stairway leading to the upper part of the massif. Archeological excavations have determined that the sanctuary dates to the early Iron Age (7th-6th century BCE). The deep stone pits and furrows from this period held votive vessels containing a flame, and the ritual was probably concluded by covering them with stones.

It has also been determined that the site was used later, during the 3rd-4th centuries (CE), since earthen vessels thrown on a potter’s wheel have been found there along with coins from the time of Emperor Justinian I (reign 527-565).

As is often the case with Thracian sanctuaries, this site is divided into levels. The first level is known as the Lower Cultic Terrace, where stone stairs have been carved leading to the upper part. There holes have been incised in the stone, and when a Thracian died, those close to him or her would fill the holes with offerings.

Local residents, unlike the ancient Thracians, do not consider the site sacred, but instead associate it with revolutionaries in the area who opposed Turkish rule. There is a small cave under the Karadzhov Boulder, where according to legend an activist leader known as Karadzha would hide with his men to avenge themselves on the Ottomans. That is how the stone got its present name.

But whatever the history or legends attached to it, the Karadzhov Boulder is above all an amazing natural phenomenon, set in the beautiful surroundings of the Kormishov Nature Reserve.  The ascent to the upper part of the cliff is aided by a metal parapet and wooden stairs that pass directly beneath the stone. The last few steps were carved by the Thracians, but many visitors don’t notice them since they have been effaced by the wind, and there are many other sights to catch the attention. The ascent is very steep and requires caution, but the view from the top is incredible, revealing many Rhodope scenic spots below – such as Belintash, Krastova Gora, and the Martsiganitsa Shelter nestled in its pristine setting. The descent from the plateau is also by way of the parapet, since in the other direction lies a sheer rock face.

Since the only access to the site is by a hiking trail, and since the area is a protected nature reserve, the natural beauty there remains intact. The trail follows a ridge that affords beautiful panoramas on both sides.

A total of seven Thracian sanctuaries have been discovered in a relatively small area near the village of Mostovo, the most famous of which is Belintash. The location is also important in the region’s Orthodox Christian history, since a site considered holy by believers, Krastov Peak (The Peak of the Cross, also known as Krastova Gora or The Forest of the Cross), is nearby. This was also the location of a Thracian sanctuary. Not far from Krastov Peak is Freedom Peak (also known as Momchil Yunak, 1,943 meters high). It is the site of an Islamic sanctuary, Elihan Baba Teke, thought to be the gravesite of Enihan’s (Alevi’s) grandmother.