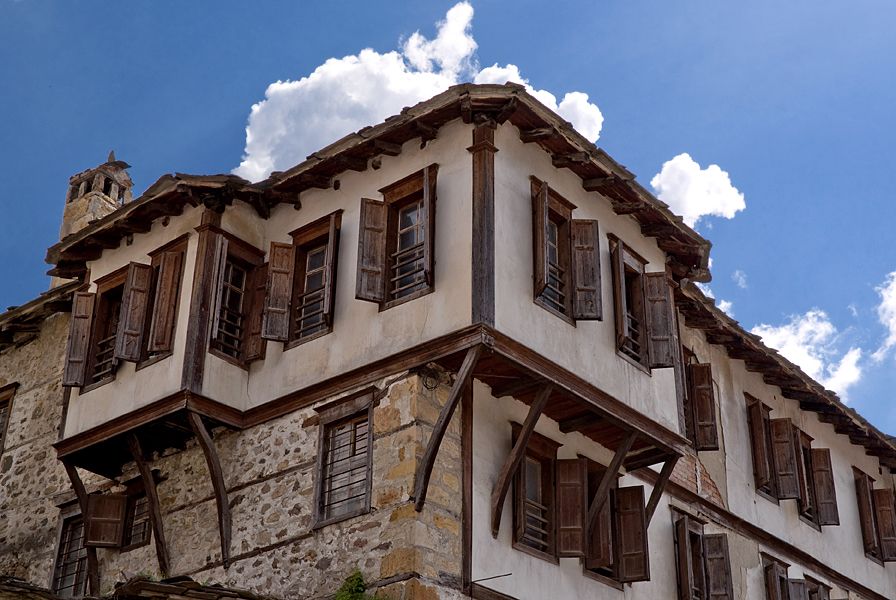 The Cheshite Quarter is the oldest residential area in Smolyan’s Raykovo neighborhood. There are particularly interesting houses there that were built sometime after 1835. The ground level of a typical house in the quarter has an outer courtyard surrounded by stone walls that enclosed livestock and were also used for stacking firewood. A stairway leads from the courtyard to the floors above. The stairway is almost always covered, and there is almost always a window on the upper floor overlooking the floor below. This architectural feature was demanded by the small, narrow lots on which the houses were built.

A much larger lot serves as the site for two adjacent houses separated by a wall that lacks common access. These houses are both relatively ornate and of monumental size, allowing the artisans and traders who lived in them to display their wealth.

The Cheshite Quarter double houses were built at the end of the 19th century by an unknown master builder, are of stone and wood, and were owned by the brothers Georgi and Todor Cheshite, both successful weavers.

Another interesting house in the quarter is the Milyon Cheshite House, an example of a wealthy merchant’s single-family dwelling.

The Gyordzheva House was built in 1873, to accommodate a family of artisans and their livestock. Its first owner was Raycho Gyordzhev, whose profession was crafting woolen goods. On the ground level there is a small dying shed and a shop with its own access to the street. In 1984, this house became part of The Smolyan Museum of History Complex, and includes an exhibit dedicated to the Hungarian poet and translator Laszlo Nagi.

Also of interest in the architectural complex is the Cheshite spring, built in 1870. Residents claim its waters have curative powers. At first the spring was covered, but over time the source was capped with a pipe, surrounded by thick walls, and fitted with a wooden roof. It is in the shape of a shallow well with an arched entrance and a very large niche.

The Smolyan Museum of History offers guided tours of the Cheshite Quarter.