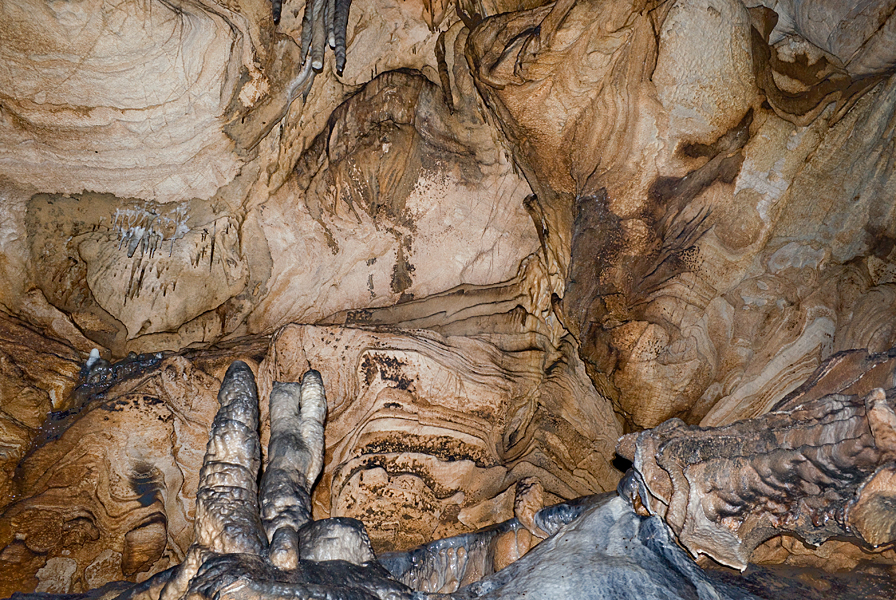 Lepenitsa Cave is situated in the Western Rhodope, below Syutkya Peak (2186 m), 10 km southwest of Rakitovo and 11 km south of Velingrad.

It is 1525 m long, lies at 975 m above mean sea level and has a vertical drop of 10 m. The cave can be approached both from Rakitovo and Velingrad.

Lepenitsa Cave has three levels. The lower level is 273 m long and an underground river flows through it. When it rains four lakes are formed on the second level, while in dry weather there are only two. The third level is dry but inaccessible.

The cave is extremely beautiful and has a rich collection of stalagmites, stalactites and columns. Impressive cave pearls were discovered in it. They are now displayed at the Museum of Natural History in Sofia.

In order to explore Lepenitsa and the other neighbouring caves, in 1930 the inhabitants of Rakitovo founded the first branch of the Bulgarian Speleological Society-Sofia. Even before that, in 1925 and 1927, during his visits to the cave, Acad. Ivan Buresh (1885 – 1980) carried out biospeleological research in his capacity as Head of the Royal Museums of Natural History.

The cave fauna is very rich and interesting. So far 24 animal species are known to inhabit the cave, 6 of which are classified as troglobites (living only in caves).

6 types of bat dwell in Lepenitsa Cave. The temperature in the cave is around 10° C.

After it has been closed for visitors for more than 50 years, the cave is currently a tourist site. It was declared a tourist landmark in 1960. Tourists can enter the cave only accompanied by a guide and wearing special equipment in groups of not more than 10 people.

Inside cave visitors are only allowed to follow strictly defined routes. Smoking, drinking, and the use of opiates are prohibited in the cave. Touching and breaking the cave formations is also not allowed.