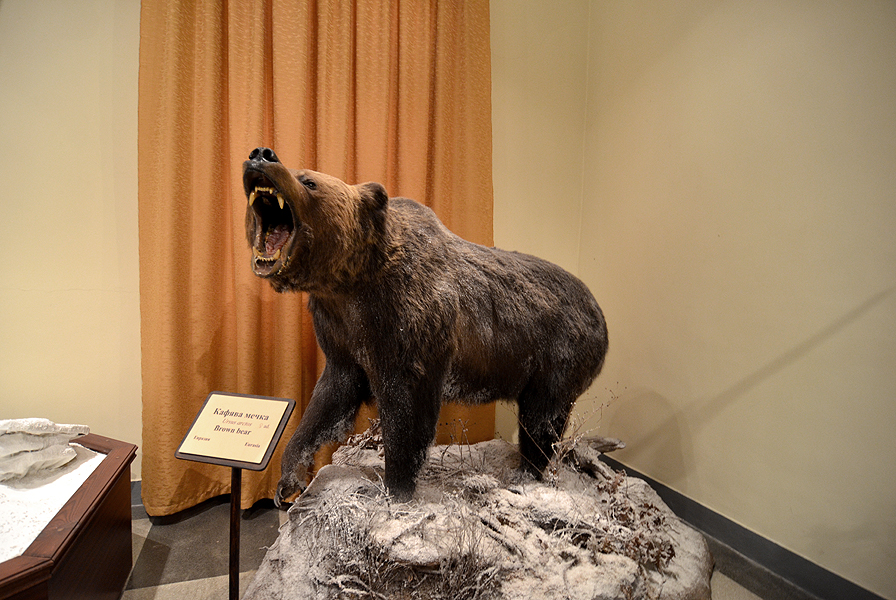 The National Museum of Natural History was established in 1889. It is the oldest museum in Bulgaria and is placed among the natural science museums with the richest exposition on the Balkan Peninsula.

Initially, the personal collection of butterflies, birds and mammals of Prince Ferdinand (a Bulgarian monarch who was later proclaimed a tsar; ruling in the period 1887 – 1918). Later, in 1907, the first museum exposition was established. It was made by its first curator – the German ornithologist Paul Leverkun (who lived and worked in Bulgaria in the period1892 – 1905).
The museum has been situated in its present building since 1936. During the bombing in the Second World War the building was harmed but the exponents were saved, and since 1948 the museum had been receiving visitors again.

At present the expositions are placed in 16 halls on the four museum floors. Some of the most valuable exponents are the Caroline parrot (Conuropsis Carolinensis), which has extinct in the beginning of the 20th century, moonstones, etc.

An exposition dedicated to minerals is placed on both sides of the central foyer. More than 1300 specimens are presented on the right. Among them are native elements such as platinum metals, gold, silver, newly found mineral articles from Bulgaria, etc. Another hall, dedicated to mineralogy is placed in the other hall. The process of formation of the minerals is presented there. The hall for temporary museum expositions is situated between two halls. Exhibitions and collections of Bulgarian and foreign museums are placed in the hall.

Birds, amphibians, fish, fossils, etc. subjected to taxidermy are presented in five halls on the second floor. Here visitors can see almost all representatives of the contemporary bird species in Bulgaria as well as in the whole world. Among themost interesting exponents are Spheniscus demersus, Phalacrocorax pygmeus, Aegypius monachus, Anthropoides paradisea, etc. Some of the rarest species from Australia, North and South America, Asia and Africa are Apteryx owenii, Lophura diardi, Cacatua sulphurea, etc.

A large part of the Bulgarian and foreign amphibian species are presented in glass vessels. Various fish species, inhabiting the Bulgarian sweat-water basins, can be seen in the hall entitled “Fish”. An individual window in the hall is dedicated to fish, typical for the Black Sea. Fish from Mediterranean and Red sea are also presented. The following species are some of the rarest: Tetraodon inervis and Diodon hystrix, Astyanax jordani, Malapterurus electricus and many others.

An exposition entitled “Paleontology” is situated on the second floor, where visitors can see the largest ammonite ever found in Bulgaria. It was found in 1932 in the Shumen Plateau and it is believed that its age is 84 million years, and its diameter is 1.44 m.

The entire third floor of the museum is dedicated to mammals. The two-meter high bear from Rila standing on its hind legs is interesting to see. It won a gold medal for being the biggest European bear at an International Hunting Exhibition in Berlin in 1937, and the medal is placed on its chest. A brown bear, a tiger in its natural environment, a cheetah, antelopes and other animals are also presented.

The exposition dedicated to insects is placed on the fourth floor. They are arranged according to a systematic principle in 20 windows. The windows presenting butterflies and beetles are especially interesting to the visitors. Species of all medicinal plants growing in Bulgaria and a collection of mussels and other marine inhabitants are presented in the other two halls on the last floor.