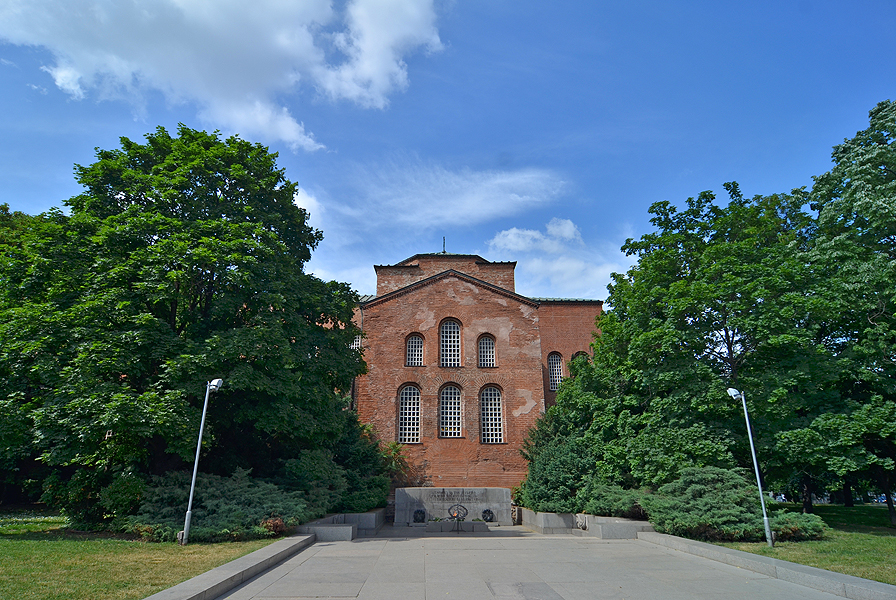 The church “St. Sofia” (God’s Wisdom) is situated in the center of Bulgaria’s capital, in close proximity to the Monumental Temple “Alexander Nevski”. It is one of the oldest churches in Sofia and its history is closely related to the history of the city. Nowadays the temple is considered one of the symbols of Sofia.

The church was built in the 6th century during the time of the Byzantine Emperor Justinian (reigned 527 – 565) on the foundations of 4 older Christian temples from the 4th century.

The church “St. Sofia” was built on the place of the necropolis of the city of Serdika (the old name of Sofia) and other older churches from the 4th century and dozens of masonry tombs. Fragments of the mosaic of one of the older temples were found during archaeological excavations. It is considered that the building can house up to 5 thousand people.

In the 16th century during the Ottoman Dominion the temple was reconstructed into a mosque, and its wall paintings were destroyed. According to a legend, in the 16th century the goldsmith Georgi was burned alive in front of it, because he refused to convert into Islam. The great earthquakes in 1818 and 1858 demolished the minaret and destroyed the building, and according to a legend during the second earthquake the two sons of the imam were in the building and died. The Muslims considered that a bad omen and deserted the temple. It was deserted for a long time, but after the Liberation (1878) it was turned into a warehouse.

The building was renovated a number of times, and since the beginning of the 20th century archaeological excavations have been conducted here. Currently the appearance of the temple is as close as possible to its authentic look from the late antiquity and the early Middle Ages. The revolutionary Vasil Levski (1837 – 1873) was hung in close proximity to the temple. Behind the church lies the grave of the great Bulgarian writer Ivan Vazov (1850 – 1921).

Presently, the Monument of an Unknown Warrior is situated next to the temple. It is a symbol of admiration to all Bulgarian warriors who died for their motherland.