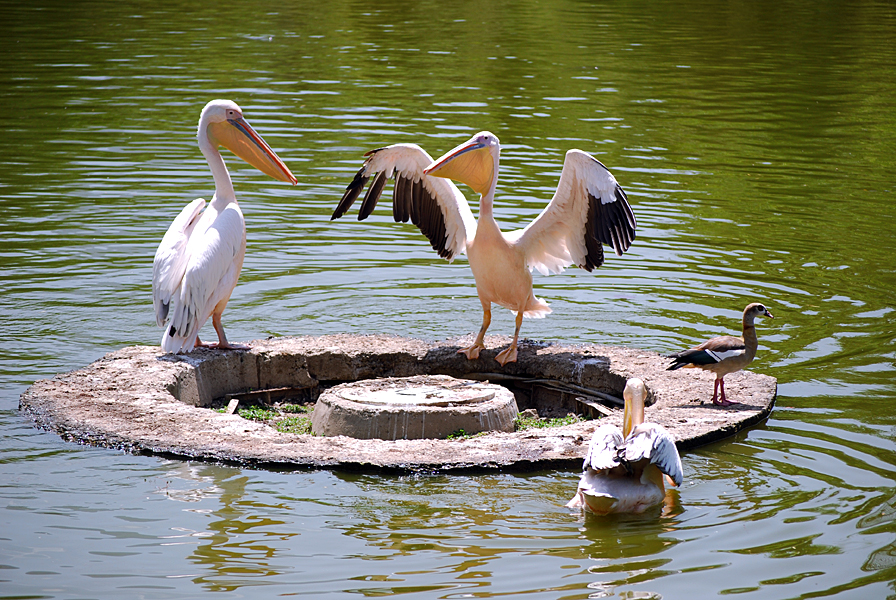 One of the attractions in Sofia is the Zoo. It is the oldest and largest Zoo on the Balkan Peninsula. It covers an area of more than 360 decares and was established in 1888 by Prince Ferdinand, and initially it was situated near the former royal palace. The first animal in the zoo was a Cinereous Vulture (Aegypius monachus). In 1892 the first two lions were brought to the zoo.

Over the years the zoo quickly became popular and became a place for recreation, entertainment and education, with its worldwide renowned specialists and the breeding of valuable and rare animal species.

The zoo is one the 100 National Tourist Sites.

It is divided into several sections – herbivores, primates, carnivores, birds, aquarium and terrarium.

The Primate sector is divided into two pavilions – one for the smaller and one for the larger species. Here visitors can see 12 monkey species – the largest one is the group of the Hamadryas baboon (Papio hamadryas). The Gray langurs (Semnopithecus entellus) are in the cage next to them. The group of the pigtail macaque (Macaca nemestrina) is the greatest attraction for the visitors of the zoo. Other valuable species are the Ring–tailed lemur (Lemur catta), the Yellow baboon (Papio cynocephalus), the Geoffroy marmoset (Gallitrix jacchus, G. Geoffroyi), Pigmy marmoset (Callithrix pygmaea), Macaque (Macaca) etc.

There are three sub sectors in the predator area – Big cats, Bears and Small predators. The brown bear (Ursus arctos), the lion (Panthera leo), and the tiger (Panthera tigris) are representatives of the sectors.

About 560 birds of 60 bird species live in the bird sector of the zoo. They can be seen by the visitors in their cages in the building of the pheasant farm, in the waterfowl lake and in the large aviary for the birds of prey. There they live and successfully have bred a couple of Golden eagles (Aquila chrysaetos) and Griffon Vultures (Gyps fulvus), as well as Egyptian Vultures (Neophron percnopterus) and Long-legged buzzard (Buteo rufinus). In the pheasant farm of the zoo one can many pheasant species (Phasianus), domestic chickens (Gallus gallus), Indian pea fowls (Pavo cristatus), Flamingos (Phoenicopterus ruber roseus) and other beautiful birds. Nocturnal birds of prey live there too, such as Eurasian Eagle – owls (Bubo bubo), Barn owls (Tyto alba), Earless owls (Strix) and Long-eared owls (Asio otus). The most exotic, colorful and noisy inhabitants of the pheasant farm are the parrots (Psittacidae). Some of them are rare and endangered, such as the Blue-and-yellow Macaw (Ara ararauna). The zoo is also home to the African grey parrots (Psittacus erithacus erithacus), the Patagonian conures (Cyanoliseus patagonus), Afro–Asian Ringnecked parakeets (Psittacula), Cockatoo (Cacatua), Cockatiel (Nymphicus hollandicus) and Rosella (Platycercus).
A couple of the largest birds on the planet live in a separate cage – the Ostriches (Struthio camelus).

The terrarium in Sofia zoo is home to reptiles, amphibians and rodents. It houses 12 snake species, 3 frog species, 3 dragon lizard and lizard species. Quite attractive is the rare blue-tongue lizard. Interesting for the collectors are the royal snakes. Only one of the snake species is poisonous – the western blue-nosed African snake.

The aquarium is one of the most attractive sectors. It shows over 80 fish species. The tropical fishes from Asia, Africa, and South America are of great interest for the visitors of the zoo. Here visitors can also see the unique Dipnoi fish, which is a rare kind. The most interesting for the young visitors is the clownfish (Amphiprion ocellaris) in the sea aquarium, which is a reef, with real living corals.

There are board signs, placed for the convenience of the tourists, telling interesting information about the exhibited species.

The Zoo of Sofia is engaged in environmental activities by participating actively in national and international programs for rare and endangered species breeding.