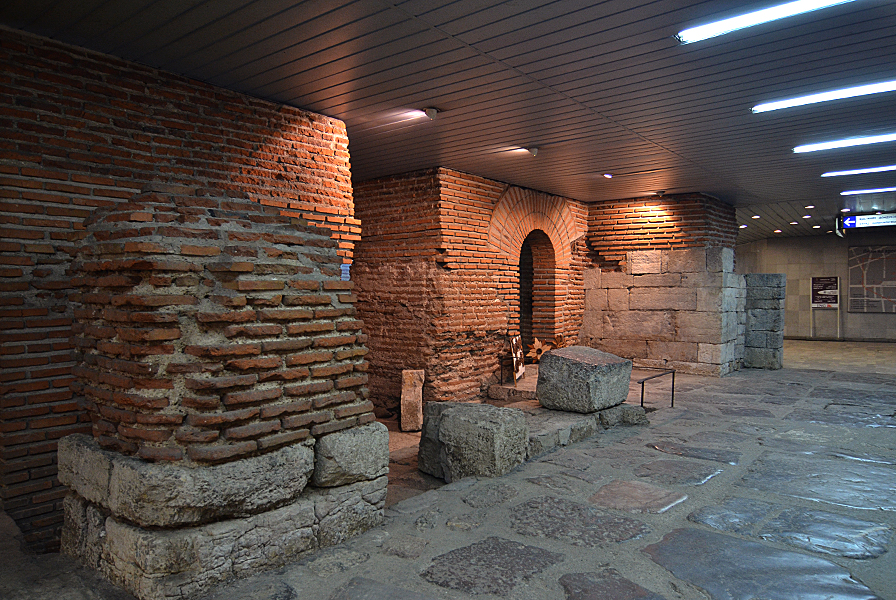 The remains of the ancient fortress Serdika are presented in the underpass between the Presidency and the Council of Ministers in Sofia City. The eastern gate of the fortress had been renovated and exposed within the period 1997 – 1999.

The town of Serdika or Serdnopolis was founded 2,000 years BC by the Thracian tribe Serdi, who settled in the region around the hot mineral springs. In the 1st century AD the town was conquered by the Romans, who appreciated the important and strategic location and the mineral springs. During the reign of emperor Mark Ulpius Trayan (98 – 117), in his honor the town was called Ulpia Serdika and was turned into a center of the administrative area.

Serdika was the favorite town of the Roman emperor Konstantin the Great (306 – 337), who loved to say “Serdika is my Rome”. Namely Serdika was the place where the decision to move the capital of the East Roman Empire in Constantinople was taken, and until its construction Konstantin reigned from Serdika.

During the ruling of the emperors Mark Aurelius and Commodus around 175, Serdika was protected by a fortified wall with four gates with observation towers, looking at the four directions of the world. A second external fortified wall was constructed in the 5th – 6th century.

The paved main streets were leading to the city forum, which was situated under the present square Sveta Nedelya. Luxurious villas with sewerage, water-mains and paved streets were located in the region of Serdika subway station. The buildings of the Roman administration were situated in the southwest part of the fortress. During the archaeological excavations around the west gate, remains of residential buildings and public buildings, ceramics and other artifacts were found.

The central historical body of Sofia, which covers ancient Serdika and the medieval Sredets, was declared a historical and archaeological reservation by issue 47 of the State Gazette of 1976.