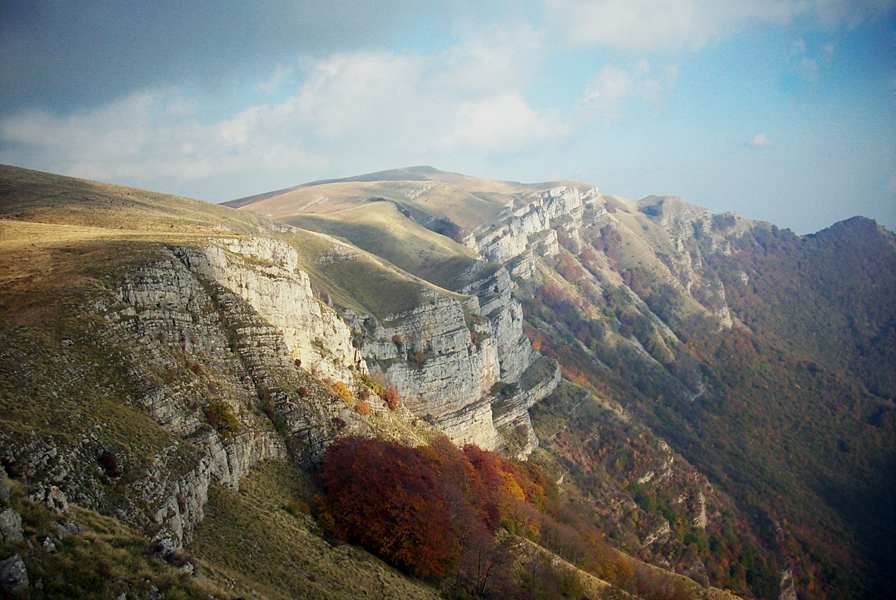 The Vratsa Balkan Nature Reserve was declared a national park in 1989, and then designated a nature reserve by Decree № 987 on November 13, 2003. The park covers extensive territory in northeastern Bulgaria, including almost the entirety of the Vratsa region of the Balkan Mountain Range (The Stara Planina).

The reserve extends over 28,344 hectares, and offers a rich variety of animal and plant species. Some 57 species of plant life protected in the park are listed in Bulgaria’s Red Book (a list of all endangered and extinct forms of life within the country’s borders). Of these, 8 are considered particularly endangered, such as scaly heather (Asplenium lepidum C. Presl) and long-leaved hare’s ear (Bupleurum longifolium)

The park contains belts of oak and beech that harbor 180 bird species, 157 of which are protected under the Biodiversity Act. Black storks (Ciconia nigra) nest in the park, as do the rock eagle (Aquila chrysaetos), the green woodpecker (Picus viridis), and others. Mammals in the park include deer, wild cats, badgers, otters, black polecats, and other species.

During the months of May and June, there are more than 170 waterfalls in the park, and 17 are active during the entire year. The

Skaklya Falls, some 10 km north of the city Svoge, are the highest seasonal falls in Bulgaria at 141 meters. This waterfall has been declared a natural landmark by Decree №  3794 оn October 11,1965 and is listed in the Bulgarian Register of Protected Areas and Regions. Another interesting waterfall is Pine Rock Falls, which derives its name from a black pine nearby. This waterfall has a height of 63 meters and is located near the village of Zgorigrad.

Also within the park are the Vratsa Cliffs, sheer karst cliffs some 400 meters high – the highest cliffs on the Balkan Peninsula. Here are remains of the Medieval Vratitsa (or Vratsa) Fortress, dating from the 10th-12th centuries. There are guardrails to aid hikers scaling the cliffs. The road that passes through the Vratsa Pass leads to the Ledenika Cave. On the sheer rock faces of the cliffs there are some 140 routes for rock climbers, of varying difficulty.

With its diverse topography, proximity to the city of Vratsa, and numerous populated areas, the Vratsa Balkan Nature Reserve is a favorite destination for ecological and alpine tourism. Near the village of Lyutibrod are the Ritlite (Cart Rails), four rock walls aligned one after the other. Local residents named the formations, since they bear a strange resemblance to giant ox cart; because of their jagged shape they also look like the walls of a ruined fortress.

Near the Ritlite (Cart Rails) is the Rashov Ravine, a place of historical importance associated with the 1876 April Uprising against the Ottoman rulers.

In the upper part of the field a sheep pen from the period has been preserved, since it was here that the battle was joined. There is a chapel in the field, and lower there is a memorial plaque honoring those who died during the uprising.

The Lakatnishki Cliffs are another protected area in the park, and also offer many routes for climbers. These cliffs are on the left side of the Iskar River, not far from the Dark Hole Cave and Razhishka Cave.

Four km from the village of Osenovlag is the Holy Mother of God Monastery, also known as the Seven Thrones, probably founded during the Second Bulgarian Kingdom (1185-1393). According to legend, the monastery was founded by seven lords or seven brothers. The monastery church has seven different altars – the only church in Bulgaria that exhibits such architecture. The monastery offers accommodations.

Another monastery in the Vratsa’s Bistrets quarter is Saint Ivan of the Desert, also known as the Bistrets Monastery.

On the heights of Okolchitsa (1048), which have also been set aside as a nature reserve, there is a stone cross honoring the revolutionary Hristo Botev (1848-1876), and his role in the 1786 April Uprising. Every year on June 2, the day Botev was killed, a memorial service is held in his honor at the foot of the monument. Botev was executed 2 km from Okolchitsa Peak, at Yolkovitsa.

There are 16 tourist routes in the Vratsa Balkans Nature Park, traversing a variety of landscapes and natural landmarks. Of these 8 are developed, with informative signs explaining the nature of each route: “The World of Ecology”; “Mountains for Beginners”; “A Fairytale Forest Trail”; Insurrection Gorge – Skaklya Falls – Vratsa; “Karst and Biological Diversity”; “The Forest – Where Life Is Welcome”; “In the Footsteps of Botev’s Revolutionaries”; and “Ancient and Medieval Vratsa”. The park also offers three routes for cyclists, of varying difficulty.

For information about the marked tourist routes, bicycle routes, guides, village settlements, and accommodations, visitors may contact The Natura Nature Center. Besides useful information, the center offers guided tours of the park and often hosts exhibits. The center organizes courses and seminars, including instruction in horseback riding. Also available are air excursions, ultra-light flights, and other activities.