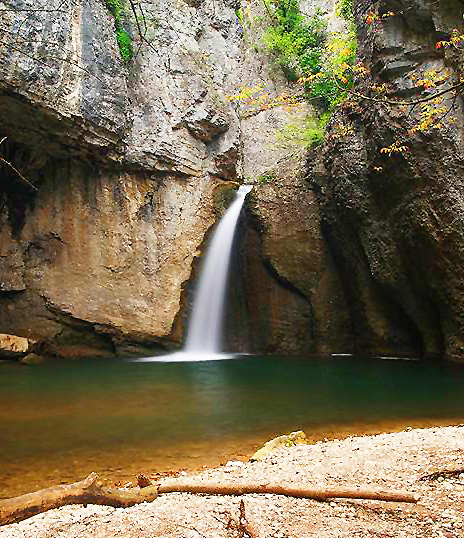 The village of Emen is located in the picturesque foothills of the Balkans, 20 km from Veliko Tarnovo, near the Emen canyon of the river Negovanka.

Legend has it that the beautiful Neda and her friends lost their lives in order to escape being abducted in the harem of the Turkish bay from the neighboring village of Musina. When the Turkish troops went to the village of Emen to pick up the girls, they ran to the rocks above a large pool. They untied their beautiful long hair, braided it together, and threw themselves into the deep pool.

Touched by the fate of the unfortunate girls, the people called the place of their death Momin Vir, and the waterfall Momin Skok.

The Emen canyon of the Negovanka river is very picturesque and fittingly immortalized in their name.

There begins the first Bulgarian eco-trail – the Negovan eco-trail, which winds along 50-meter cliffs. At its start is the Emenska Cave with a length of 3113 m and is one of the deepest caves in Bulgaria. Historicaly it was used to grow mushrooms and later store cheese.

The eco-trail continues along the river and reaches Momin Vir the waterfall Momin Skok.