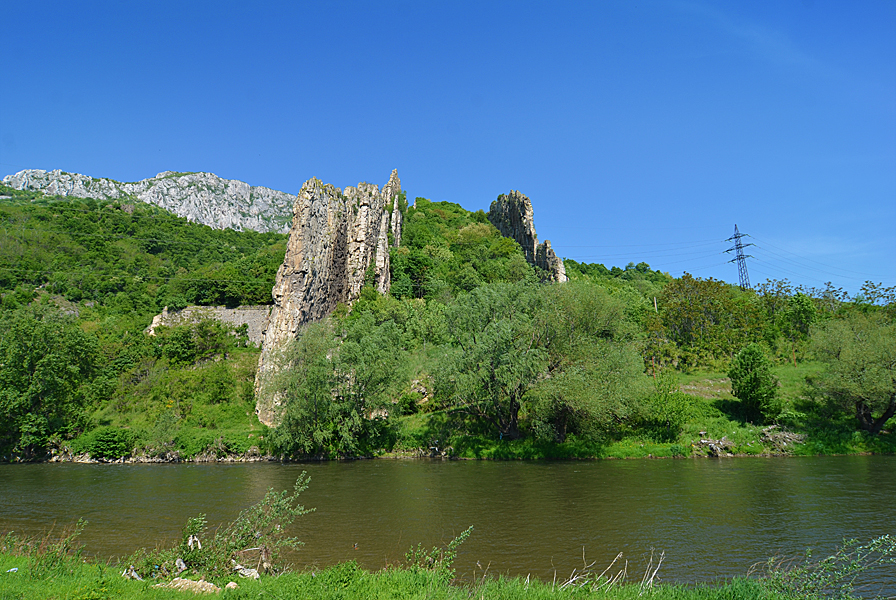 Ritlite is a natural landmark, situated on an area of 123 ha on the left bank of the Iskar river above the village of Lyutibrod. It consists of four almost parallel upright walls, 200 meters long, and a railway line passes beneath them.

They are included in the register of preserved territories and protected areas of Bulgaria by Order No 9733 of 27 May 1938 and fall within the territory of “Vrachanski Balkan” Natural Park.

The name of the natural landmark comes from their similarity with the side barriers of an ox cart (ritli).

Remains of old fortified walls are visible along the peaks. The settlement of Korintgrad, called Koritengrad by the locals, was situated east from the rocks. Remains of more than nine medieval Bulgarian churches have been found in the region.Among them is an early Christian basilica from the 5th – 6th century. The most preserved one is the church “St. George”, dating back to the 10th – 12th century. Koritengrad has not existed since the 17th century, when a part of its residents, who moved to various directions, founded the present village of Lyutibrod.

The historical landmark of Rashov Dol is situated by the Ritlite. The last organized battle of a part of the Botev Detachment after the death of the voivode in the April Uprising (1876) was conducted in this locality. The cattle-pen by which the battle was conducted is preserved in the upper part of the meadow. There is a small chapel nearby, and a memorial stone is placed downhill. A restoration of the last battles of the detachment is conducted every year on 3 June in Rashov Dol.

The village of Lyutibrod is situated in close proximity to Ritlite, 10 km from Mezdra and 16 km from Vratsa, on 320 meters altitude. The Cherepishki Monastery “The Assumption of Holy Mary” is situated at a distance of 2 km south from the village. The monastery was established during the ruling of Tsar Ivan Shishman (1371 – 1393). It was demolished a number of times and constructed anew. Another monastery – the Osenovlashki Monastery “St. Mary” – is situated at a distance of 28 km from Lyutibrod. It is also known as the “Seven Altars”.

There are a number of marked tourist routes in the region. One of them is from Okolchitsa Hut to the village of Lyutibrod and passes along the steps of the Botev Detachment after his death. Tourists can find more information about other marked routes, guides, accommodation places from the Natural Protection Center “Nature”, which is situated in the town of Vratsa.