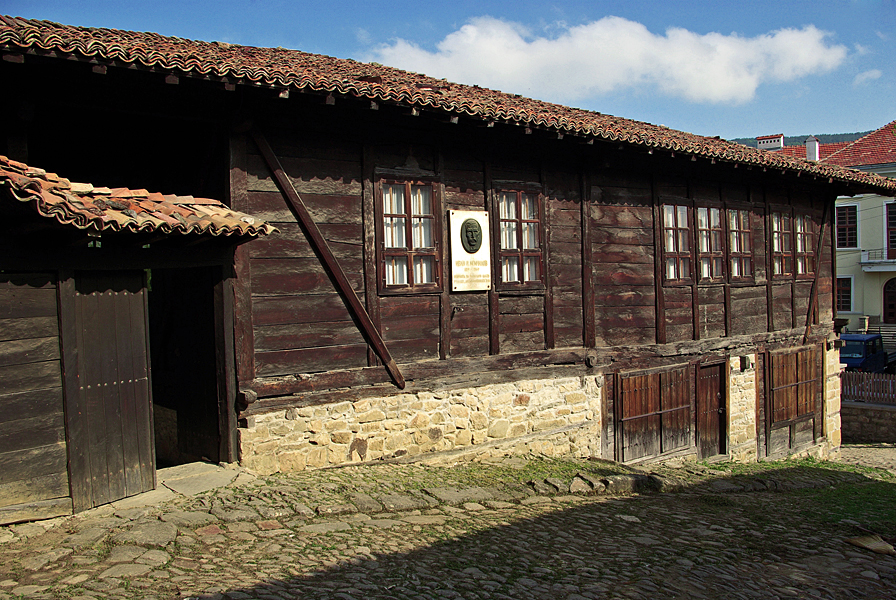 The first modern school in Bulgaria was opened in the town of Elena in 1844. The school, which is now a cultural monument, was housed in a specially constructed building – one of the earliest public buildings in Elena.

Architectural Complex Daskalolivnitsata is located in downtown Elena.
The school building, St. Nicholas Church and Kamburov Inn form a part of the building complex.  Another church – Assumption of Mary Church – stands in the courtyard of this historic site.
The complex is part of the 100 national tourist sites in the country.

The initiative to build a school in Elena was launched by Ivan Momchilov, an activist from the period of the National Revival, educated in Athens and Russia, who introduced some modern teaching methods. One of the classes he introduced – physical education – caused him a lot of trouble. In the middle of the 19th century in the Ottoman Empire physical education was considered an element of military training and so the , Momchilov, was called upon by the Ottoman authorities to explain his undertaking.

All the residents of Elena contributed with fund and labour to the construction of the school building. The poet P.R. Slaveykov, who was one of the alumni of the school, gave it the romantic name “Daskalolivnitsata” (literally ”The Teacher-moulder”)- a place where s are moulded, much like candles are moulded in a chandlery. And indeed, many Bulgarian educators and s received their education at Daskalolivnitsata and scattered throughout the country to spread the teachings of the Bulgarian enlightenment.

After the Liberation /1878/, the building was used as a public hospital for some time and then again as a school.

The building has two floors; three large separate premises which were probably used as craft shops are found on the ground floor.

The entire first floor was used for educational purposes and there were two classrooms, a ‘s room and a separate room for school supplies. Today there is an exposition of items used for teaching there – textbooks, teaching aids and a globe. The building of Daskalolivnitsata was restored in 1963 and another exhibition was placed there, dedicated to the history of Elena from the emergence of the town to the Russo-Turkish War (1877-78).

There is an exposition on the ground floor – “Christian art from the second half of the nineteenth century”. The icons and religious objects of the exhibition were transferred there from the ruins of Archangel Michael Church in the village Shilkovtsi.

Kamburov Inn, located in the lower part of the courtyard of the complex, houses an ethnographic collection. Here you can see ladies’ and men’s clothes and items from the everyday life and culture of the residents of Elena from the late nineteenth and early twentieth century. The Inn was located in the village Yovkovtsi, but due to the construction of Yovkovtsi Dam the building was dismantled and moved to Elena.

The St. Nicholas Church is located in the school yard. It is the oldest church in Elena and the region. The first written record of the church’s existence dates from 1518. In the 1800s, the church was burned and destroyed in an attack of Ottoman brigands known as Kardzhali but in 1804 it was rebuilt in secret from the authorities in only 40 days. The outside architecture of the building may not attract attention, but the interior with its beautiful iconostasis and frescoes is impressive.

Assumption of Mary Church, which was built in 1837, is next to St. Nicholas Church. Until the Liberation of 1878, it was the biggest church in Northern Bulgaria and is 33 meters long, 21 meters wide and 25 meters high. You can learn more about the complex by taking advantage of the available guided tours.
Postcards and souvenirs are offered for sale in the complex.