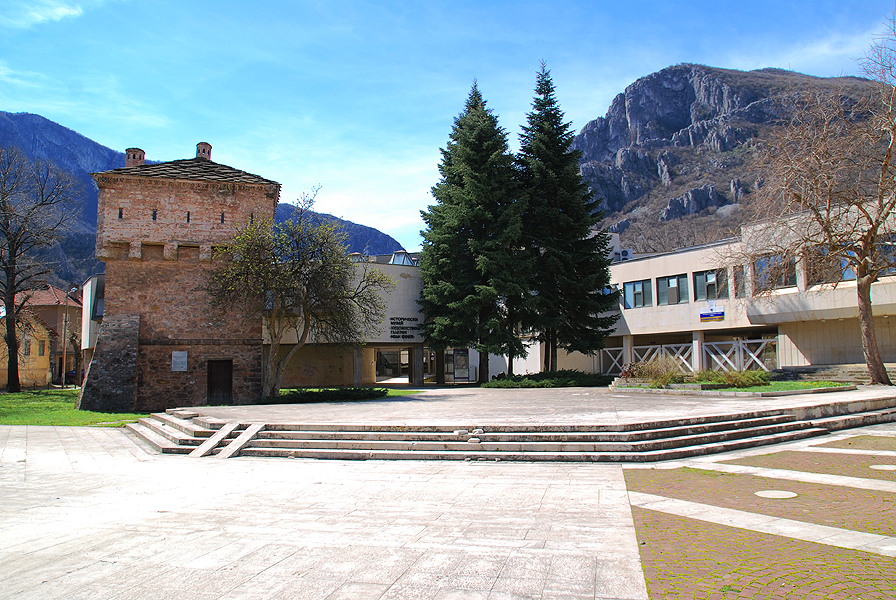 The town of Vratsa is located in Northern Bulgaria, 110 km north of Sofia. The first museum collection in the town was associated with the name of Hadji Tosho Tsenov (1749 – 1836) – a wealthy merchant from Vratsa. Later on his son Dimitraki Hadjitoshev (1780 – 1824) added to it. In 1953 a Regional National Museum was set up in Vratsa and in 1956 its first exhibition was opened in the Meshchii Tower when part of it was declared an art gallery.

In 1976 Nikola Voyvodov Ethnographic-Revival Complex was opened in Vratsa. Today it comprises the exhibition at Nikola Voyvodov House-Museum (that tells about the life and work of Nikola Voyvodov (1842 – 1867) who dedicated his life to the liberation of Bulgaria from the Ottoman rule) and the Urban Life Exhibition in Kapitanskata House (the Captain’s House) (that displays authentic objects and household items of a restored urban home of a middle-class family from the beginning of the 20th century).

In 1987 the buildings that housed St. Sophronius of Vratsa Ethnographic-Revival Complex were added to the Regional History Museum. The complex consists of several sites: The Ascension School, The House of the Hadji, Ivan Zambin House, Grigoriy Naydenov House, The Church of the Holy Ascension, the exhibition of transportation vehicles, craftsmen’s workshops, and the exhibition of farming equipment.

The main building of the museum houses several exhibitions. The Archaeology Section is spread around the PrehistoryHall, the Antiquity Hall, the Middle Ages Hall, the Thracian Treasures Hall, the Rogozen Treasure Hall, and the Lapidarium.

The Prehistory Hall presents the development and the achievements of human societies from the most ancient times until the Roman Age. Among the exhibits visitors will find pottery, items, tools, and weapons typical of the different historical periods.

In the Antiquity Hall artefacts that date back to the Roman and the early Byzantine Ages (1st – 6th centuries) are displayed. The Roman bronze diploma, the religious clay vessel, the collection of stone sculptures, the bronze medical tools, and the bone amulet exhibited there are remarkable.

The Middle Ages Hall illustrates the cultural and historical heritage of Vratsa Region in medieval Bulgaria (7th – 14thcenturies). The typical Old Bulgarian adornments, the bone icons-amulets, the silver reliquary, the everyday items and the tools are of interest to visitors.

The finds discovered at Mogilanska Tumulus are displayed in the Thracian Treasures Hall: gold wreath and earrings, a unique gold-plated silver greave, etc. The treasures of Moesia (Bukyovtsi) and Galiche can also be found there. They comprise silver, gold-pleated and gold ritual vessels, applications and plates depicting the Mother Goddess and the Thracian Horseman.

In 1999 a specially equipped hall was constructed and opened for the Rogozen Treasure – the biggest Thracian treasure that was ever discovered on the territory of Bulgaria. It comprises a family dinner set of 165 gold-pleated items made of silver that belonged to a Thracian royal dynasty. It dates back to the end of the 6th and the 4th centuries BC.

Botev’s Hall is dedicated to the legendary band of poet and revolutionary Hristo Botev (1848 – 1876) whose heroism marked the epilogue of the April Uprising of 1876 against the Ottoman rule. Among the exhibits visitors will find original photographs and archive materials, the Manifesto for the Declaration of the Russo-Turkish War of 1877-1878, volunteer force orders, medals, weapons, etc.

An exhibition consisting of 1000 mineral (precious and semiprecious stones), rock and fossil (phytoliths and zooliths) specimens is displayed in the Stone Rainbow Hall. The majority of the items were discovered in Bulgaria, but there are also exhibits from Europe, America, Asia, and Africa. Some of the minerals displayed are new to the world and were found in Vratsa Ore Region.

The exhibition at the New History Hall follows the development of Vratsa Region up to 1918. It demonstrates the economic, political, and cultural characteristics of the town of Vratsa and Vratsa Region.

Information materials, guidebooks, and souvenirs are sold at the Museum.