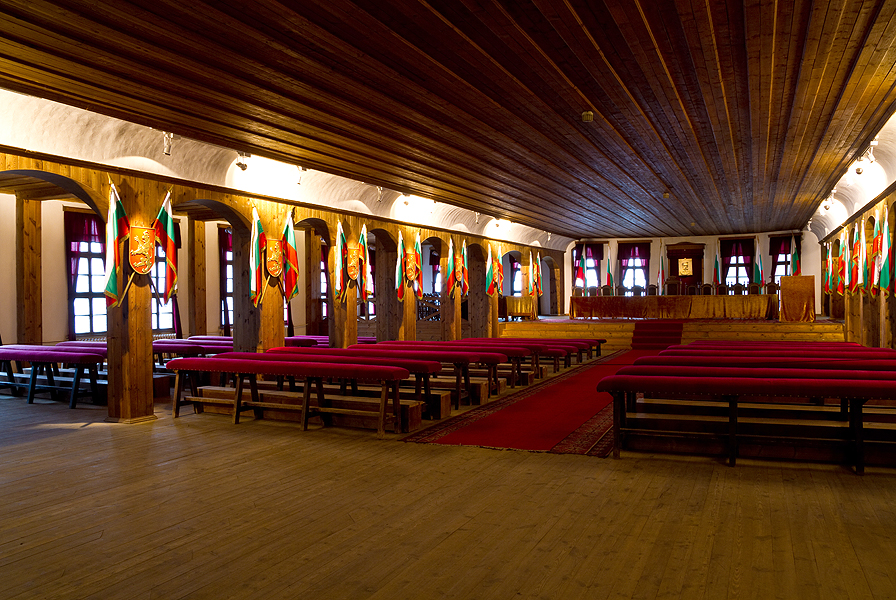 The Museum of the Bulgarian Revival and Constituent Assembly is situated in the northern part of Saedinenie Square (Unification Square) in Veliko Tarnovo, in the building of the old Turkish konak (police office in the Ottoman Empire).

The building is cruciform, with an arch-shaped northern entrance. It was built by Kolyu Ficheto (one of the most prominent Bulgarian builders of the 19th century) in 1872. The terrain on which the building was constructed is terraced and that is why it has two storeys on the northern side and four – on the southern.

The adjustment of the building to the needs of the museum was completed in 1985. The exhibition is spread on three levels.

On the first level visitors can see exhibits demonstrating the development of Christian art during the Ottoman rule (end of the 14th century – end of the 19th century). Focus is placed on the collection of icons from the mid-16th century, the works of the Tryavna School of Arts, the icons-primitives, and the works of Stanislav Dospevski (1823 – 1878) and Nilolay Pavlovich (1835 – 1894), the first Bulgarian academically educated artists.

Works of master wood-carvers such as royal gates, crosses, apostle friezes, church plates, Mount Athos wood-cut icons, and a shroud dating back to 1559 are also included in the exhibition.

The other part of the hall is dedicated to Tarnovo and the region during the Bulgarian Revival Period (18th – 19thcenturies). Among the exhibits visitors will find items, objects and documents related to 17 of the 22 crafts developed in the town such as goldsmithery, pottery, iron-smithery, tannery, tailoring, furriery, etc.

Many illustrations demonstrate the domestic and international relations of Tarnovo traders, as well as the birth of manufacturing. Models and photographs allow visitors to follow the development of architecture and construction during this period. Special place is given to the magnificent architectural monuments built by Kolyu Ficheto.

The second level reveals the stages and the most important moments of the struggle for national liberation of the people from the Tarnovo Region during the Ottoman rule such as the rebel movement, the different uprisings, including the April Uprising of 1876, the Russo-Turkish War of 1877–1878, etc. Special focus is laid on the struggle for independence of the Bulgarian church and the development of education and community centre work.

The hall, where in 1879 the session of the Constituent Assembly (the first Bulgarian National Assembly after the Liberation in 1878) which laid the foundations of modern Bulgaria was held in Tarnovo, is restored on the third level of the museum.