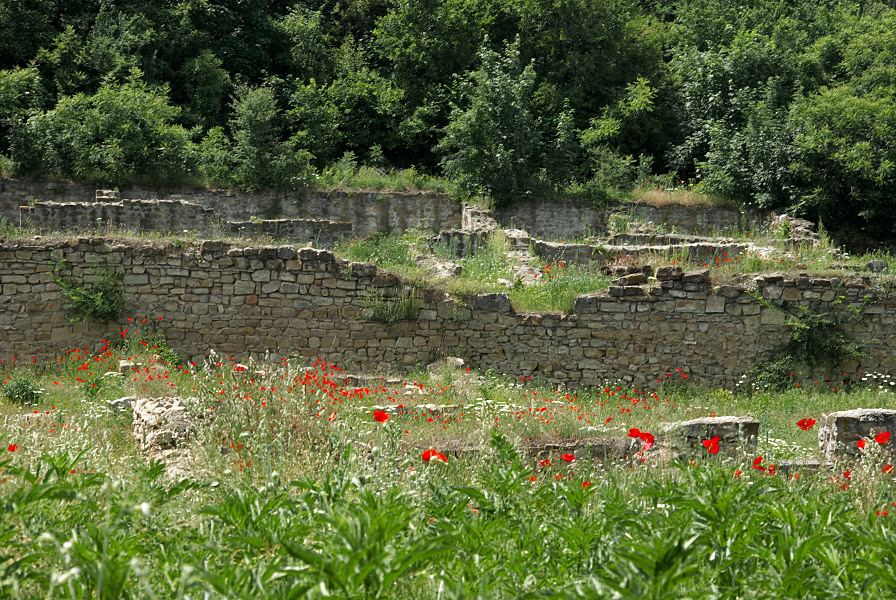 The remains of the Roman Legion Camp Novae are situated 3 km east of Svishtov. This is the best researched military camp, situated within the border territory of the former Roman Empire. Novae was established on the bank of Danube river as a military camp of the 8th Augustian Legion around the 45th year AD. The camp consisted of observation towers and fortresses, in which military units were placed – cohorts and legions.

Novae was an extremely important part of the defense line of the Roman Empire, because the legion accommodated here was guarding the conquered territories in Thrace and Macedonia from the raids of tribes coming from the East.

Initially, the camp was spreading on an area of 17 ha, but gradually it enlarged by another 10 hectares. It had a rectangular shape, and there was a gate on each of its walls. The legion headquarters, military hospital, officers’ residences, the legion bath, military cantonment, residence of the legion leader and the barracks of the assisting troops were situated behind the fortified walls of the camp. The civilian settlement was situated outside the fortified walls.

Gradually the ancient town changed its look; new buildings, churches, crafts workshops appeared. In the 5th – 6th century Novae was also a headquarters of a bishop.

Nowadays only remains of the former fortifications and buildings can be seen. Computer restoration of the military camp and the buildings around it can be seen on information boards amidst the remains. Novae was mentioned for the last time in the beginning of the 7th century.

The “Principality” or the headquarters of the legion was the largest construction found in Novae. Many statues and coin treasure were found on this place. They can be seen in the visitor center, built next to the excavations. The remains of the military hospital (valetudinarium) are also interesting to see. An information board shows what the building had looked like, where up to 300 legionnaires had been healed simultaneously. There was also a small sanctuary in the hospital yard, dedicated to the gods of health – Asclepius and Hygeia.

The remains of a building with unknown designation were found outside the legion fortress, close to its west gate. For a long time it was considered a residence of the legion chief. The recently found inscriptions state that this had probably been a residence of high-ranking persons who had temporarily resided here.

In the 5th – 6th century the old legion fortress turned into an Early Byzantine town. The remains of the Bishop’s complex date back to those times. It consisted of a large and a small basilica, residential premises with impressive baths, and a building impressive in size, which was designated for receiving the pilgrims to the local martyr St. Lupus.

A baptistery impressive with its architecture was found west from the basilica entrance. It was an extension to the church in which Christianization was performed.

A Festival of Antique Inheritance has been conducted for a few years in Svishtov and Novae. Gladiator fights are recreated, demonstrations of Roman artillery are made, and scenes of literature works of Roman and Greek authors are played there. Traditionally, multiple foreign groups participate in the festival.

Novae was declared an architectural and constructional monument of national significance in Issue 78 of the State Gazette of 1968.

A visitor center is established in the archaeological reservation, where various services are offered – guided tours around the site, lectures, etc. Such kinds of services are also offered by the tour guides from the Historical Museum in Svishtov.