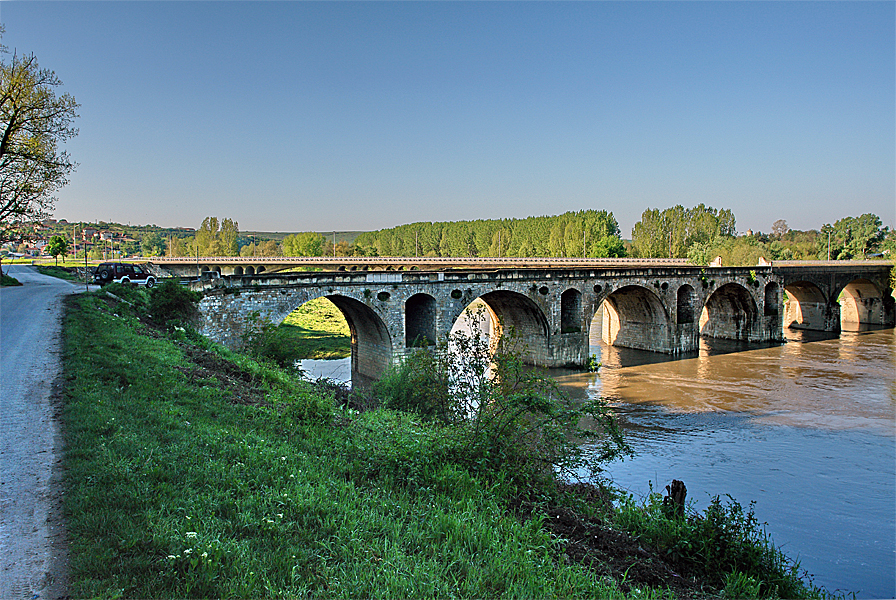 The Byala Bridge is situated at the northeastern part of the town of Byala, Ruse Municipality. It was built over the Yantra River in 1865-1867 on the orders of Mithat Pasha, Vali of the Danube Vilayet. Its construction was necessitated by the new road crossing the Yantra River at the town of Byala that connected Ruse, the main town of the Danube Vilayet, with Tsargrad, the capital of the Ottoman Empire.

Polish engineer Lyudmil Rola who was in Mithat Pasha’s employment demanded to be paid 3 million groschen in order to build the bridge, while master Kolyu Ficheto, the most famous master builder from the Bulgarian Revival Period, agreed to construct it in exchange of 700 000 groschen and he put his honour and life at stake.

First, master Kolyu Ficheto set about making a wax model of the bridge, in order to calculate how much money would the construction cost. This was the only project for which the master builder prepared a model. While he was building the bridge at Byala, Kolyu Ficheto also completed The Holy Trinity Church in the town of Svishtov.

Blacksmiths from Gabrovo, woodworkers and stone-cutters from Tryavna and Dryanovo, and peasants from Byala all helped for the construction of the bridge. It is 276 m long and 9.5 m wide, supported by 13 props and it has 14 arches. A marble slab with an Arabic inscription is set in the middle of the bridge.

The stone bridge at Byala is a remarkable piece of work from the Bulgarian Revival Period. The props are decorated with sculptures of symbolic creatures, such as gryphon, lion, nymph, and swan. The bridge is a true piece of art. It is a unique combination of architecture and sculpture. uch ornaments were used only for the decoration of buildings before the completion of the bridge. The rough stonework of the bridge is faced with thick, well-finished limestone. The abutment walls have wavy ends. Each abutment wall resembles a building facade, the bridge spans are shaped as open and closed windows.

On behalf of the Sultan, Mithat Pasha decorated the master builder with the Order of the Medjidie, gave him 50 thousand groschen and a large piece of land in Tarnovo.

The western half of the bridge was destroyed during the big flood in 1897. In 1922-1923 a concrete extension was built replacing the demolished part of the bridge. In 1977 a sculpture of the builder was erected there.

The bridge was declared an architectural monument of art and culture by virtue of Protocol No 3 of the National Council for the Protection of Monuments of Culture of 10 April 2000.

The bridge at Yovkovtsi Village over Veselina River is a prototype of the Byala Bridge.