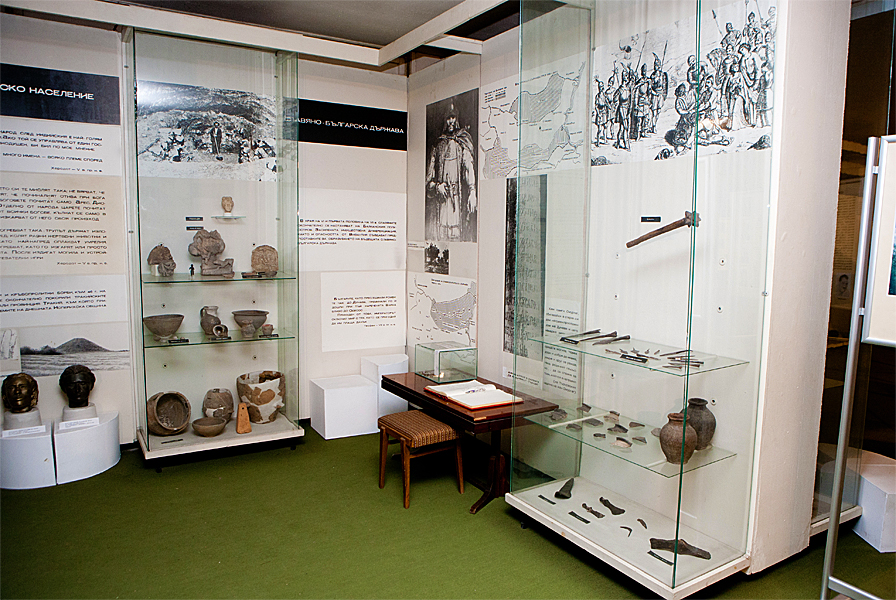 The town of Isperih is situated in the north-east part of Bulgaria, 85 km east from the city of Ruse, and 145 km north-west from the city of Varna. The regional Archaeological Society “Khan Omurtag” was established in the town in 1927. It set the beginning of museum activity in the town. Its members gathered the first collection of archaeological finds there. In1975 a permanent exposition was established in the newly built community center in Isperih. In 1978 the collection became a branch of the Regional Historical Museum in Razgrad, and in 1984 the branch obtained the statute of an independent museum.

Nowadays the museum possesses more than 30 000 exponents, as well as an ethnographic house, a reception center and archaeological bases in the Historical and Archaeological Reservation “Sboryanovo”, and a wind mill in the village of Belintsi.

The permanent exposition is situated in the building of the community center “Saznanie” in the center of the town, on an area of 180 square meters. It traces the history of the town of Isperih from antiquity to the present day with the help of archaeological and ethnographic materials, documents, pictures and personal belongings of famous people from the town and the municipality.

The Art Gallery is a branch of the Historical Museum in Isperih and possesses a rich picture fund.

One of the most interesting sites of the Historical Museum is the Historical and Archaeological Reservation of Sboryanovo, declared in Issue 96 of the State Gazette of 1988. Until now over 140 archaeological sites from various historical periods have been registered in the reservation. The most impressive ones are the Sveshtarska Royal Tomb, Demir Baba Tekke, Getae Capital of Helis, Kamen Rid Sanctuary and the Early Medieval Locality of Byuven Kasaba.

The most significant find in the region is the Sveshtarska Tomb, found in 1982 below Mound No 7 of the East Mound Necropolis of Sboryanovo (Ginina Mogila). It is a unique monument of the Thracian funeral architecture and dates back to the first quarter of the 3rd century BC. As of 1985 it has been included in the list of the global cultural heritage of UNESCO. One can get to the tomb from the village of Sveshtari or the village of Malak Porovets by a maintained asphalted road, which crosses the Historical and Architectural Reservation of Sboryanovo.

Another site included in the reservation of Sboryanovo is Demir Baba Tekke. The place, on which the tekke was built in the beginning of the 17th century, was sacred for the various tribes and people who had inhabited this region for 2000 years before it was constructed. Only the türbe (a tomb) of the Alian Saint Demir Baba is the only construction that has remained. A rock alter is also preserved by the entrance of the internal yard. It is open all year long during the day. One can reach it by an asphalted road, a maintained alley and a staircase, starting from the parking lot of Ahinora hut in Sboryanovo. It can be visited individually (there are information boards) or with a tour guide from the Reception Center at the Sveshtarska Tomb.

The Getae Capital of Helis is also a part of the reservation. Helis is a fortified Thracian town built during the last quarter of the 4th century BC on an area of more than 100 dca. One can reach the site by a well maintained asphalted road, connecting the villages of Malak Porovets and Sveshtari, and crossing the reservation. It can be visited individually (there are information boards) or with a tour guide from the Reception Center at the Sveshtarska Tomb.

Kamen Rid, on the other hand, is a sanctuary from the early stone age, built by the Getae for making sacrifices to the God – Sun. One can reach the site on foot along a wide dirt road, starting from the parking lot in front of the Atinora hut in the reservation of Sboryanovo. It can be visited individually or with a tour guide from the Reception Center at the Sveshtarska Tomb.

Early Medieval Settlement in the locality of Byuven Kasaba in the reservation of Sboryanovo is an ensemble of sunken and semi-sunken residential, commercial and representative buildings. A small chapel was also found during the research. The excavations continue to the present day.

A museum site – Ethnographic House – also functions in the center of Isperih. Articles and tools of the life and occupation of the local population can be seen inside it. Temporary monthly exhibitions are dedicated to various aspects of the occupation and the style of life of the population in the past and of contemporary craftsmen.

The ethnographic collection “Common Life of Christians and Muslims in the Ludogorie (Deliorman)” established in 1999 is present in the Ethnographic Museum. Most of the articles there are donated by the local resident and region specialist – Boris Iliev. It is situated in the end of the village of Sveshtary, on the road turn to the Sboryanovo reservation.

At a distance of 15 km from Isperih, in the direction to the city of Varna, in the village of Belintsi, is situated an entirely wooden Wind Mill – an immobile cultural monument – constructed in the beginning of the 20th century. Here you can see grinding of grain by two millstones and to learn about the construction, history and significance of wind mills in the region.

Since 2002 in the last two days of October the Historical Museum of Isperih has organized Days of the Cultural and Historical Heritage of the Municipality of Isperih. They include exhibitions, lectures, books presentations, scientific conferences, etc. The museum has organized Corn Fair as a part of the event since 2005. Its visitors and participants can taste kachamak (a traditional meal prepared from corn flour) prepared before them, enjoy the rich culinary exhibition of corn products, apply their skills in making of articles from corn foliage, take a look in the past through various restorations and participate in organized game. It is conducted in the Ethnographic House.

The museum also organizes the Traditional Automobile Passing Along the Way of Sheikh Bedreddin, which begins in the last Monday of October from Silistra. Sheikh Bedreddin had been a leader of a revolt of Bulgarians, Turks and Romanians, which burst in 1413 in Dobrudzha against the Sultan’s authority.