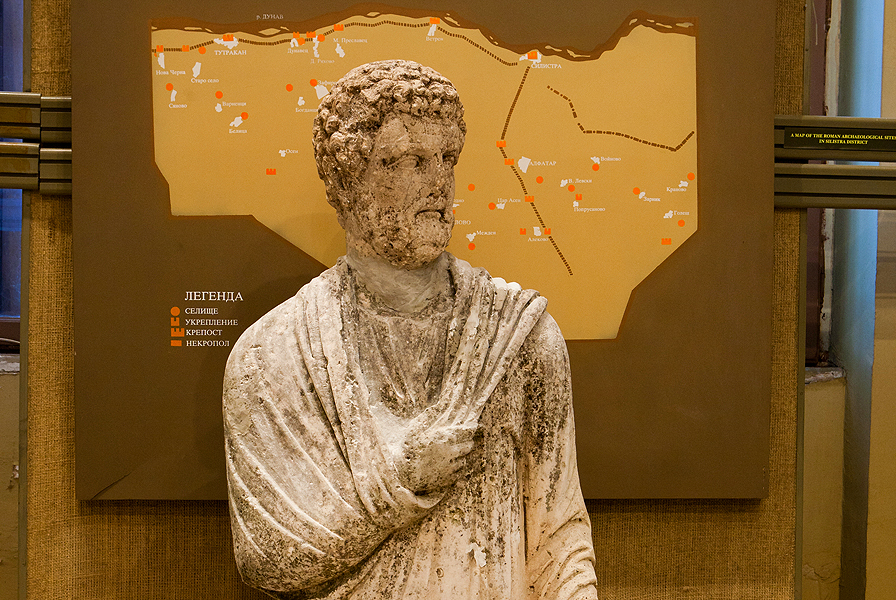 The archaeological exhibition at the Silistra Museum of History is spread out on an area of 400 sq m in an impressive building from the beginning of the 20th century. The building is a massive two-storey structure built in the period 1923 – 1924.

The exhibition is thematically divided into periods: Prehistoric Age, Antiquity and Middle Ages. The main collection of Silistra archaeological exhibition comprises nearly 42 000 pieces, among which one will find a few remarkable items.

Central spot is given to the biggest ever Roman stone sundial discovered in Bulgaria.

Other exhibits include a Roman sports helmet-mask with gryphons depicted on it; treasure of  precious metal grave finds from Roman times and the Middle Ages; a chariot from the funeral of a distinguished Roman magistrate dating from the end of the 3rd century, the only one found on the former territory of the Roman Empire; a statue of a Roman woman; a gold ring that belonged to one of the first Christians, dating from the end of the 3rd century; collections of gold adornments dating back to the 3rd – 4th centuries and 13th – 14th centuries; a column with the name of Khan Omurtag (who reigned in the period 814 – 831) on it; seals of Bulgarian and Byzantine rulers and high-ranking aristocrats; the gold adornments of the princesses (despotitsa and despina) of Drastar dating back to the 14th century; coin collections and treasures dating back from the 4th century BC to the 15th century AD.

Silistra Museum also contains one of the richest collections of medieval crosses in Bulgaria, exhibiting crosses made of different materials that reveal various cross-making techniques from the period 10th – 13th century.

The lesson in the history of the region continues when you go outside the exhibition halls: the garden around the building is arranged as a lapidarium with marble statues and stone slabs, ancient sarcophagi, columns and remains of other architectural elements.