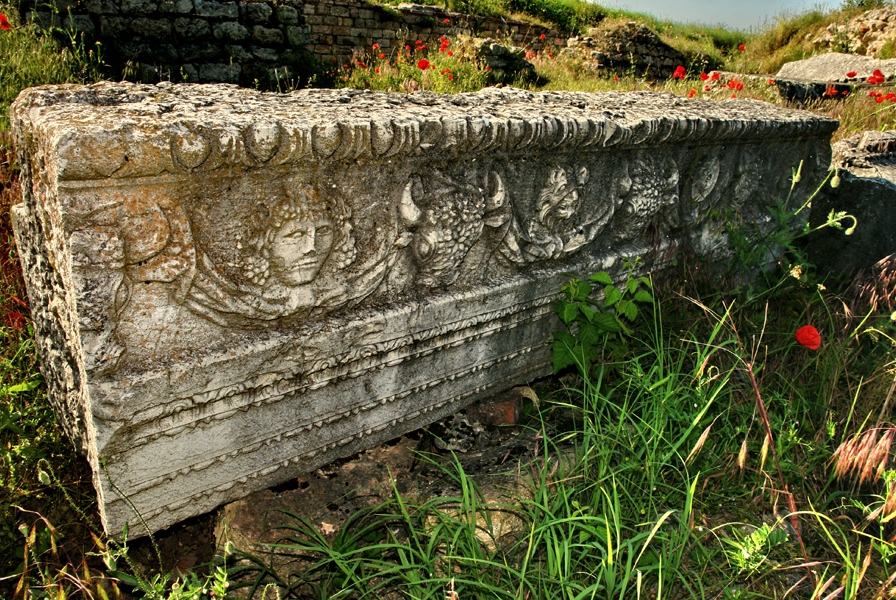 The antique town of Ulpiya Eskus is situated near the bank of the river Danube, at a distance of about 22 km from the town of Gulyantski, county of Pleven. The Roman town had been established in the 1st century AD as an heir of a Thracian settlement. Later, the camp of the Fifth Macedonian Legion was constructed around it.

The military camp received the statute of a colony after the triumph of Emperor Mark Uplius Trayan (98 – 117) over the Dakes. To mark the victory, Ulpiya Eskus was declared a town with its own management. The Roman town turned into an important crossroad and experienced great progress during the 2nd – 3rd century when the central part of the town was built. Ulpiya Eskus was constructed according to the manner, typical of the Roman towns. It had a rectangular shape, and its streets were following the direction East – West and North – South. Even today, visitors can see remains of street, temples, and a large public basilica. The total territory of the town was about 280 decares.

The town was also living its best years in the 4th century – during the ruling of Emperor Konstantin the Great (307 – 337).Then Constantinople became the capital of the Roman Empire, and a large stone bridge was constructed on the bank of the Danube river. On 5 of July 328 the Emperor came personally for the official opening.

Ulpiya Eskus was demolished by the Avars in the end of the 6th century. Another settlement had existed on the remains of the antique town from the 10th to the 14th century.

The first excavations in the antique town were conducted in 1904 -1905. Later, in 1947 – 1951 archaeologists found a large public building, and one of the best Roman multicolor mosaics in the Bulgarian lands was found in one of its premises. A scene of the comedy piece entitled Achilleans is portrayed in the central part. The mosaic was restored and preserved, and nowadays one can see it in the Regional Historical Museum of Pleven. A forum complex, temples of the Capitola Trinity (Jupiter, Junona, and Minerva), a large basilica, public buildings, baths, etc. were also found.

The antique town is a part of the sites of the Regional Historical Museum of Pleven. This is why a part of the finds, found in Ulpiya Eskus, are presented in a special hall of the museum.

By issue 88 of the State Gazette of 1965 the Roman town was declared an architectural and constructional monument of culture of Antiquity and the Middle Ages in the category of national significance sites. In 2011 by issue 104 of the State Gazette, Ulpiya Eskus obtained the statute of an archaeological reservation.