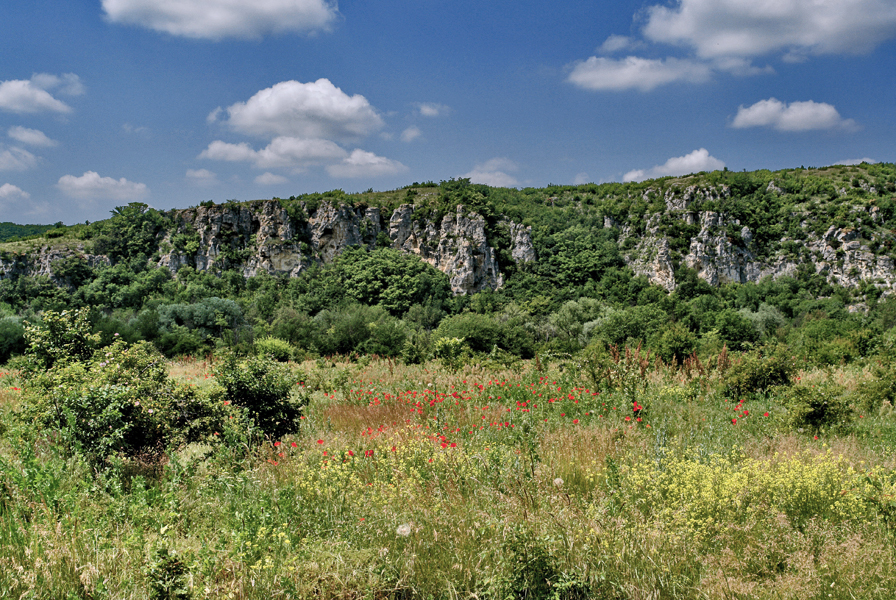 Rusenski Lom Natural Park is located 20 km south of Ruse and is named after Rusenski Lom River – the last right-side tributary of the Danube River. It takes up a territory of 3408 hectares and has been a protected area since 1970.

The beautiful river terraces, the high vertical rocks, the caves, the rock formations, the great biological diversity, and the historical monuments turn the park into a magnificent place of interest. Apart from the fact that Rusenski Lom Nature Park is suitable for scientific research, it also provides various opportunities for active and ecotourism.

The combination of rocks, forests, rivers, and caves with meadows is reason for the great biological diversity on the territory of the park. The flora of Rusenski Lom Park includes 902 species. The fauna consists of 10 amphibians (5 of which are protected), 19 reptiles, 22 types of fish, crayfish, snails and river mussels, and 66 mammals. The birds are among the most important inhabitants of the park: 190 species, 110 of which nest there. The conditions in the park are particularly favourable to rock-nesting birds, such as the Golden Eagle (Aquila chrysaetos), the Egyptian Vulture(Neophron percnopterus), the Long-Legged Buzzard (Buteo rufinus), the Ruddy Shelduck (Tadorna ferruginea), the Saker Falcon (Falco cherrug), etc.

There are different marked routes in the park that allow tourists to observe its biological diversity. Gramovets is a route giving visitors the opportunity to get a good look at the beautiful landscape of the rivers Lom, the great variety of plant and animal species, and the different historical sites on the territory of the park. The route starts at the Rock-Hewn Churches of Ivanovo Archaeological Reserve and continues on a beautiful trail that passes through a dense forest to reach the place where Beli Lom River and Cherni Lom River merge and give birth to Rusenski Lom River. A dirt road that leads to a cabin with a fireplace passes below impressive rocks inhabited by rare bird species. This route is approximately 12 km long.

The Dendropath is a route that familiarises tourists with the plant species in the park. The total length of the route is 6 km and it starts from Nisovo Village. The tour begins with a climb on a wide trail to a rock platform that offers a panoramic view to Malki Lom River. The route includes a level dirt road with places where fires can be light and a small bridge over the river. Tourists can see over 20 local tree and shrub species. Information boards are in place for their convenience. In case they want to, visitors can make the route 4 km longer by going to Golyam Nisovski Monastery where they will find a recreation spot.

Another eco-trail leads to the venerable elm-tree near Nisovo Village. The 6 km-long route starts at the eastern end of the village, passes through a 17th century Christian cemetery, climbs up the rocks, goes past the fish-ponds of the village and follows a trail to a platform located up on the rocks which offers a view to the remains of Galitsa Village. The trail climbs down to the river and reaches a recreation spot where a centuries-old European White Elm stands tall. Then it goes on to a demolished water-mill. In the period between April and October hunting bats can be watched at dusk from the bridge over Beli Lom River.

The last route is also historically oriented – it offers a walk in and around Cherven Fortress. The starting point of this route is Cherven Village. Tourists must cross the car park at Cherven fortress and climb the stairs leading to the entrance of the stronghold. They can see nitre-excavation rock recesses. The foundations of 13 churches, a boyar’s palace, and one of the two original medieval battle towers in Bulgaria are all preserved there. There is a staircase to the river at the western side of the fortress. Tourists can also see an authentic water-supplying piece of equipment which was used in the fortress. A guide appointed by the Ruse museum is available in the fortress.

All routes are well-marked and do not require special training to cover. If tourists follow the marking closely, they will not have to be accompanied by guides from the nature park.

Guided tours are only available upon request in advance. Hunting is prohibited on the territory of the nature park, as well as lighting fires outside the spots that are especially designed for the purpose.

Information materials and souvenirs are sold at the stores in the towns and the villages located on the territory of the park.