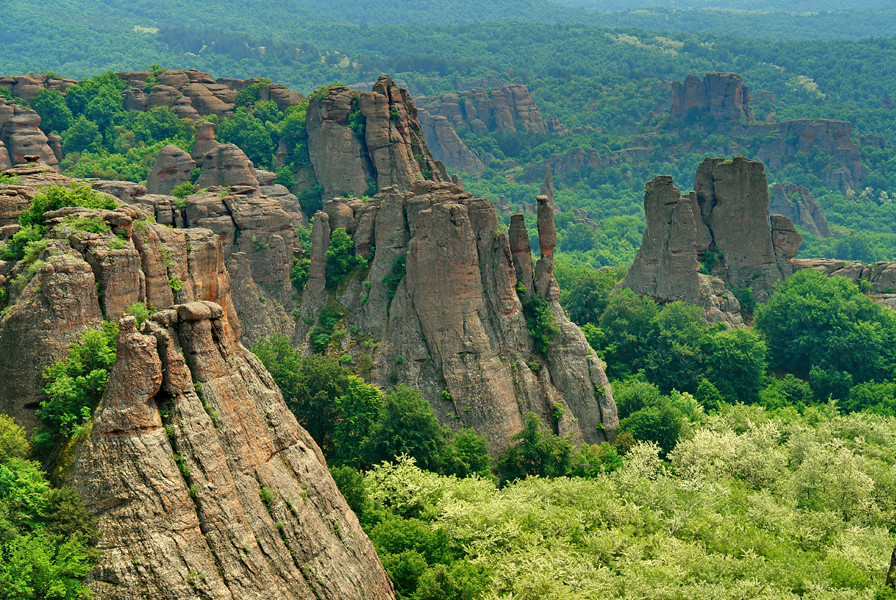 The Belogradchik Cliffs, a unique natural phenomenon, are roughly 30 km long and 6-7 km wide. The cliffs extend from west to east beginning at Vedernik Peak (1124 m) near the city of Belogradchik and skirting the villages of Borovitsa and Belotini.

The Belogradchik Cliffs were sculpted by natural forces over a period of more than 200 million years.

Their iron ore content gives them their reddish coloration.

They vary in form, and are more than 100 meters high

The first group of cliffs are situated near the city of Belogradchik. The most famous of these are called The Rider, Madonna, The Dervish, Adam and Eve, The Mushrooms, The Lion, The Monks, The Bear, The Castle, and The Shepherd Boy.

Another group of cliffs is located west of the city. The most famous of these are The Zbegove (The Strongholds), Erkyupia and Borich. A well-marked road suitable for motorized transport leads to these formations. Among the towering cliffs are deep ravines, and here can be found the most interesting rock formations – the Twins and the Lesser and Greater Zbeg, once the site of fortifications. The cliffs served as a natural defense for the forces of Byzantium, Bulgaria and the Ottomans during succeeding epochs. In past centuries hundreds of steps were carved, some of which are still preserved. In many places can be seen the remnants of buildings, walls, pieces of brick, and fragments of pottery.

The cliffs near The Zbegove and Borich are amazing, resembling gigantic Sphinxes, monkey’s heads, mummies, mosques’ minarets and cupolas, winged serpents, and others.

Roughly 4 km to the east of the city is situated the third group, which include the cliffs near the Latin Gate and the Lipenik cave.

The fourth group is to be found between the villages of Borovitsa and Falkovets. Here are the celebrated Pine Rock, Bee Rock, The Torlak, and The Maiden’s Cliff.

The last group of cliffs is located near the villages of Gyurgich and Belotitsi.

In the fissures of the Belogradchik Cliffs the ancient Romans built fortifications that were later used by Bulgarians and Ottomans – The Belogradchik Fortress.

Today the fortress is as popular among tourists as the cliffs.

A hundred meters from the Belogradchik Fortress there is an Astronomical Observatory maintained by the Institute of Astronomy, part of the Bulgarian Academy of Sciences. The observatory has three telescopes available for visitors who wish to view the night sky.

Another natural attraction some 20 km from Belogradchik is the Magurata Cave, one of the largest and most beautiful caves in Bulgaria.

Littering is prohibited in the vicinity of the Belogradchik Cliffs, as is climbing on the cliffs.

In 2007, the Belogradchik Cliffs were nominated in a competition to select the New Seven Wonders of the World and they were among the foremost contenders, although they didn’t reach the finals.

The Belogradchik region is now without doubt a preeminent tourist destination. In 2008, the city won a national competition held by the EDEN program that honors superior tourist locations, thanks to its rich Thracian heritage and its remarkable natural beauty.