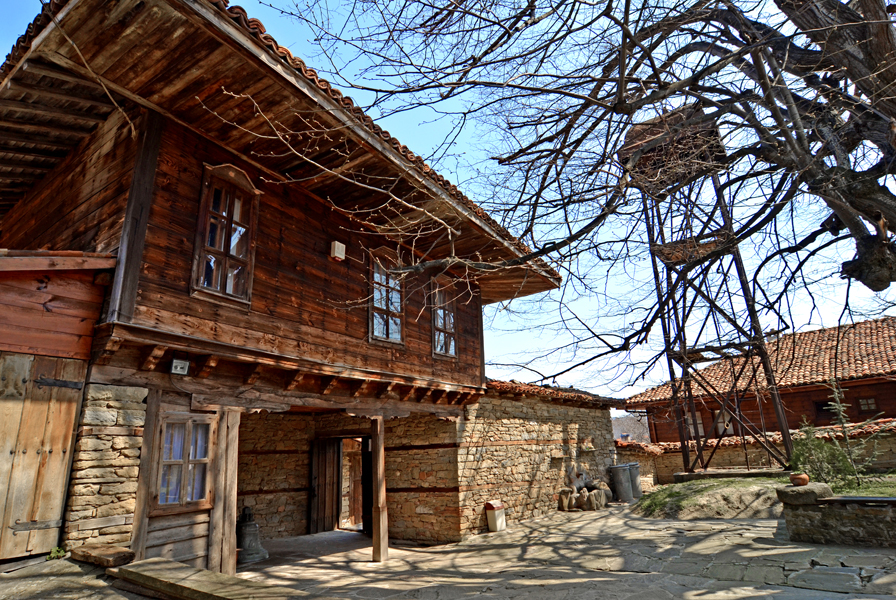 The region of the village has been inhabited ever since ancient times. In the 17th century Zheravna became a big craft and cultural centre with a population of a couple of thousand people, a main street and lots of shops. The main occupation of the local people was sheep breeding, together with different crafts.
Nowadays Zheravna has turned into an architectural and museum reserve with well-preserved and restored houses with decorations and exquisite wood-carvings from the Bulgarian Revival Period, narrow cobblestone alleys and lots of drinking fountains. The region abounds in springs and most of their waters spout from the fountains. 172 of the houses in the village were declared monuments of culture.

150 sites in the village were restored and revived, including St. Nicholas Church built in 1834. It displays a rich collection of icons, stone sculptures, and church plates.

The house where the famous Bulgarian writer Yordan Yovkov (1880 – 1937) was born is located in Golyamo bardo Square (Big Hill Square). Yovkov lived there until he turned 13 when his entire family moved to Dobrudzha. In 1957 the house was transformed into a museum that recreated the atmosphere in which the writer grew up. It was declared a monument of architecture and construction by virtue of publication in State Gazette, issue No 53 of 1978. The exhibition comprises documents, manuscripts and pictures of Yordan Yovkov that provide information about his life and work. The house is a simple one-storey building consisting of two rooms and a small anteroom. One of the chambers preserves the atmosphere of the typical room of the region with the furniture, the vessels, and the sleeping spot of the family. The other room keeps a collection of works by Yordan Yovkov. Central place in the exhibition is given to the pen which Yovkov used to write Legends of Stara Planina. This collection of short stories was inspired precisely by the birthplace of the author. A monument is erected in the all-green yard of the house that depicts Yovkov sitting on a chair and dwelling on something. Yordan Yovkov wrote both for children and adults. His books have been translated in more than 20 languages. His most famous works are Legends of Stara Planina, Evenings in the Antim’s Inn, If They Could Speak, the two dramatic plays Albena and Boryana, etc.

The building of the school, constructed in 1867, houses a picture gallery that comprises more than 450 paintings of Bulgarian and foreign artists. Every year it hosts travelling exhibitions of artists and ethnographical exhibitions from museums around the country.

Visitors of the House of Rusi Chorbadzhi (House of Master Rusi) can see an interesting exhibition where the different crafts practiced in Zheravna during the Bulgarian Revival Period are demonstrated. The enormous hand loom and the skillfully-weaved delicate linen fabrics produced by the women of Zheravna are particularly impressive. The house was declared a monument of architecture and construction by virtue of publication in State Gazette, issue No 53 of 1978.

Every year in the second half of August Dobromiritsa Rural Park, located near the village of Zheravna, hosts the National Festival of the Folklore Costume. One signpost at the entrance says that bad mood and entering without wearing a costume are strictly forbidden. The festival presents songs and dances from the different regions of Bulgaria: 100 low-voiced bagpipes, zurnas from the Petrich Region, firewalkers’ and mummers’ plays from all around the country, original crafts, dishes, etc.
The accommodations in Zheravna are in harmony with the spirit and the style of the architecture of the village. Visitors won’t find any modern-looking hotels there. The guesthouses are restored buildings from the Bulgarian National Revival that offer rooms which have preserved the typical atmosphere of the period.