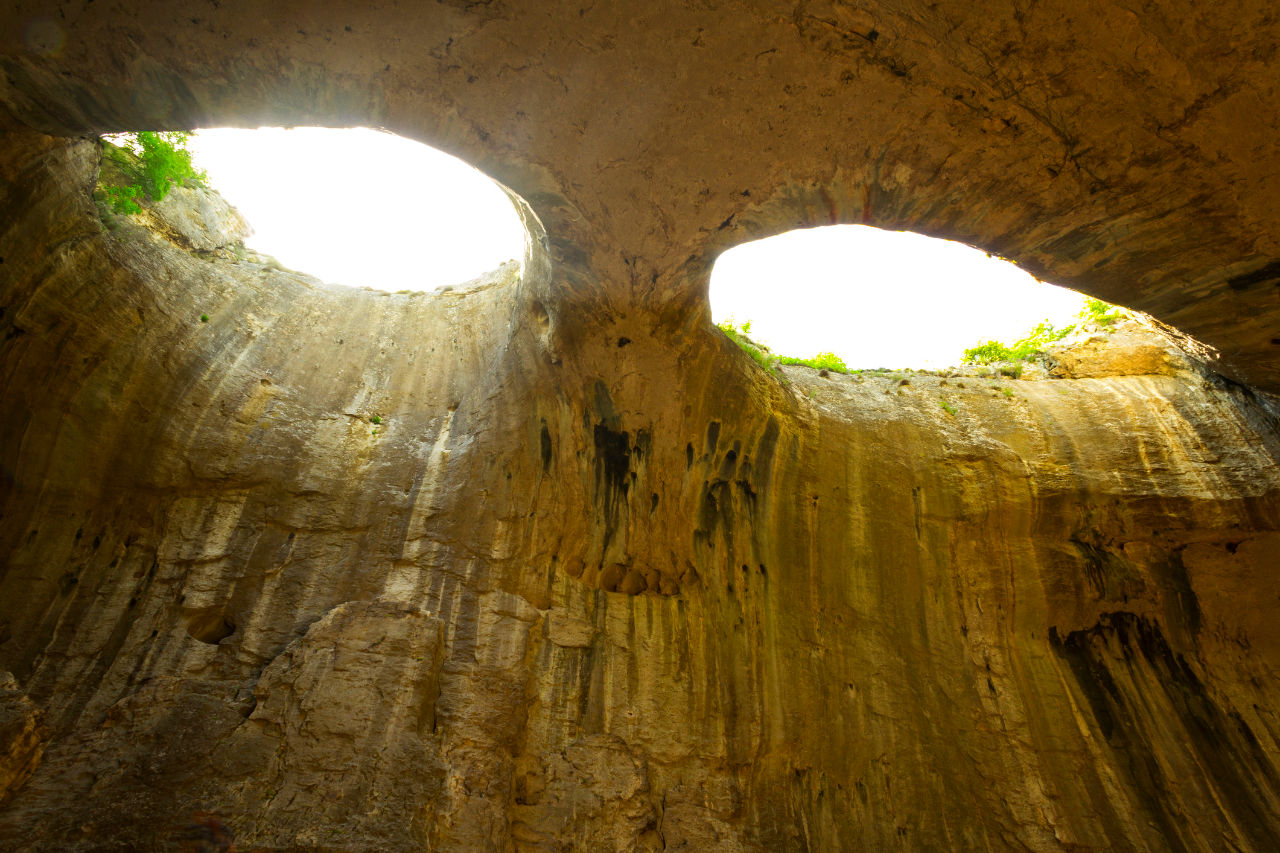 Prohodna Cave is one of the most famous and easily accessible caves in Bulgaria. It lies 2 km away from Karlukovo Village and 112 km away from Sofia.

The cave is a natural 262 m long rock bridge. It has two entrances – a big and a small one. A path beginning at the approximately 35 m-high small entrance crosses the cave and goes out through the big entrance (the biggest cave arch in Bulgaria – 45 m).

Prohodna Cave is naturally lit thanks to its large entrances and cave holes – natural holes on the ceiling. These cave holesare precisely what makes the cave unique. Situated next to each other and having similar almond-shaped forms, the cave holes bear striking resemblance to giant eyes that seem as if they are staring at the visitors.

It is not by chance that local people sometimes refer to them as The Eyes of God or The Eyes of the Devil. Seen from a specific angle, they even resemble a face that looks down, and when it is wet it seems as if they are “crying”. People who witness this natural phenomenon are astonished and a little excited – the incredible symmetry and location of the cave holes fill one with awe and a sense of mystique. The cave was declared a natural landmark in 1962. Several Bulgarian and foreign films were shot there. One of them is Time of Violence (1987).

Bungee jumps are organised from the big entrance. Prohodna Cave is a popular destination for climbers. There are sport climbing routes divided into several sectors. Their level of difficulty varies, but they are considered to be some of the hardest in Bulgaria.

Accommodation is available at the mountain hostel, but visitors are advised to make a reservation in advance. There is a junction on the Lukovit – Karlukovo road leading to the office of the speleological society.

The office building of Peter Tranteev National Speleological Society and Prohodna Cave are included in the list of the 100 tourist sites in Bulgaria. The cave is open for tourists all year round. A guide is not required. In the cold winter days it is advisable that visitors mind the huge icicles forming on the ceiling and around the cave holes and the slippery surface.