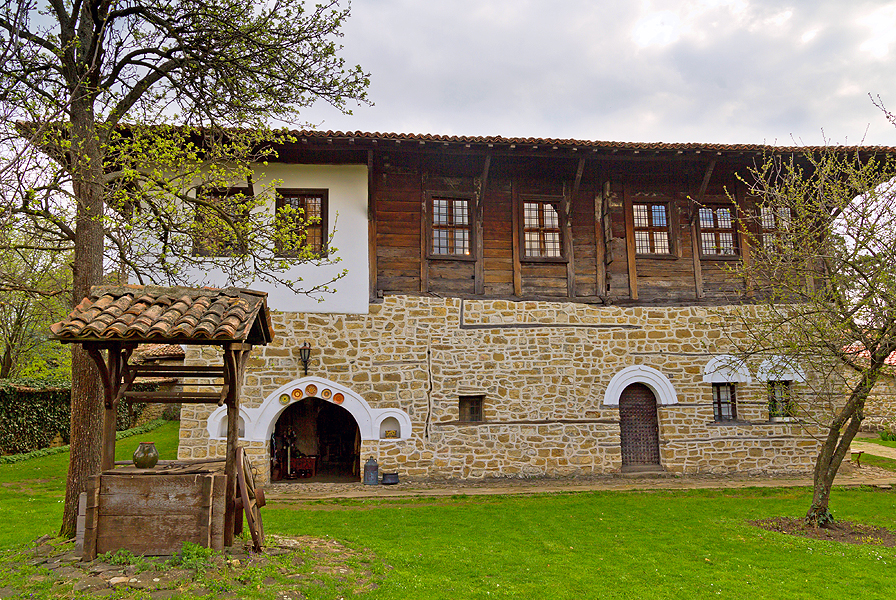 The village of Arbanasi is located on a high plateau 4 km from the city of Veliko Tarnovo.

It is known that the village existed during the time of the Second Bulgarian State (1185 – 1393).  At that time the Bolyari living in the capital Tarnovo used it as a summer residence. According to legend, the Tsar of Tarnovo minted coins here.

After the victory of Ivan Asen II (reign 1218 – 1241) in 1230 at Klokotnitsa over the forces of Episcope Teodor Komnin, the kingdom of Arbanasi (now Albania) became part of the Bulgarian Empire and many inhabitants of the new territories settled in the region. According to one account, the village was named after the homeland of the settlers.

The first written confirmation of the village’s existence, however, is in a decree by Suleiman the Magnificent in 1538. The main activities practiced by the residents of Arbanasi during the Ottoman rule were animal husbandry and trade. Some inhabitants bred silkworms.

During the 17th century, Arbanasi rose to prominence as a trading center. Traders from Arbanasi were renowned and traded throughout the Turkish Empire. The houses of wealthy traders from this period resembled small fortresses. They appeared severe and forbidding from the outside, without balconies or terraces, with bars on the windows and sturdy armored entrances. Within, however, they were richly appointed and most impressive. The entire interior was decorated with doors, windows, closets, floors with exceptionally ornate woodworking and plaster elements, all of which demonstrates the highly developed artistic skills of the builders.

Characteristic of the houses in Arbanasi is that because of the way they were built, it was possible to remain inside for long periods without going out, except to the well in the courtyard for water.

A century later the village was looted and set on fire by the Kardzhalisti (mercenaries engaged by the Ottoman Empire who usually marauded in gangs). The residents of Arbanasi, after suffering through an epidemic of cholera and several earthquakes, were forced to seek a calmer and more secure place to live.

After 1810, Arbanasi was gradually repopulated. Settlers arrived from the Hellenic and Trevnenic Balkans, but the village was overshadowed by the Turnovo revival. The glory that was Arbanasi is still evident in the many houses and cultic buildings, the traditions and customs, associated with its former residents.

The most interesting museums in Arbanasi are the Konstantsaliev house, The Birth of Christ Church, and The Church of the Archangels Michael and Gabriel.

The Konstantsaliev house is among the largest of the richly decorated houses that have been preserved. It dates from the 17th century. At a later date Atanas Konstantsaliev purchased and restored the house, and it is known by his name to the present day. In 1913, it was leveled by an earthquake. After that it was again purchased and converted into a museum. In 1958, an exhibit of artifacts from the 19th century was held in the house.

The The Birth of Christ Church is among the oldest churches in Arbanasi. It is divided into a men’s section (the narthex) a woman’s section (the vestibule), and a galleries that enclose these areas on the north and west. To the east the church adjoins The Saint John the Baptist Chapel. The narthex that can still be viewed today at first stood alone as a church, and the murals on its walls were executed in 1597. Also from this period are the murals The Last Judgment and The Birth of Christ. The murals in the women’s section are on the walls and entrance. The theme of the murals in the chapel are dedicated to their patron saint, John the Baptist. The church was declared an architectural and artistic-cultural monument in the 61st edition of the State Records, in 1978.

The Holy Archangels Michael and Gabriel Church was also declared an architectural and artistic-cultural monument in the 61st edition of the State Records, in 1978. The church is comprised of the men’s section (the narthex) and a woman’s section (the vestibule), The Saint Paraskeva Chapel and galleries. Two of the most interesting murals in the church are the Descent into Hell and The Birth of Christ.

The Saint Dimitar Church was declared an architectural and artistic-cultural monument in the 57th edition of the State Records, in 1969. It is located in what is now the center of Arbanasi. The chapel dates from the 16th century, which makes it the oldest surviving cultural monument in Arbanasi. The church as a whole was completed in 1621. Conservation and restoration of the murals that decorate its walls continue to the present day. The church is not open to the public.

The Saint George Church (declared an architectural and artistic-cultural monument in the 61st edition of the State Records, in 1978) is located in the southwestern part of Arbanasi and comprises a massive stone structure with dimensions that are 21 meters by 10 meters. The structure dates from the end of the 17th century or the beginning of the 18th century. Archeological excavation reveals that where the present narthex is now located an earlier cathedral once existed, dating from the 16th century. The church is not open to visitors.

The Saint Atanas Church is located in the northeastern part of Arbanasi. It was built during the 1630s. The icons in the church were completed in 1667. This church is open to visitors. It was declared an architectural and artistic-cultural monument in the 61st edition of the State Records, in 1978.

The Holy Mother of God Convent is located at the outskirts of Arbanasi, some 5 km from the city of Veliko Tarnovo in the direction of Gorna Oryahovitsa. It is one of a few sanctuaries near the former capital of Bulgaria that harbors painful memories of the Ottoman occupation. A visit to this convent may enhance a pleasant day or weekend in Arbanasi. The convent houses the miraculous icon of the Three-Armed Virgin, also known as the Weeping Virgin. According to historical accounts, after the razing of Tsarevets by the Ottomans, (1396), the nuns abandoned the convent and buried the icons. Years later a shepherd heard wailing that came from beneath the earth. That is how he found the icon, which he returned to the monastery. The convent’s yearly festival is on August 15 – the Day of the Virgin.

At the other end of the village is The Saint Nikola Monastery. It was founded during the time of the Asen tsars (at the end of the 17th century) and after the fall of the Bulgarian capital Tarnovo in 1393 it was destroyed by the Ottomans. In 1680, the monastery was rededicated, and at that time the church was built that still stands. Also at that time The Saint Iliya Chapel was built, and its murals have been preserved until the present.

In The Saint Nikola Church there is another wonder-working icon of the Virgin. As legend has it, the icon particularly aids fertility. Women who want to become mothers have to perform the following ritual – after praying before the Virgin they leave an offering of a coin (stotinka) on the icon. If the coin sticks, it means the Virgin has heard their prayers. If the coin falls, their desire to become mothers will not be fulfilled.

Arbanasi as an archeological-museum reserve that is included among the one hundred most important tourist destinations.

Arbanasi offers a variety of accommodations – it is possible to stay in a guesthouse appointed in the traditional style, in modern hotels and large hotel complexes, or in villas and lodges in the region.

Restaurants and other dining facilities offer typical Bulgarian fare and a wide range of regional specialties.