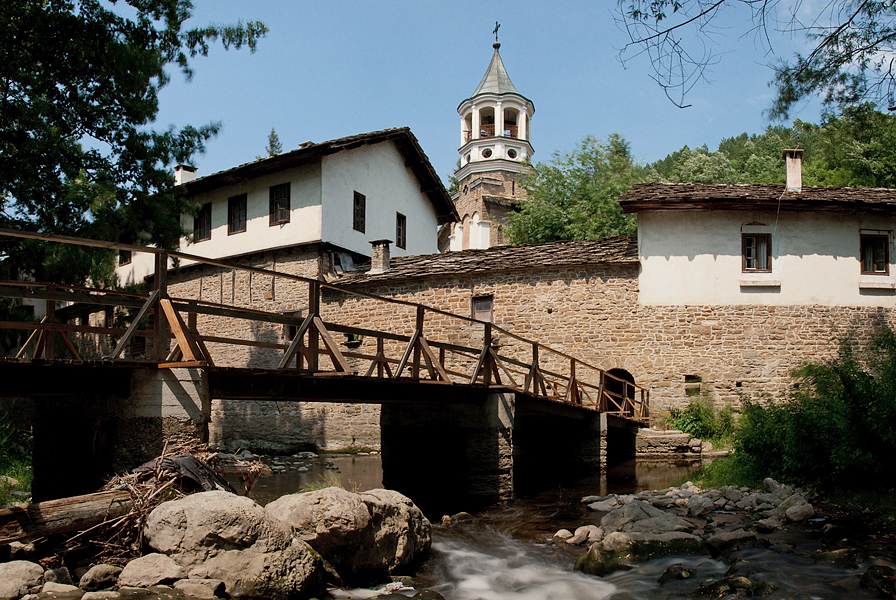 For centuries the Dryanovo Monastery “St. Archangel Michael” has been one of the centers of development of the Bulgarian Christianity and culture, and nowadays it continues to attract worshipers and tourists. The Monastery is situated at a distance of about 6 km from the town of Dryanovo, on the road to the town of Gabrovo.

The Dryanovo Monastery was established in the 12th century during the time of Tsar Kaloyan (1168– 1207). For the first time the monastery was built 2 km from the place where it is situated now. In 1393 the Ottoman Turks burned it down to ashes; in 16th century the local people restored it on the other bank of the river, but this time the holy monastery was also demolished.

On the place where it is situated now, the monastery “St. Archangel Michael” exists from the end of 17th century. In the monastery there was an enormous library, which turned it into one of the largest education centers during the Revival. The Kurdjalis (bandits who were usually acting in groups in the Ottoman Empire) set the monastery on fire for the third time, but after that it was restored again.

In 19th century a renovation of the holy monastery began, residential buildings were constructed, and in 1845 a new temple was raised.

The Monastery “St. Archangel Michael” is one of the centers of preparation of the April Uprising (1976) for liberation from Ottoman Dominion. Upon the rout of the uprising the monastery was demolished again. Soon after that it was partially restored and on 3 April 1877 its main temple was solemnly consecrated.

The museum exposition “Archaeology and Revival” is placed in the Dryanovo Monastery. The finds discovered in the region of the monastery are placed here and they describe the development of the region and the holy monastery. The exposition contains domestic objects, tools, coins, ceramics, etc. from the early stone age and the stone-copper age (4000-3000 years BC). A central place in the exposition occupies the history of the April Uprising. Among the exponents there are items belonging to the rebels, pictures, guns, clothes, etc. Information materials and souvenirs can be bought in the museum.

A resting corner is constructed in the monastery, and there is also a children playground. In front of its entrance, on the parking lot there are stalls on which souvenirs are sold. Near the church there is a mausoleum with a chapel and ossuary.The mausoleum was raised to the memory of the killed rebels, and their bones are kept inside it.

A hotel part works by the monastery “St. Archangel Michael”.

The Dryanovo Monastery was declared a national monument of culture by Decree of the Council of Ministers of 1971and it is a part of the 100 National Tourist Sites. The temple celebration of the monastery is celebrated on 8 November – Michaelmas.

The Bacho Kiro cave is situated near it, at a distance of about 300 m.

The region around the Dryanovo Monastery and the Bacho Kiro cave is an starting point for tourist passages – to the villages Bozhentsi, Gesha, Ritlya, etc.

The monastery is a starting point of the Dryanovo eco path, which passes along the banks of river Andaka, then by the Bacho Kiro cave. In 2003 in the region of the monastery was developed another eco path – Via Ferrata. The path begins from the holy monastery, passes by the railway line, and then it continues in the south direction by the bank of the Dryanovska river to the Sini Vir waterfall. The path is marked in blue and also has designative board-signs. After that along a stone staircase one can get on the edge of the stone crown of the Dryanovska river. The route presents a wonderful view towards the canyons of the rivers Dryanovska and Andaka. The eco path continues along the Strinava plateau, where remains of the Gradat fortress are laying. From here the path continues backwards to the Manastirsko Loze locality.

The tourist society Bacho Kiro provides a tour guide for the eco paths and the tourist transitions in exchange for payment.