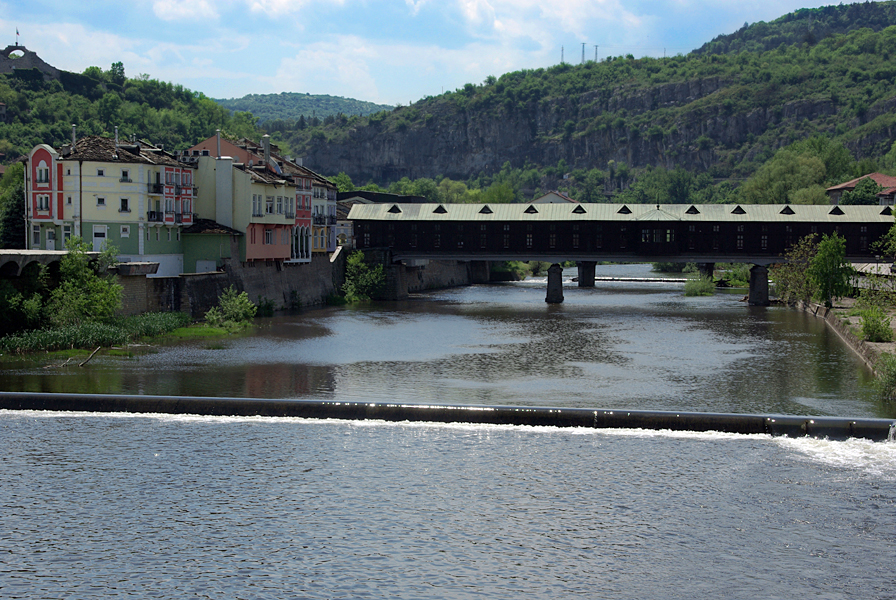 The covered bridge in the town of Lovech is one of the town symbols and one of the most often visited local landmarks.

In the end of the 19th century the residents of Lovech contacted the self-educated builder Kolyu Ficheto with the request to build a covered bridge with shops. He started the construction in 1874 and completed it in the winter of 1876.

The bridge was 10 meters high and 84 meters long. Its foundations were made of stone, and the rest of it – of wood. 64 workshops and commercial shops were situated along it. They were servicing a large part of the residents of Lovech and the nearby villages. The covered bridge was decorated by four sculpture figures – a lion, a two-headed eagle, female bust, and a stick with a mace. Nowadays only the figure of a lion is preserved.

In August 1925 fire destroyed the bridge. A new covered bridge made of reinforced concrete was built in the period 1927 – 1931. Later it was reconstructed so it can look as close as possible to the original bridge of Kolyu Ficheto.

The covered bridge connects the new part of the town with the old part – an architectural and historical reservation “Varosha”, where the museum of Vasil Levski and the Ethnographic Museum are situated.

Little shops, a cafeteria and a pastry shop are situated along it. A beautiful view towards the river and the town opens from this place.

The covered bridge is a popular place among tourists, and souvenirs from Lovech can be bought from its shops. The bridge above the Osam river is also the only covered bridge on the Balkan Peninsula.

Upon a preliminary call, employees from the Municipal Tourist Information Center in Lovech organize guided tours in the town and the nearby landmarks with a tour guide. The price is subject to bargaining and depends on the number of people in the group.