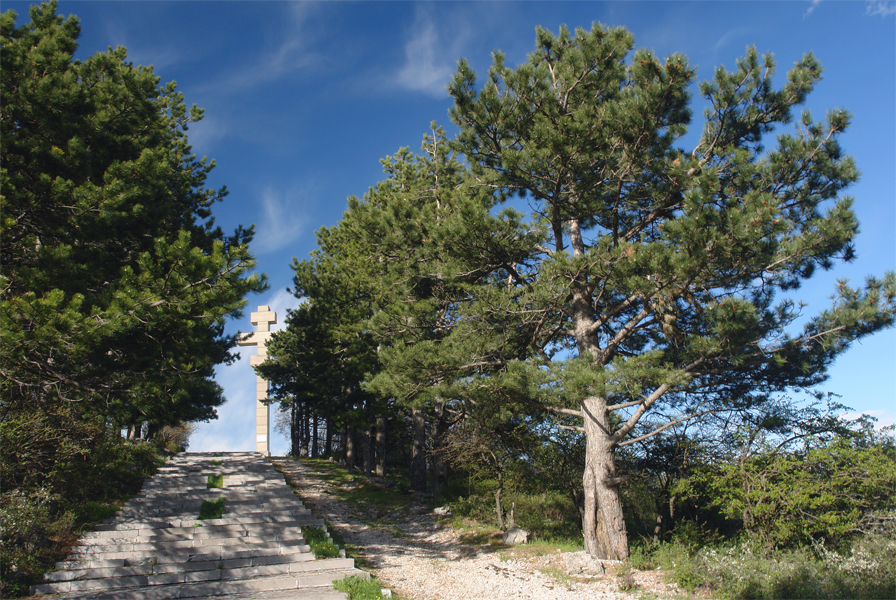 The Okolchitsa summit (1,048 m) is situated in the Vratsa Balkan Mountain, in close proximity to the village of Chelopek, about 20 km from Vratsa. A monument in honor of the deed of the revolutionary Hristo Botev and his detachment, which died in 1876 for the liberation of Bulgaria from the Ottoman Dominion, is raised on the top of the peak.

The place for the raising of the monument was selected in 1901 by a special committee in which 9 people from the Botev detachment participated. The place was selected to be accessible and as close as possible to the place of the last battle of the detachment in 1876.

The monument was raised in 1926 and represents an army cross made of reinforced concrete. It is placed on Kolova Meadow, presently known as Boteva Meadow. In 1947 a decision was made to transform the cross into a five-pointed star, and in 1991 it was restored to its original appearance.

The monument is 26.60 meters high, and the chapel “St. George” is situated at its foot. It is included in the list of the 100 National Tourist Sites. The beautiful nature around the monument and the rich history of the region attract multiple tourists and guests of the country and abroad.

A national worshipping is conducted every year on the 2 July at the foot of the monument, which is attended by state leaders and thousands of worshippers of Botev. Here the national tourist march along the way of the Botev detachment – Kozloduy – Okolchitsa – ends. It has been conducted every year since 1946.

The Okolchitsa peak is a favorite place for hang-gliders from the country and abroad and a preferred place for relaxation during the weekends.