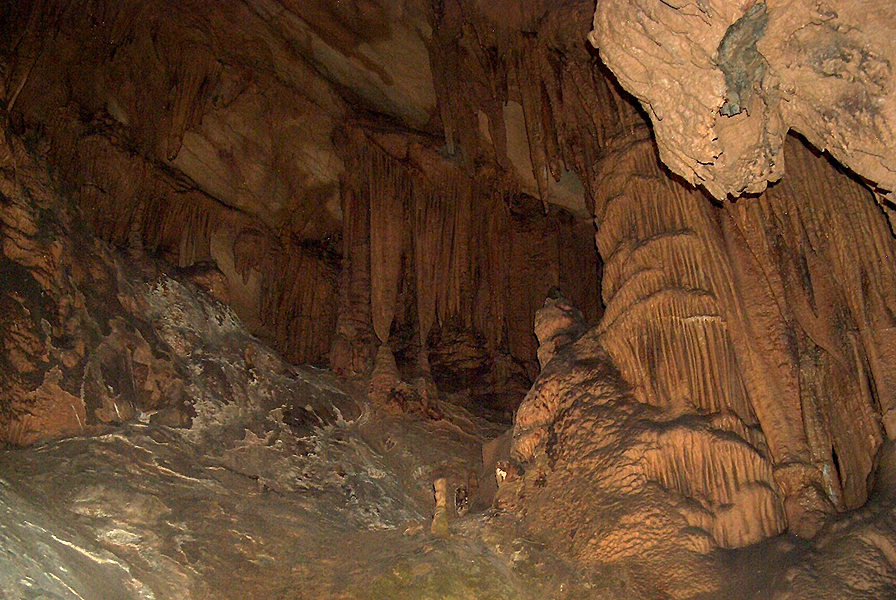 Ledenika Cave is situated at a distance of 16 km from the town of Vratsa, in the territory of Vratsa Balkan Natural Park. The cave is situated 830 m above the sea level in the north-west Stresherski section of the Vratsa mountain.

Ledenika was opened to visitors in 1961, and in 2005 its infrastructure was entirely renovated. 53 species live inside it, among which is the insect Light-hater, which has adapted so well to the darkness, that if it goes out in the light, it dies.

Its name, Ledenika, comes from the icy stalagmites, stalactites and columns, which are formed during the winter at the beginning of the cave near the entrance. There is a small, shallow sinter lake, which according to a belief fulfills the desire of everyone who puts their hand in it.

The tour in the cave takes an hour, and the route covers 350 m of the cave galleries. The walk begins with the hall called Anteroom – the lowest part of the cave, in which the icy sculptures are formed, and is the cause of its name. From the Anteroom the visitors pass through the low passage called the Plaznyata and reach a small circular hall. One more bottleneck follows in order to reach the Large Concert Hall.

A concert is conducted in it every year during the Days of Botev. The Days of Botev is conducted every year from 24 May to 2 June in Vratsa, and they are devoted to the revolutionary and poet Hristo Botev (1848 – 1876) and his detachment, who gave their lives in the fight for liberation from the Ottoman rule. In this hall the visitors can see interesting formations such as: Santa Clause, the Head of the Giant, the House of Baba Yaga, etc.

After the Concert Hall the route passes through iron bridges, through the small and the large abyss, and the corridor called the Curtains, in order to reach the White Hall.

By statute of the Council of Ministers No 2057 dated 28 November 1960, the Ledenika Cave was declared a natural landmark, and was entered in the list of the protected territories and areas in Bulgaria. It must be taken into consideration that in the cave it is forbidden to collect or destroy cave fauna, to write and paint on the walls, to enter with torches and other smoking lighting sources, as well as any activities which lead to disfiguring or destruction of the cave. The cave is also included in the 100 National Tourist Sites. There is a parking lot in front of it, and information materials and souvenirs are sold next to its entrance.