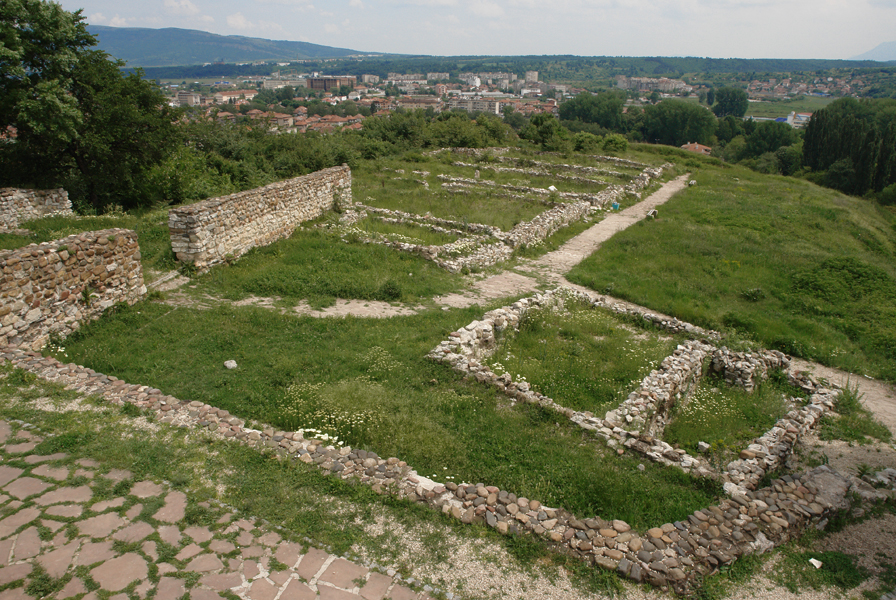 Castra ad Montanesium, the fortress near Montana, lies in the northwestern part of the town, on Kaleto Hill (Fortress Hill).

A lot of archaeological research work has been carried out on the hill, which provides valuable information about the history of Montana.

The name of the town was given by the ancient Romans and probably derived from the word Mons – mountain. However, the town itself was established way back in prehistoric times.

The first settlers came to the hill during the Chalcolithic Age. This historical period saw an important transition in people’s life. The hunters-nomads moved to a more settled way of life that involved cultivation of land and construction of permanent settlements. The area that later would be called Montana was perceived as a suitable settlement spot by the ancient people on account of its fertile land and the protection it provided. Evidence for this comes from the dwellings dated from this period discovered during excavations.

After that the place was inhabited by ancient Thracians. The Thracian tribe of the Triballi lived on the hill up until around the 1st century BC. They built a fortress for protection against raiders. What has survived of it now is several more than 1 m wide stone walls.

The Romans settled in the region in the end of the 1st century AD. They were attracted by the ore and gold deposits along the valley of Ogosta River. They conquered the Thracian fortress and used it for their own needs. During this period Montana transformed into a town-centre of Moesia Inferior Province where military units were constantly relocated to.

The town flourished under the Roman Empire. Roads connecting Montana with the other parts of the Empire were built and maintained. Apart from ore- and gold-mining, the main occupations during this period were farming and craftsmanship.

In the 3rd century AD the town suffered from the raids of Gothic tribes. This was precisely the reason behind the construction of Castra ad Montanesium Fortress on the foundations of the ancient Thracian fortress on Kaleto Hill. Barracks and a basilica were built, as well as thick fortification walls whose purpose was to stand against the attacks of invaders.

An ancient stone sanctuary lies in the vicinity of the fortress, near a large spring at the foot of the hill. It gained great popularity during the reign of the Roman Empire. The main gods of this sanctuary were Diana and Apollo. Diana, goddess of the hunt, was the patron of the town and today she is depicted on the crest of Montana. A village was established around the sanctuary. The sanctuary and the buildings surrounding it were destroyed during a Gothic raid in the 4th century.

The Roman town and the fortress were destroyed in the end of the 6th century during a raid by the Avars and the Slavs. Later the Slavs built a town of their own on the ruins, which they called Kutlovitsa. They turned one of the surviving barracks of the Roman fortress into a pagan sanctuary that has been preserved to this day. In it people worshiped either god Perun or god Dazhbog – the god of fertility, or perhaps both. The sanctuary existed until Christianity was established in the Bulgarian state (9th century).

Nowadays the fortress is partially restored. The modern-day town of Montana is located in the valley and thus Kaleto Hill remains intact of any construction work and stands as a monument of ancient history. Each of the civilizations that inhabited this spot left a piece of their culture there. The fortress is an inseparable part of Montana and it is not surprising that it is depicted on the town’s crest together with the patron Diana.

There are no admission fees to the fortress. For more information and guided tours contact the Museum of History in Montana.