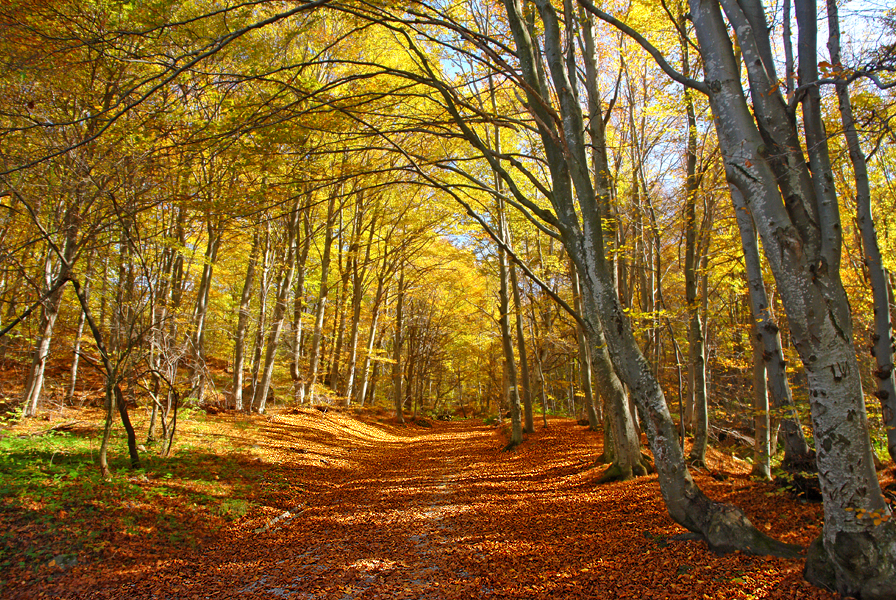 Vitosha is the first park in Bulgaria and on the Balkan Peninsula. It was declared a national park on 27 October 1934. In2000 the park was categorized as Natural. Nowadays its territory is 27,079 ha. Two reservations are situated on its territory (biosphere reservation “Bistrishko Branishte” (Bistritsa Forest Reserve) and reservation “Torfeno Branishte” (Turf Forest Reserve), as well as one natural landmark (the Duhlata Cave).

The “Bistrishko Branishte” reservation is situated on the north-eastern slope of Vitosha, below the Golyam Rezen peak(2,277 m) and Skoparnik peak (2,226 m). It was established in order to preserve a section of a broad-leaved forest and the alpine grass vegetation located above it. Its borders have changed a number of times. At the present moment the reservation territory is 1,061.60 ha. In 1977 UNESCO declared the Bistrishko Branishte reservation a biosphere reservation.

The “Torfeno Branishte” reservation was establish in order to preserve 144.1 ha turf lands and abundant marshland vegetation in the alpine section of Vitosha.

The longest cave in Bulgaria called Duhlata is situated in the locality of the village of Bosnek, on the left bank of the Struma river. Its length is over 18 km, and about 15 km of these have been researched.

The vegetation of Vitosha Natural Park is extremely rich and diverse. About 500 species of freshwater algae, 805 mushroom species, more than 360 lichen and moss species, 1,489 higher plant species have been recognized.

The mountain is characterized by rich and diverse spineless fauna. 148 endemic species (Bulgarian and Balkan), 300 rare species and 85 relic spineless species can be seen here.

In the middle and upper currents of the rivers the basic species of the river include (Balkan) trout (Salmo trutta fario). 22 species of amphibians and reptiles have also been found in the park.

During the seasons, one can observe approximately 200 bird species on Vitosha, as about 120 of them are nesting birds. One of the most typical inhabitants of the spruce forests is Nucifraga caryocatactes. Here you can see Regulus regulus, Parus ater, Loxia curvirostra, Carduelis spinus, Falco tinnunculus, Buteo buteo, Buteo rufinus, Strix aluco, Asio otus, Athene noctua, Aegolius funereus, etc.

By now, 13 bat species have been discovered here, as they are mostly seen in the caves of the Bosneshki karst region. All bat species are protected by the Biological Diversity Act.

Royal stag (Cervus elaphus), deer (Capreolus capreolus), wild boar (Sus scrofa), bear (Ursus arctos) and wolf (Canis lupus) are some of the larger mammals which can still be found in the calm places of the mountain.

The stone rivers (also known as moraines) and the screes are typical for the Vitosha Park. The stone river in the locality of The Golden Bridges (1,390 meters altitude) is impressive. There are many tourist paths in this part of the mountain: leading to the Kopitoto peak, “Momina Skala” hut and “Septemvri” hut. The Golden Bridges is one of the most often used starting points for Charni Vrah peak.

Ten of the Vitosha peaks are situated at an altitude of over 2,000 meters, as the highest of them is Cherni Vrah (2,290 meters). It rises in the central part of the mountain.

Struma River springs from Vitosha. This is the longest river in southwest Bulgaria.

Vitosha is a preferred place of resting for many residents of the capital. The Arboretum established in 1952 is situated in the localities of Balabanovets and Kiselishte. It occupies an area of 1,400 dca with an average altitude of 1,175 meters and presents an exposition of over 350 species of Bulgarian and foreign trees and bushes. The constructed walking alleys, alcoves, fountains, tables, deck-chairs, and the two lakes create conditions for complete relaxation. A botanical alley for blind people was constructed in the locality of the Arboretum in 2000. Its length is 610 meters, there are 26 vegetation species there, and descriptions in Braille letters are provided for each of them.

A sports and information alley for people with disabilities of the locomotory system is constructed in the Arboretum. It is 285 meters long and 2 meters wide. A children’s informational and entertainment center is constructed in the Arboretum. It is situated on an area of 20 dca, with 3 platforms and multiple game installations. The Bear Museum is also situated nearby. It was built at the place of a demolished substation.

The Nature Protection Information Center “Vitosha” is the first one of the range of informational and educational centers on the protected territories in Bulgaria. It is situated at a distance of about 1 km from the Dragalevtsi residential area, in close proximity to the Dragalevski Monastery. The center offers a permanent exposition, tourist information, a rich video collection, an observation tower, a base for conducting green schools, education practicums, an exhibition area, a library, etc.

The National Park Information Center is situated in Sofia, on Vazrazhdane Square, 17 Antim I Str. It provides information about the protected territories in Bulgaria and the world. Tourist cards and specialized issues dedicated to the diversity of plant and animal species in the Bulgarian parks can be bought there.

The Vitosha mountain is also a popular destination for the admirers of winter sports. Being in close proximity to the capital,it is very convenient for residents or guests of Sofia to visit. There are two ski centers in the mountain– Aleko and Konyarnika. Aleko they are situated at an altitude of 1,800 meters, its tracks are north, and conditions are available for night skiing. The Konyarnika is situated at an altitude of 1,507 meters. The total length of the tracks on the mountain is 29km, as the longest of them is 5 km long, and the maximum displacement is 780 meters. The tracks are suitable for advanced, as well as for beginner skiers. The required installations are available on all ski tracks: a number of seat lifts, one cabin lift, starting from the outskirts of Vitosha and almost reaching the mountain top.