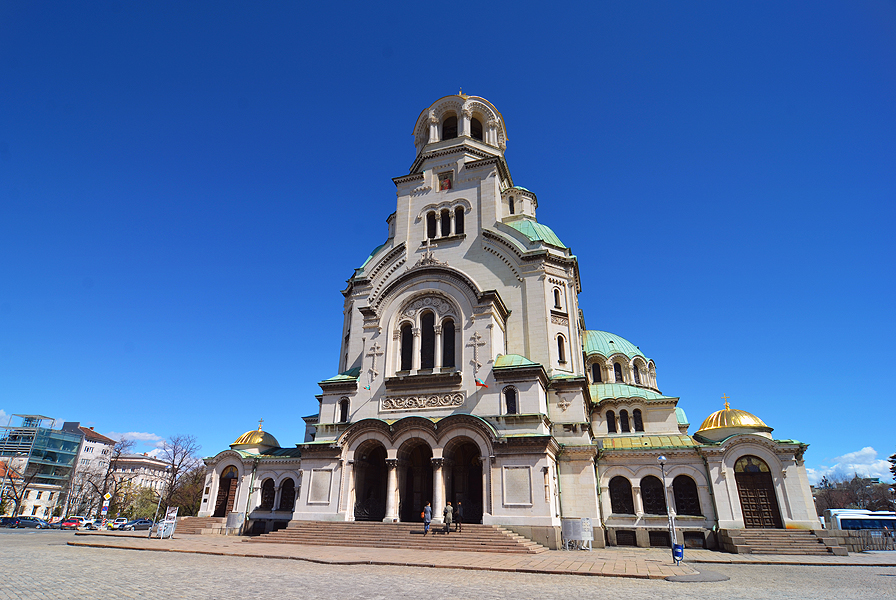 The cathedral temple “St. Alexander Nevsky” is considered a symbol of the Bulgarian capital. It is located in the center of Sofia, at the eponymous square. The reflection of its golden domes attracts attention from miles away.

The temple was built on the proposal of the Bulgarian politician and public figure Petko Karavelov (1843 – 1903). Initially it was decided to build the temple in Veliko Tarnovo, but the Bulgarian Prince Battenberg (ruled 1879 – 1886) insisted for it to be in Sofia. Part of the funds for the temple construction was granted by the state budget and donations from prominent citizens, including Prince Battenberg, who donated 6,000 golden leva.

In accordance with an old custom, a metal box with the names of the government members and the reasons for the building of the temple was embedded in the building foundations. The designers sought help in Russia. 5 ready projects were sent from Sankt Petersburg. Knyaz Battenberg chose the project of architect Bogomolov, but the project was later rejected due to various reasons. Meanwhile, Bogomolov died and the eminent professor of the Art Academy in Sankt Petersburg – Alexander Pomerantsev was chosen for chief architect.

The building covers an area of 3,170 square meters and can accommodate up to 5,000 people. The whole building was lined with white Vratsa stones; the entrance doors were made of Slavonia oak. The domes of the temple are covered with gold. The bell tower is 53 meters high and has 12 bells, the heaviest of them weighing 12 tons, and the smallest one – 10 kg. Their ringing can be heard from a radius of 15 kilometers.

The temple interior is unique – it impresses with its magnificent marble decorations, with its mural paintings and 82 icons, made by Bulgarian, Russian and Czech artists. The marble iconostasis, the royal and patriarchal thrones and the pulpit are of greatest interest for the visitors of the temple. Another valuable item is the mosaic mural of Tsar Ferdinand (ruled 1887 – 1918) and Queen Eleanor.

The crypt is located in the basement of the church – it has a collection of icons, where visitors can see many masterpieces of the iconic art paintings.

As a monument, the temple has no parish and doesn’t offer other services besides the daily, Sunday and Festival worshipping, such as baptism, weddings and funerals, only with some exceptions – the wedding of Tsar Boris the 3rd (ruled 1918 – 1943) with Princess Giovanna of Savoy in 1930, his funeral in 1943 and the funerals of Patriarch Cyril in 1971 and the funeral of the great opera singer Boris Hristov in 1993.