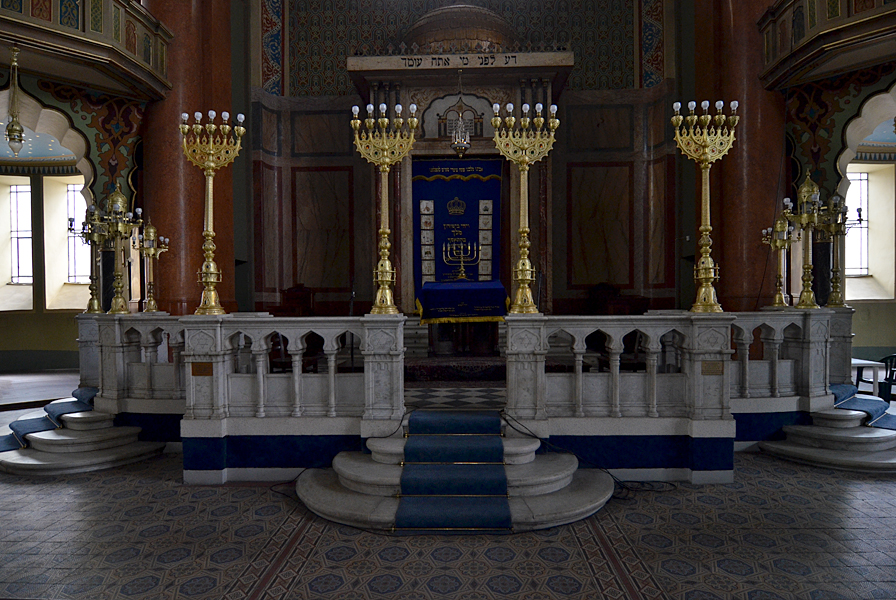 The largest Sephardic (in Spanish – Jewish) synagogue in Europe is situated in Sofia on the corner of the streets Ekzarh Yosif and G. Washington. This is the only Jewish house of prayer in Sofia. The Sofia Synagogue is one of the most beautiful architectural monuments in Bulgaria.

It was built where the old synagogue Ahab and Hased (in Hebrew– Love and kindness) used to be. Its building was finished in 1909. The royal family– king Ferdinand (reigned 1887 – 1918) and queen Eleonora attended its sanctification.

The architecture of the Sofia Synagogue is magnificent. The temple consists of a central domed building and a narthex. The prayer hall is in an octagonal shape. There are semicircular niches with rectangular premises between them in the four corners of the hall. The prayer room for the women is situated over the niches. The main chandelier weights two tons and is the biggest one in Bulgaria. An altar, surrounded by a beautiful railing, stands on a platform of white marble.

The capacity of the hall is 1,170 seats. The interior is decorated by articles of the applied art. The facades are richly decorated with architectural elements, plastic ornaments and stone carvings. The floor of the synagogue is covered by Venetian mosaic.

The headquarters of the Chief Rabbi of Bulgaria and the Chief Rabbi of Sofia are situated in the building. The Central synagogue regularly conducts public worships. It was only closed during the period 1943 – 1944, when most Jews from Sofia were deported to the province. During the bombing of Sofia in 1944 the Synagogue was partially destroyed. The balcony and several columns in the main hall were affected. The famous Jewish community library was destroyed.