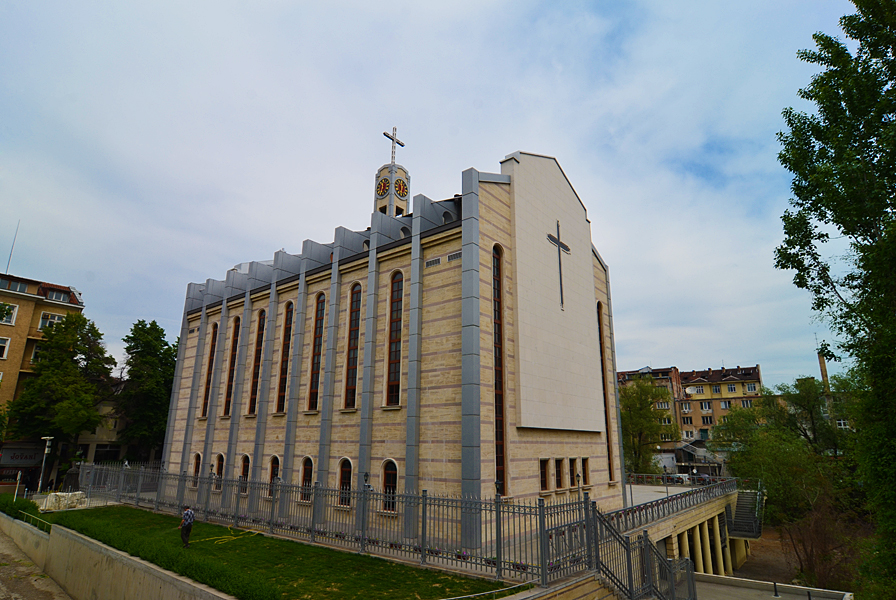 The Roman catholic cathedral “St. Joseph” is situated in the center of Sofia, near “St. Nedelya” square.

The construction of the temple began in October 1875. The parish priest of the St. Francis Order of the Little Brothers – the Italian capuchin priest Timothy of Biela – has an outstanding contribution to the temple construction. As a developing capital city in the early 20th century, Sofia attracted many people from Western Europe. Many Italians, Czechs, Hungarians, Frenchmen came to the city, most of whom were Catholics and gradually the parish increased from 50 families to 2,000 people. Over the years, culture and educational activities developed in the parish, a hospital and a school was built.

In March 1944 after the bombing of Sofia, the cathedral temple was completely destroyed. Since then only the statue of Virgin Mary of Lourdes was preserved. For over 50 years, the Catholic community in Sofia held its meetings and worships in a small hall near the site of the destroyed temple.

In 2002, during his visit to Bulgaria, John-Paul the 2nd consecrated the new temple construction. The new building of the temple was opened and solemnly consecrated by the Vatican secretary Cardinal Angelo Sodano in May 2006.

The new building of the temple impresses visitors with its size – it is 23 meters long, 15 meters wide and 19 meters high. The bell tower is 33 meters high. There is a 7-meter wooden Cross of Christ over the altar in the temple. There is also a small ground at the rear, which reveals a beautiful view of the area.

The temple is managed by the Order of the Capuchin Little Brothers, established by St. Francis of Assisi.