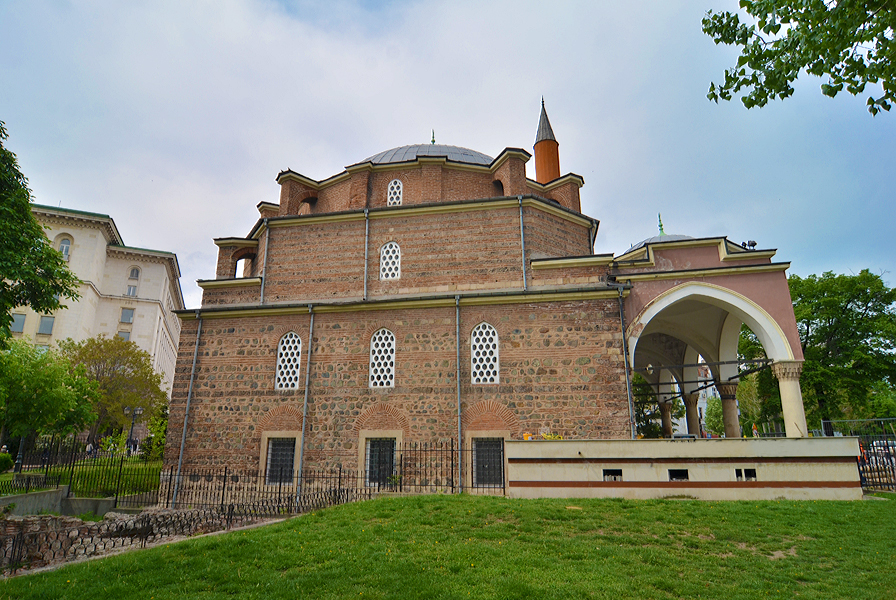 The mosque Banya Bashi is situated in the center of Sofia, on Maria Luisa boulevard. It was built by the initiative and with the financial support of Mullah Effendi Kada Seyfullah and is also known as Mollah Effendi Mosque. It was designed by the famous Ottoman architect Mimar Sinan, who also built the mosque of Sultan Selim on Edirne and the Suleymaniye Mosque in Istanbul.

Because of the number 974 above the entrance arch, the mosque is considered to be built in 974, the Hijri (Islamic calendar) or in 1566 – 1567 AD. The main building has a square shape and four corners and one central dome, and a minaret. There is an outhouse (tetimme) with three small domes in the front part of the complex, built in memory of Kada Seyfullah Effendi’s wife.

The mosque was built in accordance with the trends in architecture in the 16th century. It was made of stone and bricks. There are small towers on the four floors, under which the supporting facilities descend through hoops.

The prayer hall and the arches are completely made of stone. The columns were carved of one full stone piece and are of opaque color, the dome is lead-plated.

Several restorations had been made to the mosque. The last major renovation took place in the 1920s.

Nowadays, a public worship with about 500, and during Bayram – with nearly 1,000 believers, is carried out every Friday in the mosque.