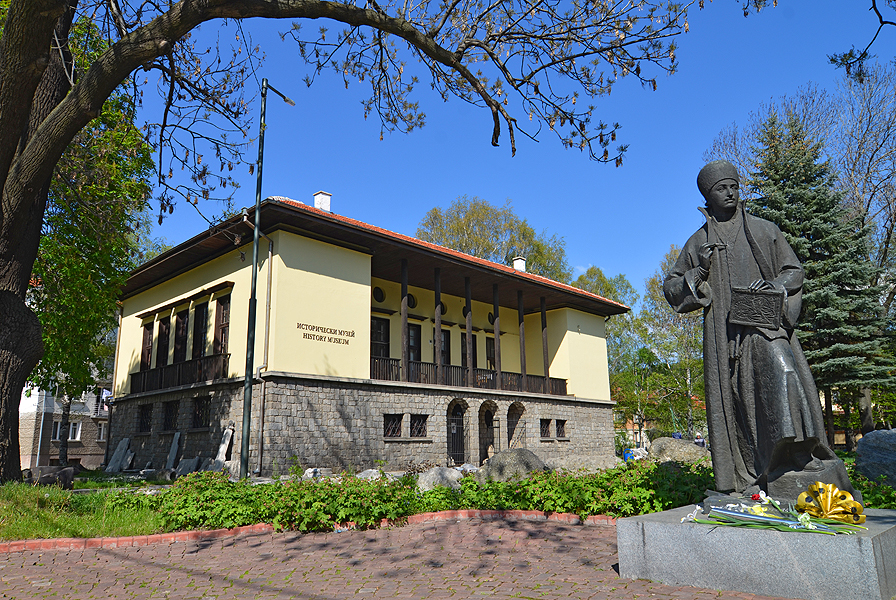 The city of Samokov is located in the foothills of the Rila Mountains, 60 km from Sofia and 10 kilometers from the Borovets Ski Resort. The museum collection is dedicated to the city’s history. The name Samokov comes from the water-powered mechanical hammers used to work with iron, called “samokovi” in Bulgarian, which indicates the importance of ironworking for the city’s inhabitants in times past.

The museum began its collection in 1930, and opened to the public in 1936. The building which now houses the historical museum was built in 1940.

On the first floor there is an exhibition called “Samokov – Soul and Metal.” It shows how Samokov became an important center for iron production. Archeological finds demonstrate that there is a long tradition of metalworking in the region. One of the most interesting displays shows small-scale working models of cauldrons for pouring molten metal and the “samokovi” – the mechanical hammers.

The museum’s display of tools presents the region’s traditional handicrafts during the Bulgarian Awakening (19thcentury), such as homespun weaving (the production of rough woolen cloth), pottery making, and the considerable skill of coppersmiths. There is also a display of antique jewelry production – the shaping and working of semiprecious stones in antique settings. Another interesting exhibit is glasswork from a factory opened in Samokov in the 19th century, where the much-admired glaziers from Karlovi Vari were employed.

Visitors to the museum may also view an exhibit of clothing and textiles typical of Samokov and the surrounding region. The influence of Western Europe and a desire to dress in modern fashion is evident in the women’s clothing on display from the second half of the 19th century, which is of a decidedly European cut, along with imported watches and ornate accessories.

During the Awakening, the village was an important educational center in Bulgaria – as illustrated by the many photographs of students and s. Here visitors can see the first Bulgarian printing press (1828), used by Nikola Karastoyanov (1778-1874), one of Bulgaria’s first publishers, and an edition of Bulgaria’s first newspaper, Liuboslovia(Philologia, or Love of the Word), published by the social activist and philologist Konstantin Fotinov (1790-1858).

The museum’s second floor offers an exposition of the Samokov School of painters from the 17th century to the beginning of the 20th century. On display are works by the school’s first exponent, Hristo Dimitrov (1745-1819), and work by his sons Dimitar (1796-1860) and Zahari Zograf (1810-1853). Visitors may view portraits from the period of the Awakening, including those by Stanislav Dospevski (1323-1853). Artists’ paints, brushes, and personal effects complete the display. Works by these and other artists may also be viewed at the Samokov Art Gallery.

In the village of Belchin, some 15 km from Samokov, there is a museum complex affiliated with the historical museum. Included in that complex are the Saint Petka Church and an ethnographic museum.

Informative materials, postcards, and souvenirs are on sale at the Samokov Historical Museum.