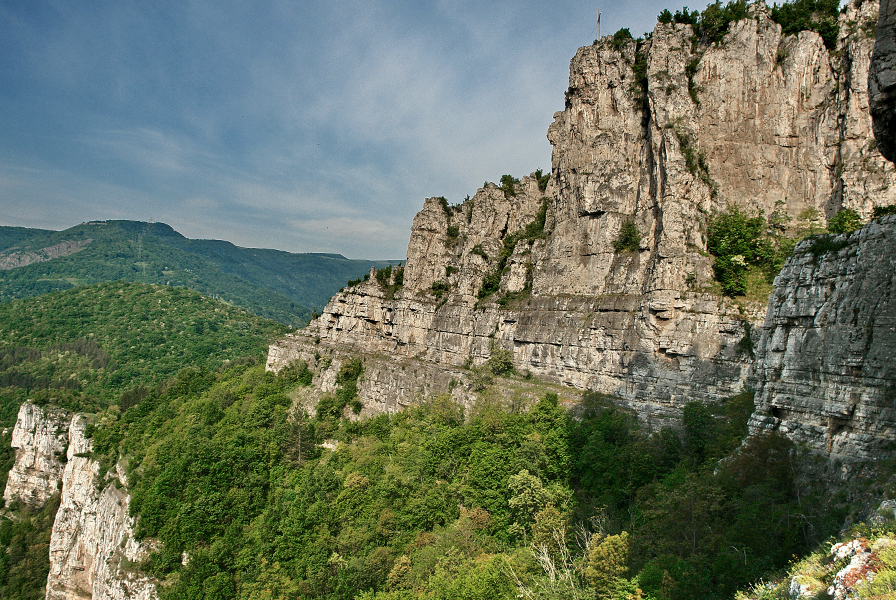 The Lakatnik (Elbow) Cliffs are located on the left slope of the Iskar Gorge in the Stara Planina (Central Balkans), above the Lakatnik train station. The whole region got its name from the bend in the Iskar River, which resembles a bent human elbow. The sandstone and limestone cliffs rise some 250 meters, and over the years the force of the wind has carved a variety of fantastic shapes in them, such as towers, stone needles, and pyramids. The forces of erosion have also carved more than 100 caves in the limestone cliffs, the longest being the natural wonder Temna Dupka (The Dark Hole), which is 9 km long. The cliffs were declared a protected area by Decree № 407 on February 9, 1966, with the goal of preserving the general character of the environment and the rock formations, caves, and important plant and animal life, including the only verified population of the Bulgarian medicinal plant Silene velcevii.

Besides being the habitat of fascinating Bulgarian flora and fauna, the cliffs also attract rock climbers, spelunkers, and hikers.

The Lakatnik Cliffs are justly famous among climbers – there are 6 separate climbing areas with more than 350 routes of varying difficulty. The most popular are the Vrazhi Dupki (The Enemy Holes) and Alpiyski Polyana (Alpine Meadows). The Vrazhi Dupki are located in the Proboynitsa River canyon, a tributary of the Iskar. This massif stands on its own, and is an excellent example of the way limestone weathering can produce formations characteristic of caves, such as overhangs and outcroppings. It is an ideal place for climbing enthusiasts, with some routes suitable for beginners and others of extreme difficulty.

The other especially popular destination is Alpiyski Polyana. The location is easily visible from a distance, because of the small house that has been built on one of its cliff faces, known as The Eagle’s Nest. The route begins at a narrow path on the upper part of the massif that is equipped with metal guardrails and is only reachable with the aid of climbing equipment.

The Lakatnik Cliffs was one of the first places in Bulgaria where climbers tested their skills, but more and more visitors come to visit the caves, particularly The Temna Dupka Cave, which is the third longest cave in Bulgaria. It has been the subject of study for many years, and continues to fascinate speleologists. Other interesting caves in the region are The Kozarska, Zidanka, Rashishka and Svinska Caves, among many others. The caves in the region remain undeveloped and can only be explored with proper equipment and the aid of an experienced guide.

But this natural phenomenon is not just for tourists interested in extreme sports. Near the cliffs there are a number of hiking trails accessible year round that offer excellent views of the beautiful Iskar Gorge.

The Lakatnik Cliffs are rewarding for a visit of a few hours or many days. Open-air camping is permitted in the area, and there are plentiful campsites. The Lakatnik Cliffs’ proximity to Sofia and the ease with which they can be reached make them a very attractive vacation destination.