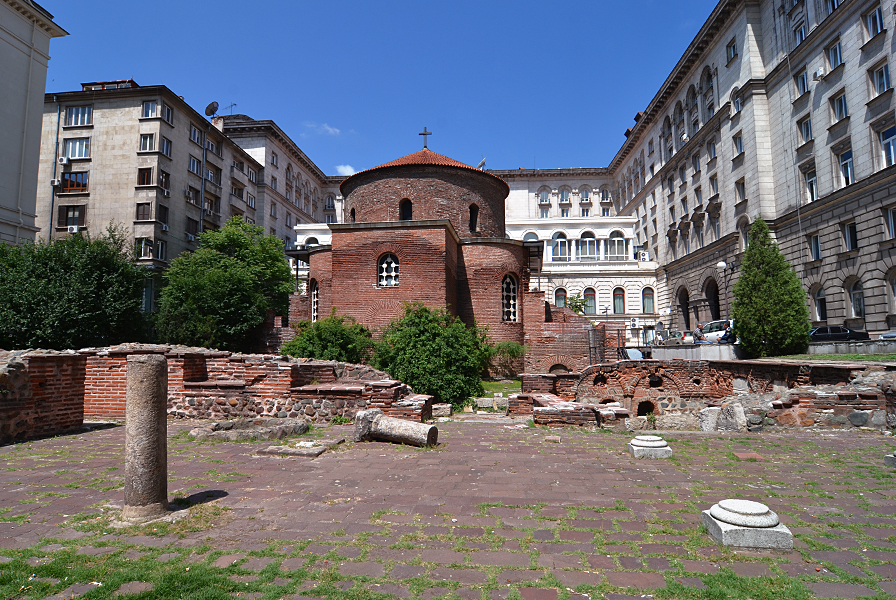 The oldest and best-preserved monument of architecture since Roman times in Sofia is the rotunda church St. George. It was built in the beginning of the 4th century AD and, was considered, during the reign of the roman emperor Constantine the Great (reigned 306 – 337) and the flourishing of the ancient town Serdika (the old name of Sofia). It is believed that the rotunda is the oldest building in Sofia.

The temple is situated in the courtyard of the Government Office, just a couple of meters of the remains of the ancient fortress Serdika. It is a cylindrical domed structure, built on a square base. Its width is about 9.5 meters in diameter and its height is about 14 meters. The altar room has a square form and four symmetrically placed niches. The main entrance is at the western wall.

Originally the building was used for public purposes. After the recognition of Christianity as a religion in the Roman Empire, the rotunda became a baptistery (a building for conversion to Christianity), due to the many conversions, following the authorization of this religion.

At the time of Emperor Justinian the Great (reigned 527 – 565) the Rotunda was transformed into a church. The first wall painting was made in the same period. It is assumed that since then it bears the name of St. George the Martyr, who suffered for his faith in Minor Asia in the 3rd century, under the reign of Emperor Diocletian (reigned 284 – 305).

During the Ottoman rule and the reign of sultan Selim the 1st (reigned 1512 – 1520) the Rotunda St George was transformed into a mosque, named Gyul Dzhamasi. The Christian paintings on the walls were obliterated with white plaster and in their place were painted floral motifs.

After the liberation of Bulgaria in 1878 the Rotunda was deserted, and after the death of Prince Alexander Battenberg (reigned 1879 – 1886) it was transformed into a mausoleum.

Its restoration began in 1915. Nowadays the temple is operational and performs daily worships in the Eastern church singing, also known as Byzantine music.