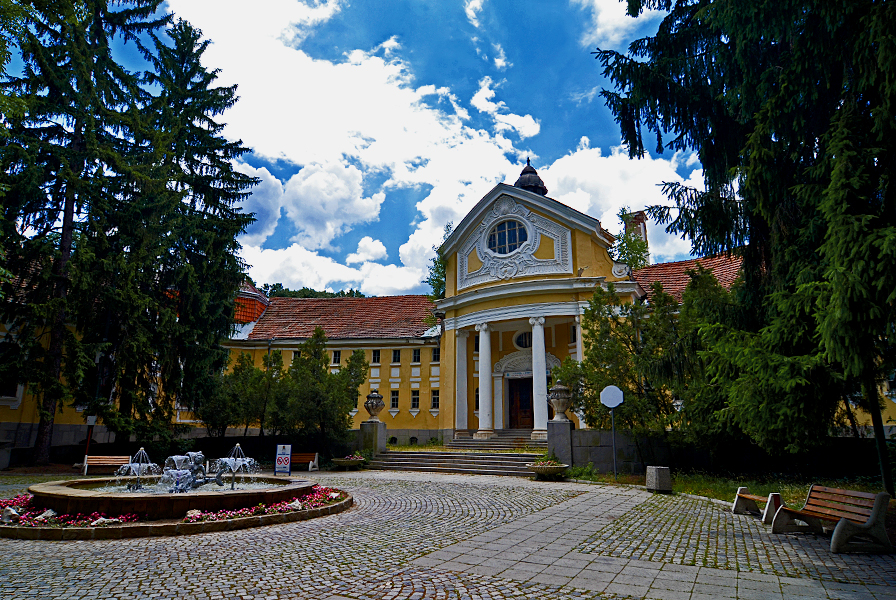 The town of Bankya is situated at a distance of 17 km west of Sofia, at the foot of the Lyulin Mountain, at or around an altitude of about 700 meters. Its population is about 9,500 people. The climate in the region is temperate continental, with an average January temperature of + 2o C and an average July temperature of +19.6° С. The tranquility of the mountain, the fresh air and the healing water are the reason for Bankya to acquire the statute of a resort, preferred for relaxation and balneological treatment.

Bankya is famous for its mineral water, with a temperature of 36.5 – 37o C. The water has low mineralization, hypothermal, with a low level of hardness, clean, without a smell, with many pleasant taste qualities, and it is suitable for everyday drinking. It is successfully used for treatment of cardiovascular diseases and nervous system disorders. The name of Bankya is also related to mineral water. It actually means “small bath”.

The Bankya region has been inhabited for thousands of years. During archaeological excavations in Verdikal residential section, remains of Roman buildings, walls, sewerage, and bronze jewelry were found.

From the middle of the 19th century to the Liberation from the Ottoman Dominion in 1878 Bankya was a farm of an Ottoman military leader. In the middle of the farm there was a powerful spring, which was filling a small pool in the bathroom of the leader. Bulgarians were not allowed to take baths in the water; they were only allowed to get in the healing mud of the nearby swamp only once a year. This was happening at the memorial day of the church “St. Martyrs Kirik and Julita”, which is presently celebrated on 15 July. This is where the tradition to celebrate the traditional days of Bankya – “Goreshlyatsi” on 15th, 16th and 17th of July – comes from.

After the Liberation, Bulgarians bought back entirely the lands of the leader’s heirs, and in the end of the 19th century the first hotel was opened here. Soon after that the mineral springs in the region were piped. The building of the first public bath in the town was built in 1906. It was called: “The Small Bath”. In 1910, according to a project of the Munich architect Karl Hocheder, one of the most famous European specialists of balneological installations, the “Large Bath” was completed. With its monumentality and functionality, it is one of the most famous symbols of Bankya.

There are many interesting landmarks in the region of Bankya. Among them are the following: the church “St. Cyril and St. Methodius”, the temple “Martyrs Kirik and Julita”, built in 1932, as well as the church “St. George” in Ivalyane, built on the ruins of an old votive temple from Roman times. “All Saints” in Vedikal residential section is the oldest Christian temple in the region of Bankya. It is believed that it was built immediately after the Boyana church (10th – 11th century).

The monastery “St. Petka” is situated at a distance of about 7 km from the center of Bankya, in the village of Klisura. It was established in the 13th century. Presently it is an operating nunnery. Accommodation is offered in it, but the proximity to Bankya facilitates tourists. The memorial day of the holy monastery is the 14th of October.

Another monastery in the Bankya region is the Divotinski monastery. It is situated 5 km southwest of the town. Its history is unclear, but legends say that it was established in the years of the reign of Tsar Peter (927 – 969).

“Vazor’s Oak” is another popular place in Bankya. This was the favorite place for relaxation of the great Bulgarian writer Ivan Vazov (1850 – 1921).

As a popular tourist destination, Bankya offers good relaxation options to its guests. There are modern balneological complexes in the complex, offering advanced equipment for examinations, physiotherapy and rehabilitation. In a part of them there are mineral pools, saunas and fitness halls. Qualified specialists take care of the patients.

In the resort there are also modern SPA centers, many private hotels and restaurants, and the proximity to the capital gives the option for Bankya to be visited within one-day trips.