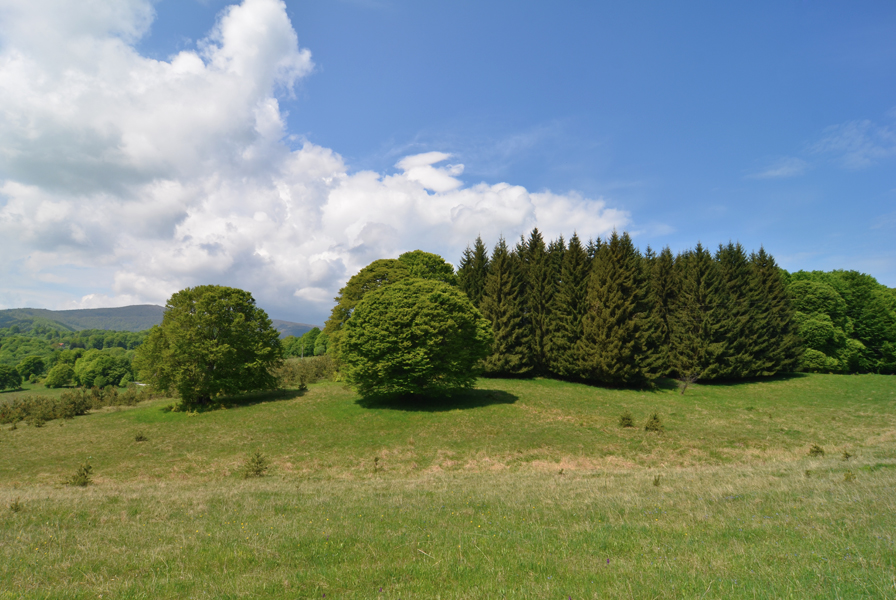 The Osogovo Mountain Range is located in the western part of Bulgaria, on the Macedonian border. The region was declared a protected reserve by Declaration № RD-780 on October 10, 2008.

The tree cover is thickest on the southern and southeastern slopes of the range. The forests are mainly beech, with some black pine and common spruce. The undergrowth consists of common bent grass (Agrostis vulcaris), Volga Fescue (Festuca valesiaca), the Festuca nigrescens species of tufted grass, and others. Sesleria comose grasses, the tufted fescue Festuca airoides, creeping sibbaldia (Sibbaldia procumbens), and Poa cenisia can be seen in the higher elevations, near Ruen Peak (2251 meters).

The Osovogo Range is home to 27 separate natural habitats, 15 mammal species, 5 kinds of amphibians and reptiles, two species of fish, and 8 species of invertebrates. There are 94 different kinds of birds in the reserve – 17 of them are protected under biological diversity regulations, 11 species are listed in Bulgaria’s Red Book (a listing of Bulgaria’s endangered species, and 30 types are protected by conventions related to bird migration. Among the protected species are the Long-eared Owl (Asio otus), The Barn Swallow (Hirundo rustica L.), the Red-rumped Swallow (Hirundo daurica), the Tree Pipit (Anthus trivialis), the White-throated Dipper (Cinclus cinclus), the Goldcrest (Regulus regulus), and others.

There are five kinds of vegetation protected by international regulations, including the Green-winged Orchid (Orchis Morio) and the Giant Snowdrop (Galanthus Elwesii).

Also protected under biological diversity regulations are the Globe-flower (Trolius Europaeum), the woodland Columbine Aquilegia Nigricans, and three other types of plant life.

Osogovo is also home to many medicinal plants, such as the Saint John’s Wort, Red’s Wort, Thyme, Mint, Grid (Carlinae), Black Lace Elderberry, the Adderwort, the Common Cornel-tree, and others.

Among the mammals often encountered in the reserve are the Wild Boar (Sus scrofa), the European Badger (Meles meles), foxes (Vulpes vulpes), and wolves (Canis lupus), among others. Fish that live in Osogovo are the ray-finned fish Barbus cyclolepis, the European chub (Leuciscus cephalus), the Common Nase (Chondrostoma nasus), The Balkan trout(Salmo trutta fario), and others.

There are a number of marked trails in the reserve, of different length and duration. Some begin in Kyustendil, others in villages nearby. Some of the trails lead hikers to the region’s highest peak, Ruen. In the Osogovo region there are a variety of options for overnight accommodations, such as hotels, shelters, and guest houses.

The Osogovo Tourist Association can provide further information about hiking trails in the region.

These are the marked trails: