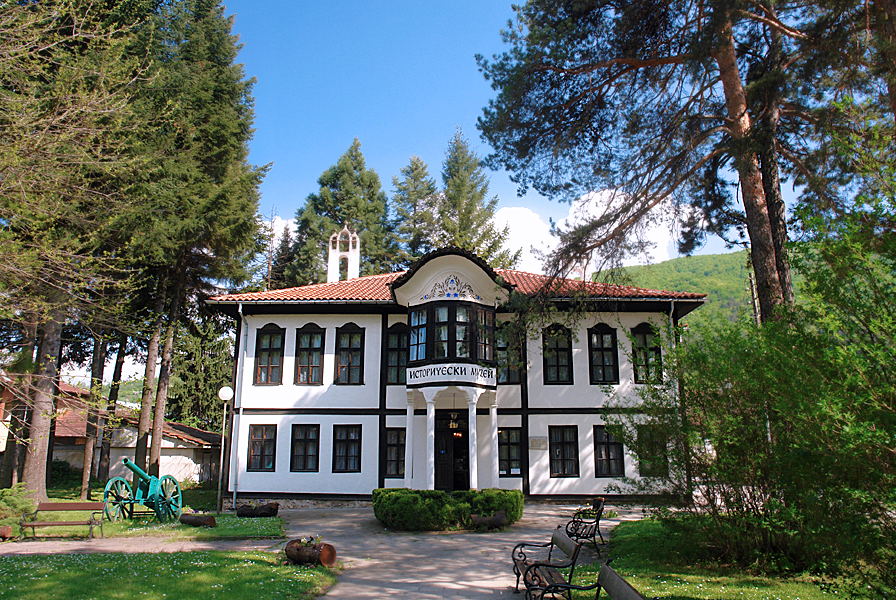 Etropole (11 000 people) is a town in Stara planina (Old Mountain, the Balkan) located 80 km northeast of Sofia and 13 km away from Pravets.

The History Museum in Etropole launched its first exhibition in 1958. Ten years later, in 1968, the second exhibition of the museum was opened in the restored building of the former Turkish police office. The museum of Etropole is still housed there. The building was constructed in the period 1853 – 1870. This is the second public building in Etropole after the Clock Tower (1710) that has survived to this day. The ten halls of the museum tell about the past of the Etropole Region.

Visitors will find there the oldest pieces of evidence of life in the Etropole Valley which date back to the Bronze Age (circa 3rd – 2nd millennia BC). Stone axes, hammers, vessels used by Thracians in their everyday life, clay urns, amphorae, etc., are displayed in the Archaeology Hall.

The ethnographical exhibition is spread around four of the halls of the History Museum. It exhibits 19th century everyday items, clothes and adornments, articles made by local craftsmen in the period 16th – 20 centuries, photographs and documents. Visitors can see various tools used by the old Etropole ore-miners – shovels, pliers, mining lamps, wooden ladders, etc. Works of blacksmiths, cutlers and other craftsmen are presented there.

The filigreed mother-of-pearl pafti (metal belt buckles worn by women) which are typical  for the region are displayed on the first floor of the main building. Visitors will also find bracelets, rings and earrings made by local masters there. Typical sarakatsan clothes are put on in one of the glass displays. The sarakatsani are a Greek-speaking community in Bulgaria. The other museum exhibitions preserve 16th-17th-century items related to the Etropole Literary School and follow the development of education in the region. Weapons, orders, medals, documents and photographs provide information about the participation of local people in the wars for national liberation and unification.

A recreation of the Etropole urban revival lifestyle from the mid-19th century is displayed in Arnaudov’s House, a branch of the History Museum. Arnaudov’s House is a typical house from the Bulgarian Revival Period. It is believed to be built around 1850 – 1860 and belonged to Nikolcho Arnaudov, a merchant and currier form Etropole. The house has two floors and a large veranda. The tannery and the cattle-sheds were situated on the ground floor. In 1980 the house was restored and the museum exhibition was opened. The traditional arrangement of the kashti – the main room that functioned as a kitchen and a living-room, is demonstrated in Arnaudov’s House. Visitors can see the arrangement of the household utensils, the fireplace with the chain and the cauldron, the weaving loom, etc. there. From the kashti the visitors enter the soba – the bedroom of the family. The plank-bed is covered with rugs, home-weaved pillows are arranged by the wall, and a baby cradle hangs from the wooden ceiling.

The odaya – the room which was used for guests, shows Western European influences. Visitors will find a wooden bed with a dressing table and a mirror there. A table with Vienna chairs, a gramophone, an accordion, and a clarinet are arranged in the centre of the room. The wood-carvings and the wooden ceilings made by local master carvers are an inseparable part of the interior of the house.

The building of the museum, Arnaudov’s Hause, and the Clock Tower were all declared architectural monuments of culture by virtue of publication in State Gazette, issue No 37 of 1964.

Information materials, brochures, cards and souvenirs are sold at the museum. The History Museum is one of the 100 Tourist Sites of Bulgaria. Another interesting tourist attraction – the Etropole Clock Tower – is located in close proximity to the museum.